BEEP BEEP - THE MAN'S A GENIUS

STOP PRESS - See additional post just added on Jim Hall - 29th December 2007
The word “genius” is much overused today. Even in something like Motor Racing, which attracts a lot of very clever people, there are not that many. Ask yourself to create a list of Racing Car Designers who are “geniuses”, and once you’ve written the name of Colin Chapman down, most people start to think for quite a while before they write another name.

If you’re old and wizened, you might also put down Ettore Bugatti, Gordon Murray, Adrian Newey and Enzo Ferrari – although I actually think you’d be wrong with Ferrari. And if you think current F1 is still Motor Racing, I’m damned if I’d know whose name you would think of today.
Most people would not have the name of James Ellis Hall on their list. If you have, you’ll know immediately what this piece is going to be about. If not, read on.
Next clue - if the name Chaparral strikes a chord, you’ll realise now who I’m talking about. If you’re still no wiser, and racing cars interest you, keep reading because, as a Designer of racing Cars, the man is a Genius. 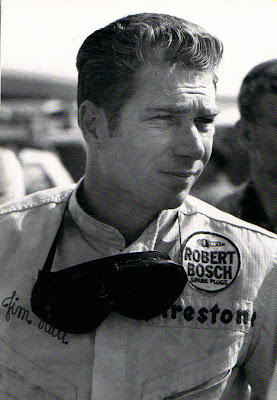 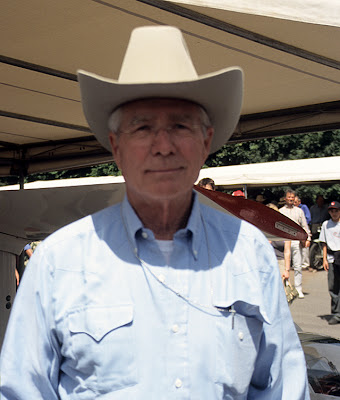 JIM HALL AT GOODWOOD IN 2004 - PICTURE TAKEN BY YOURS TRULY!

Hall is a larger than life Texan, who started life, with a little more money than the average man, looking to get involved in the family Oil business, when his parent were killed in an air crash. He studied Mechanical Engineering, and, in the late 50s was bitten very hard by the Motor Racing bug. Rather than acting like the spoiled child, he turned out to be very, very good at it, and moved through a series of Maseratis, Ferraris, and home converted Lister-Jaguars, into which he shoe-horned a large American V8.

He teamed up with a fellow competitor named Hap Sharp, and between them, and a few others, they created a new racetrack in the middle of Oil rich Texas, which they called Rattlesnake Raceway, named after some of the local residents. They both gradually became more and more serious about racing, progressively buying a wide range of modern European racing cars from Lotus and Cooper, and always seeming to come off second best in the deals. Having got increasingly fed up with never quite getting what they had ordered, they decided to build an all American Sports racing car which they would call the Chaparral, in a small factory next to the Raceway.

Hall was an extremely good driver, easily good enough to compete in the Formula 1 World Championship. He drove for the BRP team in 1963, although he soon realised that trying both to build a racing car in Texas, and to drive a Lotus 24 in Formula 1 events around the world was not going to work. So he went back home to concentrate on building his cars.

Over the next seven years, he, and a very small team of helpers, built a series of racing cars, the like of which had never been seen before, or since. In some ways, Colin Chapman was the only man who, single-handedly, did anything like the same. One of Chapman’s greatest skills was to develop some innovation which literally transformed, for all time, racing car design. He didn’t do this just once, he did it many times. For students of Lotus history, the numbers 18, 25, 49, 56, 78, 79 and 88 represent a Holy sequence of Formula 1 car designs. When each of these Lotus models wwere introduced to the despairing horde of fellow designers, they simply stood around and realised that their own lovingly and newly designed cars had, once again, just been consigned to the scrap heap. Hall had the same effect with his creations.

Hall’s credits, however, are not quite as numerous, but it happened at least half a dozen times in his career. but it's difficult to think of another individual whom you could mention in the same breath as Chapman. Indeed, I have a sneaking feeling that Chapman always took a great interest in what Chaparral were doing, and on a number of occasions, the “new” Lotus that Chapman launched onto the unsuspecting European racing fraternity, reflected a piece of Jim Hall genius which had been launched some time before.

Over the period 1963-1970, Hall and his small team built a series of eight designs of large engined Sports racing cars, which, on their day, fought and beat McLaren, Ford, Ferrari and Porsche. The sad thing about Chaparral was that, on paper, the bald race results do not them justice. Perhaps it was the simple lack of resources, or the team trying to do too much – it raced in Europe and America simultaneously, diluting the team’s focus. Perhaps it was the overall leading edge uniqueness of what they came up with that resulted in a niggling stream of reliability issues, which kept them off the podium. So often, they grabbed Pole position, Fastest lap and led races, only for some maddening little fault to bring their progress to a stop. But in Motor racing, the rule is simple “To finish First, First you must finish.” Simple, hackneyed, but true.

This does not, in any way, diminish what Hall came up with, much of which is still affecting Racing Car Design today. Allow me a second to put my anorak on, and here’s a short list –

1 - Simple,but the Spoked Alloy Wheel was one of Hall’s innovations – Still in Use

3 - The High level, Moveable Wing, (1967) which transformed the aero-dynamics of racing cars. Yes, it had been used, almost experimentally before, but Hall realised its potential, and developed it intelligently and hugely, way before other less knowledgeable engineers got it wrong, and the device was banned. Chapman, or at least his engineers were in this latter band of men, trying it, and getting it horribly wrong, a year later. This set Racing Car designers off on the aerodynamic trail, which is still vital today. Just ask Jenson Button today for his opinion when you haven’t got it right!

4 - He first designed the whole car to be an aerodynamic device. His 2H model, which came out in 1969, and looks like something out of “Bladerunner” was an (unsuccessful) attempt to treat the whole car as an inverted wing, which led to the ideas of the Lotus 78 and 79 1976-78.

5 - In 1962, he introduced the fibreglass monocoque chassis, when sheet steel and aluminium were the order of the day. Carbon Fibre was still on the secret list in those days, but you just know what Hall would have used to construct his cars, had it been available. He was that sort of man. Look at almost all racing cars today – it’s still there. Formula 1 got around to it in the early 1980s, some 18 years later.

6 - He used the Semi-Automatic transmission, to my knowledge, for the first time, and several drivers spoke of how much more time they had “driving” rather the “changing gear”. Try looking for a real gear lever today.

7 - Rear-set radiators (1967). The weight distribution was transformed, the weight went down, the aerodynamics improved, the driver didn’t fry. So simple, but Hall got there first. The Lotus 72, to my knowledge, first tried this “revolutionary” idea in Formula 1 in 1970.

8 - With his last car, in 1970, the 2J, he demonstrated Ground Effect and made it work brilliantly, for the first time. As well as the 680 Horsepower main engine, the car used an additional small Snowmobile engine, and a plastic fence to surround the base of the car. This sucked the car down onto the road, allowing enormously increased cornering speeds. It developed so much downforce, it could have held itself onto a ceiling if anyone had been daft enough to put it up there with the engine running! It was a simply devastating racing machine, with the ability to lap between 2 and 3 seconds faster (on a 60 second lap!) than anything else in the field, including the previously all conquering McLarens. To the then boss of McLaren’s eternal shame, he was the man who led the campaign which successfully had it banned. Now look at Gordon Murray’s 1978 Brabham BT46B (also banned by the authorities because it was way too good) in a new light?

Do you see the thread here, and why I think Jim Hall is such an important man in the rarified field of Racing Car people. So many times, he did it first. For someone whose name is very much NOT known in the UK, he has made a huge, huge mark on the long term history of the racing car.

I watched, with utter glee, in the late 60s, the "David and Goliath" - like progress of the Chaparrals, and when I saw that he was to visit the Goodwood Festival in 2004, with some of his lovingly restored cars, I took myself off to pay homage.

It’s not often that I get the chance to shake the hand of a Hero and a Genius. 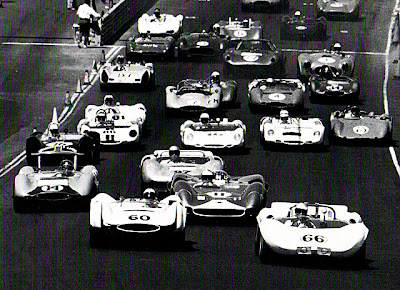 A TYPICAL START FOR THE 60s - AND YOU THINK RACING TODAY IS EXCITING! 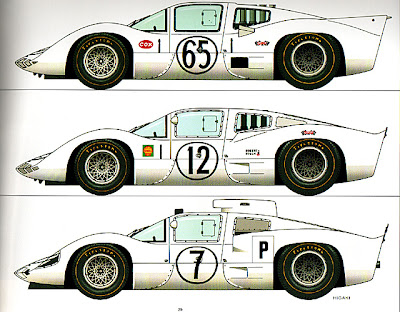 VARIOUS VERSIONS IN THE DEVELOPMENT OF THE 2D FROM 1966 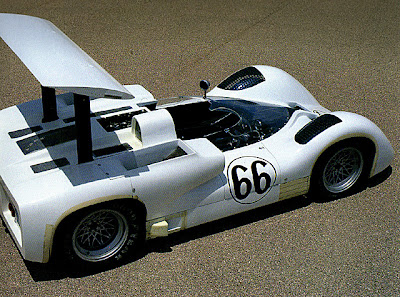 CHAPARRAL 2E - DEVELOPED FOR THE CAN-AM SERIES IN 1966 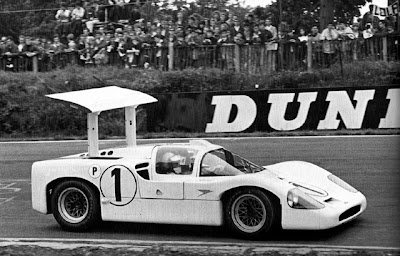 CHAPARRAL 2F - RACING AT BRANDS HATCH - WHAT A BEAUTIFUL MACHINE! 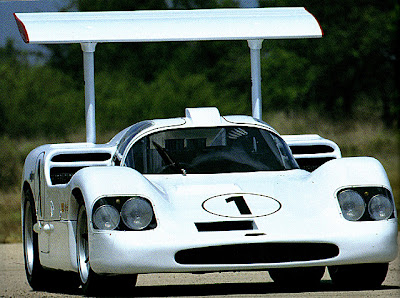 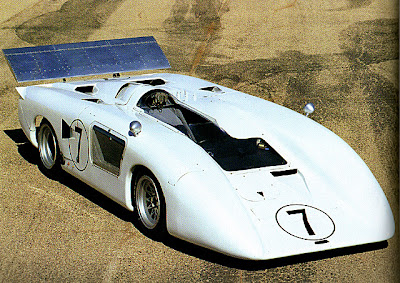 CHAPARRAL 2H - LEAST SUCCESSFUL OF ALL THE CARS, BUT BRISTLING WITH INNOVATION - FIRST CAR BUILT IN THE FORM OF AN INVERTED WING 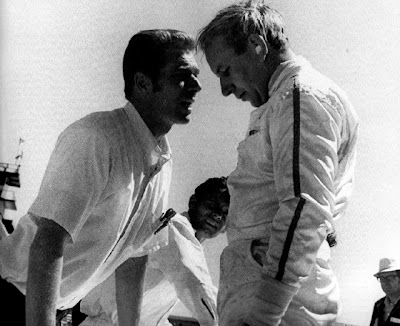 AFTER HALL'S ACCIDENT WHICH NEARLY PROVED FATAL, HE HIRED WORLD CHAMPION JOHN SURTEES TO DEVELOP AND DRIVE THE 2H - TO SAY THEY DID NOT HIT IT OFF WOULD BE AN UNDERSTATEMENT! 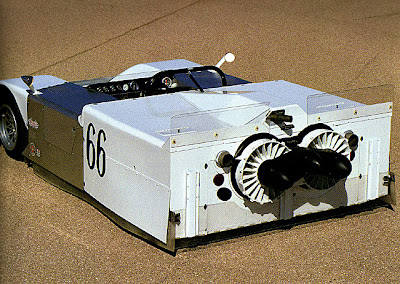 AS UGLY A CAR AS EVER RACED, BUT FOR SPEED IT WAS IN A LEAGUE OF ITS OWN. IT WAS SO GOOD, THE ONLY WAY THEY COULD BEAT IT WAS TO BAN IT.

I think getting Ghosts good information ผีดุ on the site is a great benefit to be able to continue.

We want to be a member of your sbobet thai website. what I have to do