ANOTHER ONE BITES THE DUST

The last words I wrote on this blog were back in May 2010, when I waxed somewhat lyrically about the declared intent of our new Co-leaders Cameron and Clegg to clear out a lot of the pervasive anti-individual legislation that our newly defeated New Labour leaders had put in place.

For reasons which partially elude me, I then stopped publishing my witterings. Part of it was the seeming lack of effect or even interest they had on the Cyberpublic. Another part of it was the fact that I often felt the need to head off towards Charlie Brooker-land, but always felt constrained that such a stream of vitriol would end up turning round and embarrassing me. So, being the sort of person I am, I simply withdrew.

I carried on writing, but in the form of a personal diary to which only I have the password. This has kept my literary aspirations ticking over for the last 6 months. Anyone who spends a modicum of their waking hours pondering the ways of the world, alternatively shaking their head in disbelief, bursting into uncontrollable laughter, or just going down the Victor Meldrew “I don’t believe it” road, will have found a continuing vein of news items which either excite, depress, frighten, amaze or just confuse one. Such a diary at least allows the feelings and thoughts, good and bad, funny and serious to be made sense of, at least as far as my own simple mind is concerned. Sitting down in front of a blank computer screen and forcing oneself to articulate and put down one’s thought in something approaching a logical format is something I find satisfies a personal need.

I started the original blog about 3½ years ago with a piece about Syd Barrett, the original lead singer of Pink Floyd – a man who had just died, forgotten, and as far as I can see, quite alone. Something in me pushed me to write down my thoughts about him, rather than just let them roll past in my mind to be overwritten the next day by tomorrow’s headlines. 342 pieces later I took a breather.

I am now a couple of weeks away from my 65th Birthday, and while reaching such an age clearly results in a heady amalgam of wisdom, sagacity, experience, knowledge and possibly (probably in my case) arrogance, it does also give birth to other, less pleasurable, situations.

People of one’s own age, people who have had major impacts on one’s life whether it be in a work context, or other, more relaxing arenas, start to die.

A couple of weeks ago, in the words of Freddy Mercury, “Another one bit the Dust”. It was another of the musical keystones of my life – Gerry Rafferty. You may not recognise his name, but if you listen to the radio, you will certainly have heard some of the songs he wrote.

The sax intro to “Baker Street” is simply one of the best intros to a Pop song EVER. The only other ones which get into my personal play-off are Marvin Gaye’s “I Heard it on the Grapevine”, and the Rolling Stones’ “Little Red Rooster”.

Gerry Rafferty’s life started in Paisley, and not, one suspects, at the posh end of town. His father was an alcoholic Irishman who died when Rafferty was 16. He started singing folky type songs and ended up in a a duo called The Humblebums, the other member of which was one, Billy Connolly. When this folded, it was followed by a Group called Stealers Wheel (“Stuck in the Middle”- Reservoir Dogs). This only lasted a few years after which he went his own way. One suspects he was not the easiest man to deal with.

To me though, the next few years of his musical life are part of my growing up. Three albums he made, “City to City”, “Night Owl” and “Snakes and Ladders” are simply some of the best albums ever made. They are not records to be blasted out at parties or fired off at crowds of 100,000 screaming fans at Wembley. They are introspective, intimate, listen in the car on your own type songs where he seems to be regretting being away from Scotland, feeling the loss of privacy and the lack of control which being a million selling songwriter and singer inevitably brings. The words he wrote are intelligent, thoughtful and beautifully crafted – very evocative and a long, long way away from the average 3 minute pop song lyric. 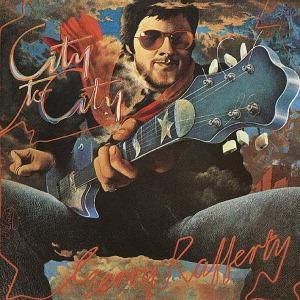 THE COVER OF "CITY TO CITY" DRAWN BY JOHN BYRNE

I have always thought that “Baker Street” is the best song ever not to have reached No. 1 in the UK. And it has always struck me as almost the ultimate irony that, a matchless 6 minute song about the disillusion and falseness of being famous, resulted in him becoming a major player in the music firmament just when he seems to want exactly the opposite.

Listen to his songs and the number of them that have him wistfully and rather introspectively reflecting on a simple life back in his homeland is quite amazing. It’s difficult to understand how he ever got to the position to write and record so many pieces in the first place when he seems to have been such a private, inward looking individual. He almost never toured in an attempt to sell his wares, with the inevitable result that he slowly faded from view. Apart, that is, from the ever dwindling Faithfull (count me in here), who carried on buying his latest record, and found them less and less good.

The demon drink then took him, and the rest is a rather sad and depressing fade into self induced obscurity. Those of us who Googled him every few weeks saw reports of trashed hotel rooms, Reggie Perrin-like disappearances and bizarre spats on the Internet with his brother. The report of his final demise in a hospital in Bournemouth as a result of liver failure came as no surprise to me at all.

But, as always with such people, their music lives on. He sang on the soundtrack to “Local Hero” with Mark Knopfler, and part produced the excellent “Letter from America” by the Proclaimers, as well as writing some very special, tuneful and moving songs. I wouldn’t be surprised that he died thinking himself to be a failure, but in my eyes, he has been a significant part of the music which makes me what I am.