West Indies are playing Sri Lanka at Cricket today in a One Day International in Trinidad. This picture of Jerome Taylor, the West Indies fast Bowler reminded me of Spike Milligan’s introduction in The Last Goon Show of All as "Spike Milligna, the well-known typing error". 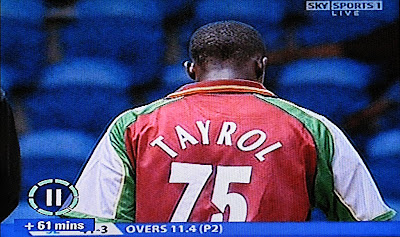 THE CRICKETER AS ANAGRAM

For the life of me, I can’t think why.

40 years ago today, Jim Clark, the best racing driver I have ever seen, was killed.

I've written about him before on this blog, but this day needs my attempt at a tribute.

Was he the best? The truthful answer is – you decide. It is simply impossible to judge the best from one era against the best from another era. Especially in such an arena as Motor Racing, where the changes in technology make such utterly different demands on those who drive the cars. Jackie Stewart, himself a three times World Champion, and one who I suspect believes himself to have been a better driver than he is usually given credit for, sums it up by saying that all you can do is beat those around you when you're involved. And of course he's right. But, it's also the WAY you do it, sometimes quite a mercurial attribute, which puts some champions above the others. But when it's there, it is most definitely there.

In the Sixties, racing a Formula 1 car was a fearsomely dangerous activity. That's not, in any way, to demean those who do it today, but the cars then had minimal safety protection, they were not built with anything like the technical know-how used today, the drivers wore precious little to help them in the event of a crash, there were at best next to no, and at worst no safety services at the races, and the circuits went almost totally unprotected. A run-off area was just as likely to be a forest as a brick wall.

If you had an accident, it was likely to be a big one. Innes Ireland, ex fighter pilot and Lotus driver before Jim Clark, writes very eloquently when he says he left his hotel room on the morning of a race, and looked around, not knowing if he would see it again.

That pressure alone places a totally different mental demand on the driver, and yet they still queued up to do it. The picture below sums it up. Taken at Spa in Belgium, a long, sweeping, fast and dangerous circuit which swooped through the Ardennes forest, the strain of racing shows in his face. The first time he raced there, his team-mate, Alan Stacey, was killed as was another driver, Chris Bristow. Clark came to hate the place yet he still won it four times in succession. That’s courage, as well as supreme skill. 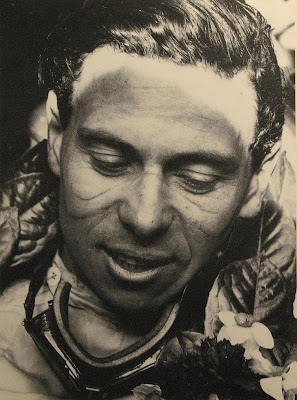 THE STRAIN OF IT ALL
Denis Jenkinson, the best Motor Racing journalist ever, had his own typical forthright view. “Forget the World Championship, just give it to the man who wins at Spa”.

There is an argument that the whole Formula 1 game was not as competitive as it is today, and it's probably true. The rules governing the car's design allowed the shaft of engineering genius to shine through far more than today. But, at the top, the competitiveness was there, be in no doubt. It's just that there were probably 20 people in a racing team rather than the 200+ today. Today it's Toyota, Renault, Mercedes, BMW, Honda, Fiat – then all the teams survived on their racing wits, with no "Big Manufacturer" standing behind them as a safety net.

An elder statesman of the Motor Racing Journalist group has just thrown his hat in the ring and put the cat among the pigeons by writing a book called "Alan Henry's Top 100 Formula 1 Drivers". He has been present at around 600 of the 700 Grand Prix races ever held, and his rankings make excellent reading.

I can't recall a book on the subject which has got the Motor Racing Blogging fraternity jibbering and foaming at the mouth so much as this list, which after all is just an experienced journalist's view, after a lifetime of watching races. He's not right, just sharing his thoughts with us all.

To him, it is not just points scored which secure your place. Otherwise it would be M Schumacher way ahead of everyone else. His view is much wider – the individual, how he acts, how he drives, the cars he drives, and a much more subtle range of almost emotional issues come into play.

He placed Jim Clark as No. 2 on his all-time list, with Stirling Moss at No.1. I imagine Moss got the nod because Henry thought Clark more often had the best car in the field, whereas Moss indubitably did not. I don’t agree with his order, but so what?

Just to get the statistics on the table, once he had won his first Grand Prix, Clark took part in 56 more Grand Prix races. Reliability then was much more of a lottery than now, and of those 56, he retired from 19, leaving 37 races which he finished. Of those 37, he won 25. That’s 2 out of every 3. He came 2nd only once. For a lot of the time, his team-mate was not a Schumacher style “Rear Gunner” – it was Graham Hill, himself a World Champion. I can’t actually be bothered to check out the whole of Grand Prix History, because I can’t think of anyone with a record remotely like that.

Clark was a strange man. He was born into Scottish Borders farming, and although he undoubtedly changed as his Motor racing life took him over, you felt he never lost sight of this background – as far removed from a Grand Prix driver as you could imagine. He seemed to be an introverted, manically nail chewing, almost reticent individual out of a car. Inside one, he was hard, disciplined, sensitive, the smoothest of the smooth drivers, and supremely fast.

He was a Pole Position specialist, and his racing style was simply to blast away at the start, immediately get a dominant lead, and leave the remainder of the field to fight for Second place.

The sixties were also times when there was no such thing as a Grand Prix Driver. They drove everything. Clark raced large American saloons, Formula 2 cars, Indianapolis Speeedway, Sports Racing cars, Le Mans, “David and Goliath” Lotus Cortinas (see below for a picture which shows what that involved!), as well as taking part in the 1966 RAC Rally. 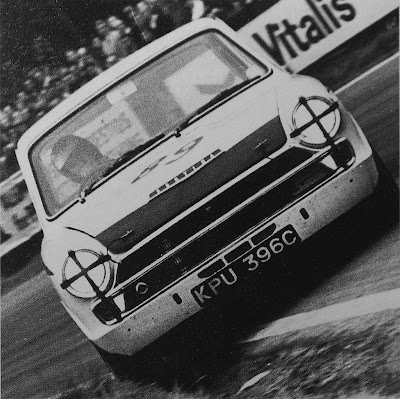 NOW THIS IS RACING! - CLARK IN A LOTUS-CORTINA

It was this dichotomy between the type of man he was off the race track, and the man whose driving defined the racing era he lived it which has been the source of so much fascination. Most of his peers put him in a different class from the rest, and they should know.

Chris Amon (No 13 on Alan Henry’s list), summed up what Clark’s loss meant - "If this can happen to Jimmy, what chance do the rest of us have? I think we all felt that. It seemed like we'd lost our leader."

WELL ANYWAY, IT AMUSED ME No 22

So there I am watching India play South Africa at cricket. The commentators are Graham Thorpe, an Englishman, and Kepler Vessels, a South African – both great players in their prime. It’s fair to say we’re watching India get comprehensively destroyed, as they try to recover from an amazing brainstorm where they’d managed to amass 76 runs in their first innings, with South Africa declaring their own first innings closed on 494 for 7.

In the middle of the play, we see four men, an umpire and three players kneeling on the ground peering at the turf. We can’t see what they’re looking at, but it is obviously attracting their full attention.

Graham Thorpe (Snorting, I was going to say, but am not going for the cheap laugh here – Cricket is serious stuff) – “It’s not a pig!”

Now we’re getting a grandstand view of the scene of the crime with a close-up of the four guys kneeling on the ground. Trust me, a pig was nowhere to be seen. I know what pigs look like.

So, the four men confer, and somebody shouts to one of the ground-staff to bring something onto the pitch. An Indian guy duly runs on with some tools, bends down, and attacks the ground, extracting something which had been holding the covers down on the previous day when it had rained.