One of the great pleasures in my life is watching International Test Cricket. It raises passions, draws exceptional performances from those who play and, over a five day period, the ebbs and flows, ins and outs and the highs and lows of the game can result in a sporting experience unmatched in any other game. Even the current fetish with Twenty-Twenty and One Day Games, whilst they can be hugely exciting, can’t bring out the chess-like thrusts and parries which only a five day game can generate.

The number of national teams in the World which can compete at the highest level does not reach anywhere near double figures. As I write, the two best teams on the Planet, India and Australia, are locking horns in the second of a 4 match series in the sub-continent, so the TV is getting a fair amount of use. 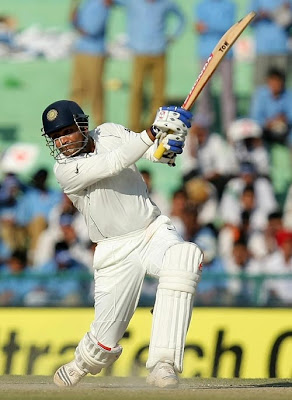 MY FAVOURITE BATSMAN, VIRENDER SEHWAG IN ACTION
It is not easy to identify many things in life where Australia lead the world, but sport in general is one where they have punched way above their weight for many years. Swimming, Athletics, Tennis and Golf come immediately to mind, but in the field of Cricket, they have been the World No. 1 team on average for the good part of 70 years. Yes, there have been times when England and the West Indies particularly, have had the upper hand, but it doesn’t seem to last for too long. 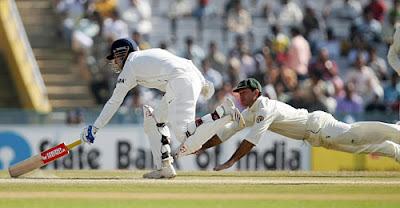 PONTING TRYING AND FAILING TO RUN SEHWAG OUT
For the last 15 years or so however, they have been THE team to beat – except that almost no-one has managed to do it. England managed it in 2005, but only just. They’ve almost come to expect winning and domination as their right. But, over the last year, we’ve seen the major stars in a blindingly good Australian side depart the stage. Gilchrist, Gillespie, Warne and McGrath were all the best in the world at what they did, and they’ve all gone. Today, Hayden is on the wane, Ponting has had his share of injuries, and, all of a sudden, to me they look vulnerable, rather than dominating and all conquering.

India, as well, have been in a state of change. Many of their great stars are reaching the end of their careers, and they have started a wholesale “move to youth”. In the next year or two, we will see the end of great players like Kumble, Tendulkar, Gambir and Dravid, and time will herald a new order of Indian players. You can see it already with people like Mahendra Singh Dhoni, Ishant Sharma, Amit Mishra and the like who are well on the way to replacing these elder statesmen.

There must be something rather reprehensible in me where I get more pleasure than I should by seeing Australia under the cosh. In this match, they were not just beaten, they were utterly outplayed in every department of the game, with India registering their most emphatic Test win ever. I mean you just don't beat Australia by 320 runs.

But for once, the Aussies took it on the chin. Ponting recognised they had been thrashed and set out to move on, Be in no doubt, they’ll be back, but with no spinners in the team whom the captain trusts with the ball, Hayden playing most bizarrely, Brett Lee for once looking very ordinary, Ponting getting in all manner of difficulties facing Sharma, and only Clarke and Johnson showing any resistance in the Australian’s second innings, you wonder what’s going to happen to turn it all around for them in the next seven days.

It does beg the question as to whether we’re seeing the sunset performances of the Aussies for a couple of years. If you were Kevin Pietersen, you might be thinking that the stars are lining up in just about the right alignment for next year’s Ashes contest in England.