Occasionally, very occasionally, a new car is produced which takes your breath away. Not necessarily because of its beauty, or its performance, but because it is so different from anything which has ever gone before.

This happens so infrequently because many important things need to occur at the same time for this particular egg to produce a chicken. Developing a new car is a fearsomely expensive proposition – many hundreds of millions of pounds, so whoever’s going to do it needs an awful lot of cash. Some one needs a real vision, something that most of us say can’t be done. And that person with the vision needs to have the power to commit the enormous funds to a project which most of the people around him probably think will not work.

Committees and concensus, which is the way of most of the World’s Motor Companies simply don’t understand that approach at all – all they want is Safe and Secure. But just occasionally, thank Goodness, the genius overwhelms the mundane.

Sometimes what comes out of this is outrageously expensive. The Bugatti Veyron, produced at a rumoured development cost of £400 million, and with a planned production of around 300 units is one such. It was made because the boss of VW, one Ferdinand Piech, wanted to make it, at any cost, just to say he could. The loss on each car, which they sold for almost £1million each is suggested to be two or three times that figure. But the man wanted to do it, was in a position to do it, had no work colleagues who could tell him not to be so silly, and keep their jobs, so he did it. Simple as that.

I suppose you could account for that one as a rather large Marketing Investment for VW. Or the most expensive Auto-ego trip in the History of the World.

But more often, the vehicles which fall into this category are at the other end of the scale. Two or three come to mind. The original Beetle, sired by Ferdinand Porsche (interestingly Ferdinand Piech's Grandfather - there must be a story there), the Citroen 2CV sired by Pierre-Jules Boulanger and the BMC Mini, designed by Alec Issigonis. All were one person and one person alone’s view of starting with a very large, very clean sheet of paper. They all must have written down a simple design Brief, and thought logically and ruthlessly about how best they could achieve the Brief, ignoring totally the frettings of jobsworths Marketing proles adn whisperings of all their design mates saying “We tried that and it didn’t work” or “You can’t do that.”

This piece is really leading up to a few thoughts about a new car which is just on the market, but I’m going to scribble away for a while on one of the three pieces of engineering genius mentioned above to set the scene for today’s market entry, to show that nothing is ever new – it just gets reinvented if the times are right.

So, of the three, I’ll pick the Citroen 2CV, just because we used to have one in the family. Just look at it. 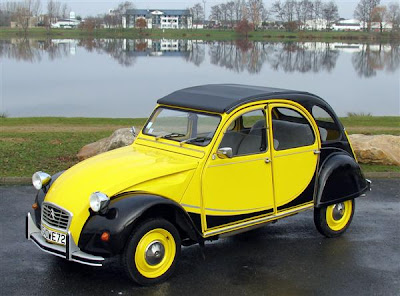 NOW ISN'T THAT PRETTY?
Its Design Brief is quite famous, and today’s Chief Engineers’ minds would boggle at it. It said, apparently –

… a low-priced, rugged "umbrella on four wheels" that would enable two peasants to drive 100 kg (220 lb) of farm goods to market at 60 km/h (37 mph), in clogs and across muddy unpaved roads if necessary. (France at that time had a very large rural population, who had not yet adopted the automobile, due to its cost – note this bit for later!) The car would use no more than 3 litres of petrol to travel 100 km (78mpg). Most famously, it would be able to drive across a ploughed field without breaking the eggs it was carrying. Boulanger (the man in charge) later also had the roof raised to allow him to drive while wearing a hat.

What he ended up with was a piece of genius, minimalist engineering that ran for over 40 years until the Nineties. Nothing was sacred to him in his aim to bring motoring to a whole new range of people. Compared to what had gone before, it was a breathtaking piece of audacious belief in the need to do things totally differently. And succeeding.

It had front and rear interconnected all wheel suspension (to make it ride like a Rolls Royce), inboard front brakes (same reason), an aircooled 2 cylinder engine (to save cost), bolt on wings front and rear (to save cost and make it easy to repair – have you ever driven in France?), detachable, hingeless doors (to save cost), flap up windows (to save the cost of the winder mechanism), and a full length fabric sunroof. It looked like an upturned pram and handled like an unruly yacht in a high wind.

To save cost, there were no anti-roll bars on the suspension. But the ride was excellent – it floated over the roads quite brilliantly – the eggs did not get broken. It had an utterly unique gear change pattern, which looked really odd until you thought about it and tried it. At which point, you realised that everyone else, before and after, had got it wrong. To save cost, the windscreen wipers had no separate motor – they were powered via a cable from the engine. The faster you went, the faster they went. Simple.

To save cost, it had no radiator, no coolant, no water pump and no thermostat. It had no distributor and no hydraulics. Because the cooling fan and the dynamo were integral parts of the crankshaft, no drive belts were needed to power them. His philosophy must have been - If you can do without a particular component, then leave it out. If it’s not there, it can’t go wrong.

On the one we had, the air conditioning was provided by a forward facing flap which you opened (manually) from the top of the dashboard, allowing the wind to pass into the car. The de-luxe models had a wire mesh grille in the aperture to stop (most of) the bugs and creepy crawlies which would otherwise breathe their last as they flew up your nose at 60 mph. If you wanted to go on a picnic in ours, you stopped at your chosen site, opened the back door, or slid it off its hinge, and took out the back seat, whereupon you immediately had a picnic bench. I’ve tried that with my expensive Audi, and you can forget it.

The thread which runs through all this from a design viewpoint is not “Make it Cheap” which makes it unreliable, but “Let’s not have it at all”, or if we can’t do that, let’s design it to be as utterly simple as possible, whilst staying within the Design Brief. I’ll bet a copy of that Brief was on every Citroen Engineer’s wall, and if they finished the day and what they’d done didn’t match it, they binned it all and started again tomorrow.

So you end up with a very minimalist car, which looked like a joke, but ran like a train, and did exactly what it was supposed to do. There was next to nothing to go wrong, and the bits it did have, ran for ever because they were so simple. It was immense fun to drive, cornering on its door-handles, but it could keep up in the bends with much more esoteric machinery. It phutted its 2 cylinder, 33 horsepower way along today’s motorways at 70 mph, although it has to be admitted that it did take an awful length of time to get there.

So you just developed a different driving style in which, momentum having been gained over a few minutes of gentle, but flat out acceleration, ensured that it was never lost. Corners were taken as if you were competing in the Americas Cup, and the idea of ever braking was pushed to the bottom of the list of possible solutions to any given driving situation. You even took note of the wind strength and direction when starting a long run – it would affect quite considerably how long the journey would take.

The only thing it was bad at was having an accident. The steel shell was paper thin, and that was before the rust set in to make it even thinner. It weighed 560 kilogrammes, about a third of an equivalent car today. I dread to think what the seatbelts were mounted onto. The thought of an airbag in this thing was the cause for hysterical laughter. You simply had to hope that you kept away from everyone else at any sensible speed. Which of course made you do exactly that.

But they made around 5 million of them over a period of 42 years, and changed the way of low cost motoring for the masses. The eccentric, but very astute motoring journalist, LJK Setright, called it “the most intelligent application of minimalism ever to succeed as a car.” And he knew what he was talking about.

Part 2 of this piece looks at today’s take on roughly the same design brief.

Interesting. They were never brought to this continent, of course, so I've never seen one up close. The closest NA comparison would be the 1960's Beetle.

Brilliant post! I grew up with 2CV's, was brought home from the hospital in one, and they havent left the family since. :) Just got back home from the meeting in Most, which was a blast. Great to see other 2CV fans out there!

Russell G said...
This comment has been removed by the author.
11:50 am

Great post. Can't agree with the lack of anti-roll bars, as LJKS himself said, they are an admission of defeat. On poorer roads, a good 2CV will corner harder than many modern cars.

Also, the lack of strength you refer to is a common misconception - any car which will drive across unmade roads at top speed without any structural damage (unlike, say, a Land Rover) can't be so flimsy. I have been surprised by the huge amount of protection the cars afforded their occupants in at least two enormous accidents, the passenger cell remaining in tact with the doors all opening. Appearances can be deceptive!

A few years ago a light aircraft knocked some cars off a motorway bridge. Those in a 2CV (four people!) were the only ones to survive with minor cuts and bruises.