CHESS IS A FUNNY GAME

25 years ago, the world watched for something like 5 months as two Russians played innumerable chess games until they’d both got frazzled and worn out. Kasparov and Karpov – one the old, solid player, and the other a young fleet footed (in chess terms) pretender.

In so far as chess ever took centre stage in the world, this must have been its Finest Hour. I almost became enthralled with what was going on.

<
The passion soon went away for me and the only other time the flame has ever really reflickered since then is when, in 1997, IBM built a computer called “Deep Blue” to play Garry Kasparov. Rather surprisingly, the PC Blue beat Kasparov 2-1 in a Six match series.

I don’t suppose I’ve thought anymore about Chess until this morning when I read that the two Russians are starting a rematch. Given the way the world has changed over the last quarter century, it's not surprising that the format of the current duel is very different. The contest now is 12 matches only - four semi-rapid and eight rapid games — over one week. I have to say that I’d never even heard of these Chess equivalents of Cricket’s Fifty Over One Day International or 20-20 style of game. But the way it works is a semi-rapid game last 25 minutes, with five seconds for each move, while a rapid games runs for only five minutes, with two seconds for moves. It seems a million miles from Chess as they played it in 1984, but life moves on, and even Chess players today are blessed with a reduced attention span.

Now, fast forward, with a bit of a jerk, to the subject of cartoons. I have said before that, on balance, Cartoonists seem to me to be the sanest class of people on the planet, and that a Government fronted by them would probably run the world more effectively than the mob we've got now. I suspect the cartoonists vent their prejudice and anger on the blank piece of paper which becomes tomorrow’s bit of humour in the newspapers, and this results in a clearer mind afterwards.
As soon as I remembered the Man vs machine Chess game of Kasparov vs the IBM PC, a picture came into my mind of a cartoon I saw at the time. It was in the Daily Telegraph by that genius of the genre – Matt.

This man consistently produces the best cartoons I know. Always understated, he bases them on seemingly gentle drawings of a middle class, rather grumpy and somewhat down-trodden and weary English couple facing the absurdities of life in a semi-resigned way. Except he hits the absolute bulls-eye in a situation, or a combination of concurrent but different issues, in a way that amazes me. He never seems to have a off day - always On the Money. So I started to look around for this one from about 12 years ago. It has stuck in mind over all that time.
Good, isn't it? 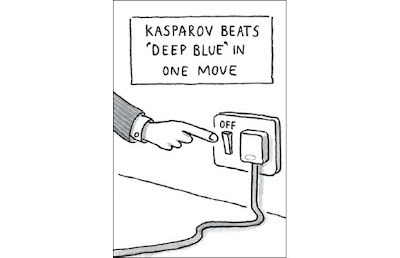 Even on the "easy" setting- Vista's Chess Titans beats me consistently. ;-(

People of all ages enjoy playing online games because they like the idea of engaging in new virtual environments with other people around the country or around the world.