There’s a scary rumour around that the “Lion Bar” is no more.

Without in any way admitting to being hooked on the stuff, I can seriously understand why the “Bar of Chocolate” is probably quite high up on the List of “A” Class Addictive Substances List, if Our Leaders, in their unceasing quest to measure and control Our Lives Totally, ever thought about creating such a thing. And the position of the Lion Bar in this List would be somewhere at the very top, espescially the King Size Version. I have only eaten one of those Monsters once, and I was not mentally strong enough at the time to dare to read the contents label, as I suspect I would have collapsed at the Levels of Calories, Fat, etc etc etc I had just consumed.

But, in reality, that’s the whole point about them, isn’t it? It’s called Comfort Food for goodness sake, and that’s precisely what it is. When it’s what you want, the idea of nibbling a Raw Brussel Sprout, or a Mung Bean and Tofu Surprise isn’t even on the board. And, in this author’s very humble opinion, The Lion Bar is King – or is it more of a case of “The King is Dead, Long live the Raspberry, Granola and Oat Krunchie?”

Checking on Nestle’s web site leads us nowhere. There’s a very carefully, mealy mouthily worded comment about the Lion Bar on their List of Products. Each of their many products has a “Come on, Eat Me” picture alongside the description, but the Lion Bar’s section sits there pictureless, and the caption simply and forlornly reads –

Lion bars were launched in 1976 and are aimed primarily at young men aged 16-24.

Which in itself is a bit of a bummer – I’m not sure I like to be associated with a target market of “young men aged 16-24” – the way they write it doesn’t sound over complimentary to me. But the main issue is they get you well and truly addicted over what is essentially the whole of your Chocolate eating life, and then – Pouf! Because some Swiss Business Analyst wielding a chocolate spreadsheet decides he doesn’t like the numbers, it doesn’t exist any more.

I can’t help thinking that this sort of thing ought to governed by the same sort of restrictions that prevent great works of Art from going abroad. You can see it today with Turner’s Blue Rigi where, because it’s such an important item, there is a concerted plan to save it for the nation. (Just so you don’t think I’m completely barking, here’s a picture of this intensely beautiful painting.) 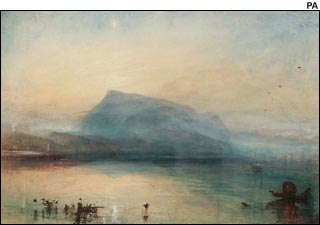 There is a mandatory stay of execution on its export while enough support, be it monetary or political, is raised to keep the thing in the UK, and so it should be. But where’s the campaign for the Lion Bar, which probably touches more people than Turner’s masterpiece? There's an argument that if you partake or are involved with something over such a long period of time, you almost begin to own a bit of it, so you should have some sort of say when a major decision about stopping its availability.

And just in case you don’t believe just how many people are so chocaholically fixated, a couple of keystrokes on a computer transports you "Lion (Bar), Witch and Wardrobe"-ly, into a totally parallel universe. Just look at the following link and be amazed - http://snackspot.org.uk/thread.php?story=0412201849sbc . In it you will find streams of learned discussions on such things as the existence of 22 different flavours of Kit Kat, including swelpme, Christmas Pudding and Green Tea (not in the same bar I hasten to add) flavours. There’s even a taste test on some of them which probably explains why they're not on sale in the UK –

There's a faint smell of sick you get from white chocolate sometimes. The Lemon Cheesecake KK flavour's sickwhiff was quite pronounced, but they were still edible if not brilliant.

The Green Tea variety absolutely reek of it, with a worrying and inexplicable subpong of melting plastic too. It certainly doesn't smell anything like any green tea I've ever drunk... can't comment on the flavour as I never made it that far. (Yeah, I'm a wimp.)

Still, the Japanese people in the room were not put off by the stench, so they didn't go to waste. Though it took a good ten minutes for the objectionable odour to waft away.

But, back to the main subject. If you want the Lion Bar, with its ultimate combination of Chocolate, Biscuits, Rice Krispies, Milk, Toffee – if you eat cereals in the morning, it’s a bit like a Chocolate All Day Breakfast – to be with us, for your children, and your children’s children, you may want to write in the strongest “Outraged of Tunbridge-Wells” tones to Nestle NOW.

Tomorrow may be too late.