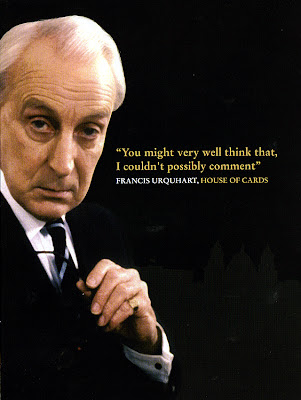 How very sad to read of Ian Richardson’s death yesterday.

Most of us, of non-Shakesperian stock, knew him through his acting on Television and in films, and it’s only when you read his “credits” that you realise the sheer volume of his work. He almost had two careers, firstly as a leading Shakesperian actor with the RSC until 1975, and latterly, following a nervous breakdown, as a hugely distinctive actor on TV and film. Think of the raft of “good” series on TV, and Richardson seemed to have been in most of them - Tinker, Tailor, Soldier, Spy, Porterhouse Blue, Blunt (was ever a man better suited to a character?), Gormenghast and Bleak House to name but a few.

But his portrayal of the monstrous Francis Urquhart in the masterly "House of Cards" Trilogy is the one part of his which will stay in my mind for ever. Strangely, having very recently got a bit sick of the current Government dancing around their individual handbags over the “Cash for Questions” affair, I played “House of Cards” again. Once you start watching, you can’t stop – it’s riveting stuff, even 15 years on. It loses none of its sinister blackness, and Richardson’s cold, dark, precise and deliberate playing of Urquhart gives you a real sense of the creeps, and makes you believe that the things that went on in the three series could actually happen.

Of course, in the cold light of day, the idea of the Prime Minister throwing one of his advisors/mistresses off the parapet of the Palace of Westminster does strike one as a tad improbable. But, I’ll bet there are a lot of High-Up politicians over the last 15 years whose personal video copy of that sequence has worn a bit thin through overzealous use of the pause button. You can just imagine them thinking – “I just wonder…..”.
Posted by rogerc at 5:35 pm

The best television of recent time. Far outpacing any programs, except competing very strongly with "Breaking Bad." BBC accomplished much with this program and the writing of the scripts was far above excellent. Wished it could have been an on-going drama over the many years beyond its three-part segments 1990-1996. I do miss Ian Richardson. His death was sudden and unexpected. A major loss to his art.