Graph A below is copied from the front page of the “Daily Telegraph” today. In the fight for “Broadsheet Supremacy”, this is the Telegraph’s poke in the eye to “The Times”, and the graph shows a massive lead for the Telegraph over the Times. It says “Over the past two years, The Daily Telegraph has increased its lead over the Times from 198,175 copies in October 2005 to 236,491 copies in September this year.” 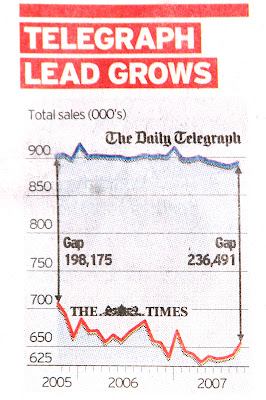 Well, that seems quite clear.

Graph B below is copied from the front page of the “The Times” yesterday, and the graph shows a (not quite so) massive lead for the Times over the Telegraph. In the fight for “Broadsheet Supremacy”, this is the Times’ poke in the eye to the Telegraph. It says “Full rate sales of the Times were ahead of the Daily Telegraph for the 35th consecutive month …”. 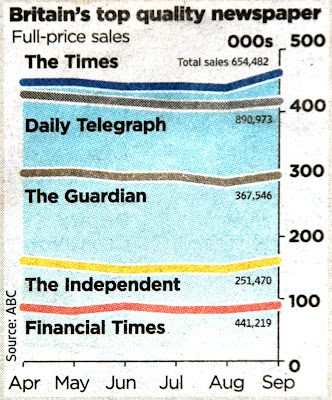 GRAPH B
Well, that also seems quite clear.

I feel like writing to, say, "The Guardian", as the current, Independent (!) third place highest seller in the Broadsheet circulation battle, to ask them, as an interested and also hopefully a disinterested bystander, if they can help throw any light on all this, and possibly explain it to me.

Something tells me though, that it would all be a waste of time, because they’d have another graph which proved that the Guardian was the best seller of all.
Tags:
the times,
daily telegraph,
statistics,telegraph
Posted by rogerc at 11:17 pm