HANGING ON IN QUIET DESPERATION IS THE ENGLISH WAY ...

I wonder how many people of my generation, and probably the next one along as well, on reading the title of this piece, don’t immediately see, in their mind’s eye, a glass prism on a square, black background, refracting a light beam into the colours of the rainbow. Not that many I’d guess. 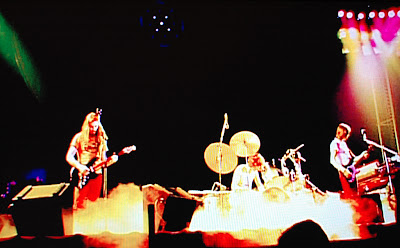 THE FLOYD IN ACTION c1970 I’ve lost track of the number of copies of “Dark Side of the Moon” that I’ve owned. I bought my first Vinyl 12” LP version early in the Seventies, and then because it kept getting scratched, that was replaced a few times. Then the CD version, which somehow disappeared (main suspects, although to this day unproven, still remain daughters). That was replaced, and a few months ago, that replacement “disappeared”. For most of 2007, I have been without a copy – until last night. For reasons I can’t explain even so soon after the event, I found myself in the CD Section of Tescos at approaching Midnight, and there facing me was a securitised copy of the famous prism at the princely price of £8. So, I have now rejoined as a fully paid up member of the Human race, with a copy of the CD in my car.

I’ve played it twice again in the last day, and am absolutely riveted by it. A few months off from hearing it has sharpened up my feelings about it, and I sat in the car, outside the gate of my house tonight, listening to the last couple of tracks and waiting for the closing heartbeat to fade into silence before rejoining the world.

Having pondered about it over my home made Pizza and obligatory glass of Sauvignon this evening, I’ve concluded that it’s simply the best Popular Album I’ve ever heard. No caveats. No Ifs and Buts.

Released in 1973, this was a record which, at a stroke, changed the face of modern pop music. This record was not about the specific story of an Eleanor Rigby, a Lady Jane or a Jumpin’ Jack Flash. It wasn’t about fancying the girl next door, Dreaming about California, being overconcerned about a Hound Dog, or being stuck Twenty Four Hours from Tulsa.

It was about the machinery of living today, the madness of everyday life and the pressures, worries and forces which mould it. It was about money, corporatism, greed, materialism and homelessness and the post juvenile disenchantment of facing these issues in the Seventies. It chewed over the place of the individual, both standing up for itself, standing out from other individuals, and also facing up to “them” – governments, and the myriad forces of the State. Over-riding the whole thing however, and stitching it all together is the idea of Lunacy and Madness.

In a nutshell, it was about the things which worry and concern all of us – when we look in a mirror, really look in a mirror, it’s about what we are. Not, you’d have thought, the most obvious and inviting subject matter for a Pop Music Album. This one however, has sold continuously for the last 35 years. After its release, it stayed, without a break, in the US Top 100 Album charts for a slightly insane 741 weeks (almost 15 years) and, since 1972, has featured there in total for more than 1500 weeks. I don’t think I actually know anyone who hasn’t had a copy at some time.

So why is that?

It’s both very complex, and exceedingly simple. The whole thing was the brainchild of one man, Roger Waters, who realised that, approaching 30, life was passing him by, and he needed to set down his thoughts about the facets of life which increasingly kept him awake at night. 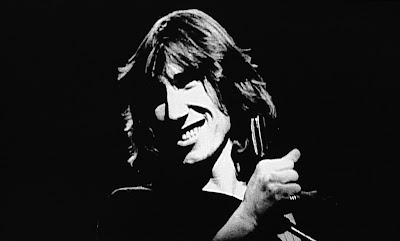 ROGER WATERS IN AROUND 1970 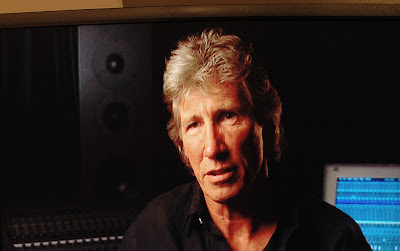 ROGER WATERS 35 YEARS LATER
The words he came up with to do this are in no way fanciful – they are almost snippets, simple soundbites even. But the imagery the words conjure up are hugely potent, sharp and straight to the point. Try this for size – reflecting on madness, and the slide of one of the Floyd’s original members, Syd Barrett into its dark world, Waters writes –

... You raise the blade,
You make the change,
You re-arrange me till I’m sane

You lock the door
And throw away the key
There’s someone in my head but it’s not me.

Each set of four words tells a bit of the story, moving the idea on. But, in my humble opinion, at the same time, very chilling and very effective.

I am not an anorak about these things, but I don’t recall any album before “Dark Side of the Moon” having anything like a similar structure. Prior to its release, albums were a collection of songs – (Yes, even Sergeant Pepper). The whole thing here is created as an almost seamless, homogenous whole. 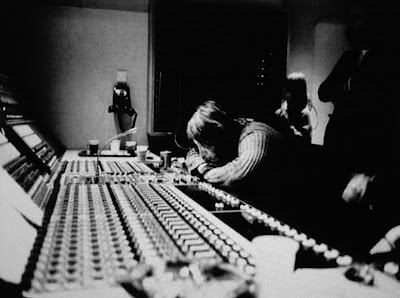 ROGER WATERS AT THE MIXING DESK
It starts with a simple heartbeat slowly increasing in volume – on first hearing you thought “What the hell is this about?” - and ends with the total reverse, the heartbeat fading away into nothing. Between these endpieces, there are nine sections, segued together quite brilliantly. Only in the middle of the work, where the original Vinyl LP ended Side 1, is there a hiccup. But, apart from that, one section slides effortlessly into the next – you can’t see the join, except when you realise that the ideas have moved on to another subject!

A new idea Roger Waters had was to use recordings of people around him reacting to a disarmingly simple but very leading set of questions he asked. He wanted to tease out their inner thoughts and prejudices, their opinions on things like violence and madness. He then overlayed these comments throughout the record. This gives a really dark and edgy side to the whole production, as the snippets do not always appear when you might expect them to - rather like the way our minds work, when we are suddenly hit by changes of subject in a random way we can’t control or understand.

All of that sounds a bit bleak, and, to be fair, it is a record which does not contain much optimism. You certainly don’t get DJs putting it on when they want to fill the dance floor at the wedding reception. It’s a very intimate and introspective thing actually, best listened to on one’s own, in a darkened room, with the sound up very high.

I suspect I’ve played this record more than any other I’ve ever owned. And, apart from all I’ve said above, the thing which keeps me coming back to it time and again, is that it’s an absolutely first rate collection of brilliant, memorable songs with great tunes. With David Gilmour’s soaring, and sometimes searing guitar, through the extraordinary wordless solo by Clare Torry on “The Great Gig in the Sky”, through Rick Wright’s hauntingly beautiful and introspective piano playing, there isn’t a weak link anywhere. In spite of Roger Water’s trying to “rubbish” it a bit now, calling it ”a bit Lower Sixth”, I think his overall vision was quite remarkable. 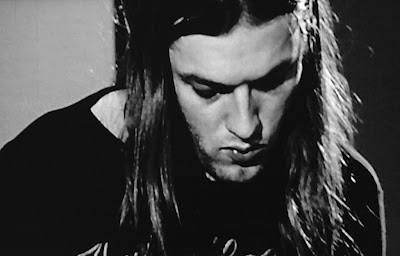 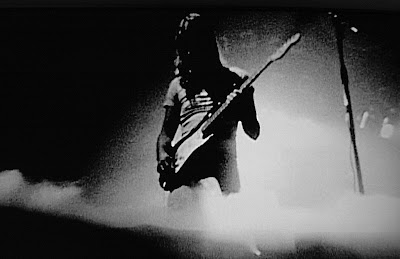 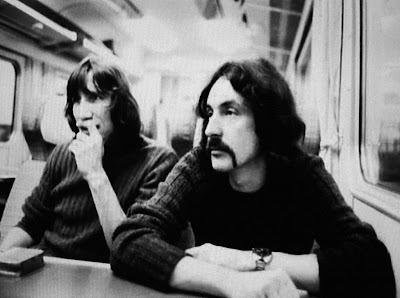 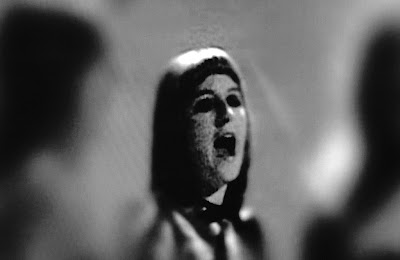 CLARE TORRY RECORDING "THE GREAT GIG IN THE SKY"
This bit will sound as if Melvyn Bragg has suddenly leant over my shoulder and started whispering in my ear, but I’ve been trying to think of a piece of art, created in my lifetime, which is more important, more significant and has had more effect on people in the Western World than “Dark Side of the Moon”, and actually I’m struggling.

I think it is an absolute masterpiece.

Hi Roger, Enjoyed your critique of Dark Side tremendously. It's an album that conjours up as many memories for me as it clearly does for you. It was the second "serious" album I ever possessed and provided the soundtrack for a good part of my formative years. At the risk of sounding like a complete old git, I feel a bit sorry for the kids of today. You can't imagine DJ whizzy wotsit or Puff Diddly - or whatever he's called - having quite the same staying power can you?

All the best BH