SORRY SEEMS TO BE THE HARDEST WORD

A small item from today’s “Times” newspaper, found lurking in the “This Week on the Web” column put together by Rhys Blakely. 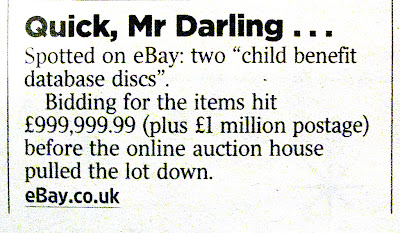 Pause for a slight smile, but then the whole sorry episode is a perfect definition of “Schadenfreude”, and that in itself always leaves you with a slight smile, even though it may be tinged with a touch of guilt. The unalloyed pleasure at watching that nice Mr Darling squirming as he tries to explain what’s gone on, is only surpassed by the joy at watching the excruciating contortions formed by Gordon Brown’s mouth as he vainly attempts the word “Sorry” for the first time in his life. Do we all realise who had the responsibility for HMRC for 10 years before he became Prime Minister? Just checking.

If, however, you want to put a real grin on your face, you should read a comment on a blog by a friend of mine, who for security reasons and avoidance of harassment from the Provisional Wing of the Government Audit Office, can only be identified by the codename X. If you look at his blog, which can be found on http://www.chris-linfoot.net/ (Don’t tell him, Pike), trawl back to 21st November – “Seen on e-bay, and a Government Warning”, and Enjoy.

He gets it in one.