ENGLAND v SRI LANKA - NOTHING TO SMILE ABOUT

One of the real pleasures of owning a Sky Box is to watch top class cricket all the year round. Recently, the rains have transformed my garden into a bit of a quagmire, and the damp, freezing weather has occasionally turned the usual pleasure of walking the dogs into a bit of a duty. Switching on to watch a game in the Southern hemisphere has been like flinging the central heating on and getting the sun to shine, on demand. The only frustrating bit of sand in the oyster, it has to be said, is that one of the teams playing was England.

Sri Lanka are a really good side, especially on their home ground, but then again, so are England supposed to be. Starting out rated second in the World, England were expected to give the Sri Lankans a good run for their money. The three match Test Series will go down in the history books as a 1-0 win for the home side. But the reality was, it was nowhere near as close as that. Apart from the first morning of the First Test, where England had Sri Lanka on their knees at 40 for 5, they were pretty comprehensively outplayed by the opposition for almost the rest of the series.

In all departments of the game, bowling, fielding, wicket keeping and batting, we deserved to go down 3-0, and only a series of timely interventions from the weather helped us keep the difference to one match.

You can trawl through the details but the simple facts are we do not have a truly world class batsman in the line-up. Cook was the best with a disastrous start in the First Test slowly being turned into a match saving hundred -the only one scored by anyone in the England side on the tour. Interestingly, only Tendulkar, Miandad, and a certain D Bradman, have scored more or as many Test Hundreds by the time they were 23 as Alistair Cook has. Just think how many good players are NOT on that very short list. He may not be the most attractive player to watch, but England really, really needs someone like him.

The rest of them dillied and dallied with Petersen being as dreadful as I can remember. Bell flattered to deceive, suffering from the new contagious English disease of not being able to turn a 50 into a 100 (once again, look at Cook’s record here – it’s in a completely different league). Bopara and Collingwood seemed to suffer a massive crisis of confidence, although Prior stepped up to the mark on occasions. Apart from Cook, the only English player whose batting you could say allowed him to hold his head up was Sidebottom, who played some terrifically gutsy and intelligent innings at No 7. The whole middle order seemed to be totally unsettled by Peterson’s continual failures, showing that building a batting side around one person, who then singularly fails to deliver the goods, can destroy a side’s confidence very quickly.

The fielding, in recent times a real England strong point, was simply average at best, and unacceptably poor for much of the time. Prior’s wicket keeping was shambolic and he let through far too many chances which should have been taken. It would be an interesting exercise to work out how many runs Sri Lankan batsmen went on to score, following a dropped catch by Prior. My guess is in the many hundreds – simply not good enough, and possibly match losing on occasions. If he’s the best we’ve got, we’ve got a real problem.

The bowlers toiled doggedly, with Hoggard in the First Test being outstanding. Quite how we managed to lose a match when we had them 40 for 5 before lunch on day 1 is quite beyond me, and them as well, I suspect. Anderson was very disappointing. Sidebottom bowled better than his figures show, and Broad had a baptism of fire. Harmison struggled to dominate, and where Malinga got some real bit on occasions, Harmison should have but didn’t. Panesar was far too expensive, but at least had three matches to see, at close quarters, just how Muralitharan does it all.

But none of all this takes away the pleasure of watching the Sri Lankans play. To my untutored mind, they play some of the most exciting cricket in the World today. Players like Sangakarra, Jayawardena, Jayasuriya, Vaas and Murali are all men who can turn matches on their own, as well as being an utter delight to watch. Just at the moment, England has none of these – at least I hope it’s only “just at the moment”.

On a completely different level, one small nugget of pleasure in the series was watching Bob Willis who did the summing-up role for Sky. Now Willis was a tremendous bowler in his time, but, as a TV Pundit, until recently he qualified as the honorary Scotsman in PG Wodehouse’s comment "It is never difficult to distinguish between a Scotsman with a grievance and a ray of sunshine.”

You never saw Willis smile. Someone in the Sky hierarchy however, has clearly noticed this and sent him on a Smiling Course recently, with devastating results. As he is introduced to the viewers now, he stares at you with this amazing face on, which one suspects is his early unfinished version of a genial smile. He looks as if he has unintentionally just sat down, quite hard, on the handle end of a cricket bat. Having got the smile out of the way, his face reverts to the grumpy, tetchy man we have grown to know and love. Come the end of his bit, the rictus smile is switched back on – talk about Jekyll and Hyde.

Somebody should tell him to wait until he’s finished the course.

If you don't believe me, the camera can't lie - pictures below. 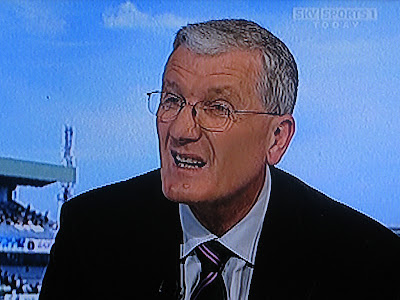 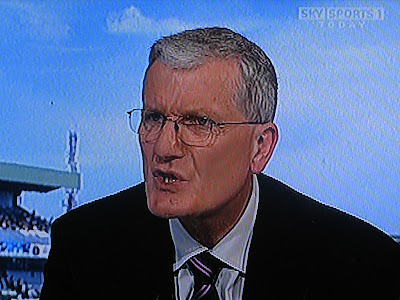 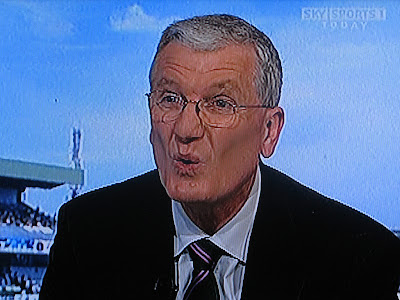 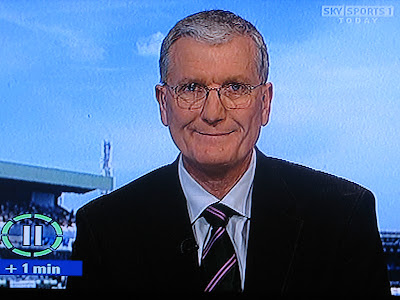 THE SMILE - WORK IN PROGRESS