IS NOTHING SACRED IN GOD'S HOUSE?

A couple of items ago on 3rd February, I wrote a short piece about York – specifically the Minster and Bettys, feeding (in no particular order) body and soul. A few pictures taken in both places, enlivened, or at least padded out the words.

Lo and behold, last Saturday’s Daily Telegraph (for those of you not in the UK, the Daily Telegraph is the UK’s premier national daily newspaper – unless you are the editor of the Times, in which case, it’s probably the Sun) had a picture which had me checking back to my own photographs. An almost identical image to mine, of the roof of the Chapter House (that’s in the Minster, not Bettys) appeared in the newspaper. 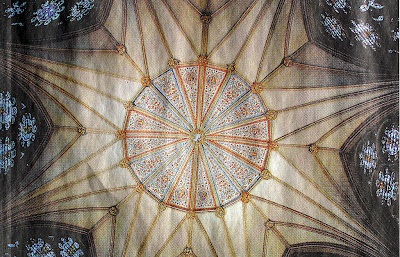 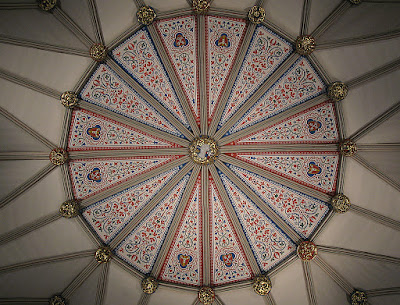 Now I took the image by lying flat out on the stone flags with my head at the centre of the circular floor looking vertically upwards. I must have looked, I suspect, very much like the leader of the provisional wing of some Druid Cult in the throes of a rather dark and mystical ceremony that could easily have been mistaken for some preliminary planning for Wicker Man II.

Some few days later, the bemused staff there must have been intrigued by another wierd-o doing exactly the same on the Chapter House floor.

I wonder what they think is going on.
I suspect security there now is a lot tighter.
Tags:
york,
york minster,
daily telegraph,telegraph,
chapter house
Posted by rogerc at 9:37 pm

I embarrass my wife all the time with my photo-taking. Such is the price of genius... ;-)