A SHOT IN THE DARK - NORFOLK FASHION

Up with the lark this morning. There’s something creepily virtuous about getting up on a Sunday in the dark when you don’t have to, and you could be having a lie in instead.

The weather forecast here in Norfolk was very good, the tide was right, so off to take some pictures. Wandering around the estuary at Morston, a small sailing village, as the sharp, morning light spread slowly across the water and climbed its way up the sides of the boats moored there, was one of those magical moments which make you feel good to be alive.

Having taken a few shots, I drove into Wells to wander along the front, and find some breakfast. I ended up with the Anglo-Italian fusion of Toasted All Day Breakfast Panini, and a large Espresso, from the local Deli. As I chomped my way through this, a Police Car appeared and parked on the open space next to the quay. It was quickly followed by an ambulance, which in turn was followed by a Fire engine. 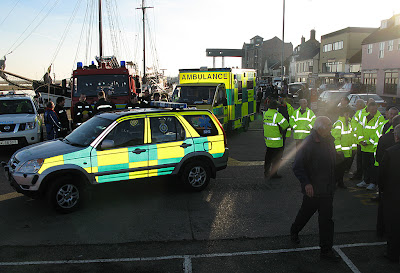 THE CLANS GATHER
The crews all got out, quite relaxed and chatting away. I know life in this part of the world is a bit Manana-ish, but your first thought was that with what was clearly quite a sizeable emergency unfolding, a bit of zip wouldn’t have gone amiss.

Then the Coastguard boat, fully manned, “Shipshape and Bristol fashion” chugged around the channel and moored, followed by the fully kitted-out Lifeboat crews ambling up to have a chat with each other. 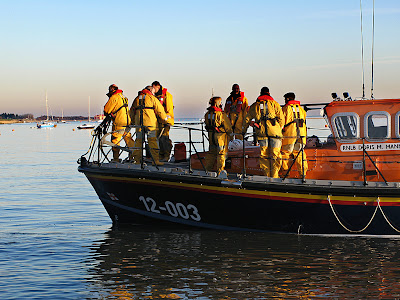 THE WELLS LIFEBOAT AND CREW
Then the local Community Police girl (disarmingly pretty, I have to say) on her designer bike, and her equally disarmingly unpretty male colleagues on their machines. Then a shoal (don’t know collective noun for) of Flood Wardens arrived, one wearing a very rakish Bush-Wacker hat, at the same time as a large orange and professionally equipped Rubber Dinghy. 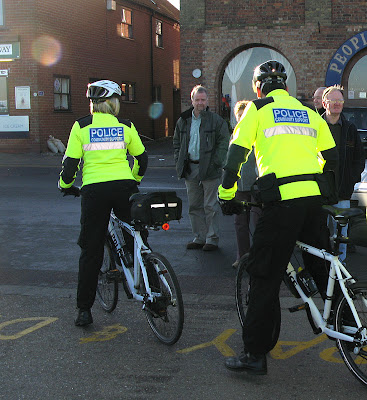 NOW THAT'S WHAT I CALL COMMUNITY POLICING
By which time it dawned on me that all this was in all probability not the result of a local resident’s emergency call. Especially when a guy erected a ladder at one end of the quay, climbed up it and got out a loud-hailer and a camera. 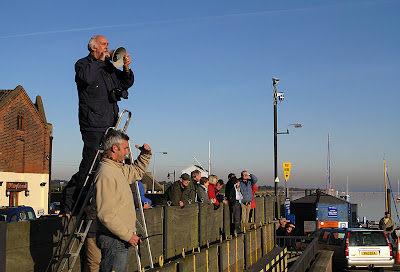 CREATING ORDER FROM CHAOS
As the minutes passed, a massed gathering of the Norfolk Rescue Clans came together, increasingly obviously now to have their pickie taken. There seemed to be an awful lot of them, and if the chaotic way they milled around as the poor photographer tried spectacularly unsuccessfully to create at least a veneer of order is anything to go by, then having your accident in the next county would seem to be a prudent self-help strategy. I suspect though, that when it’s serious, and they move into action properly, you’d see a very different side to it all, but on a lazy Sunday Morning, it all seemed like someone trying to herd cats. 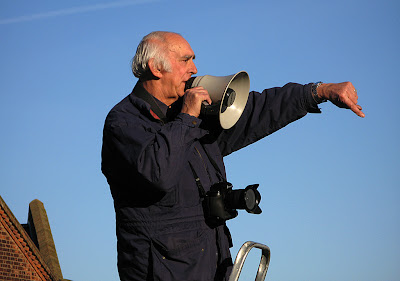 STAND STILL OR I'LL SHOOT YOU
The photographer had me totally transfixed – he moved everyone backwards, forwards, sideways and back again. He seemed to have them putting their helmets on, taking them off again, turning sideways, looking to the front, not picking their noses and generally trying, without any visible success, to get them to behave like honourable, grown-up members of the county’s accident and recovery structure system. But as time went on, the cast showed a slowly collapsing level of interest (actually not very much at all), and when he announced that “the helicopter” would arrive in 15 minutes, there was a communal groan and he lost them completely. They had 10 minutes at least where they could simply chat to their mates or try to get off with the female Police Officer by asking her intense, searching technical questions about her bike. 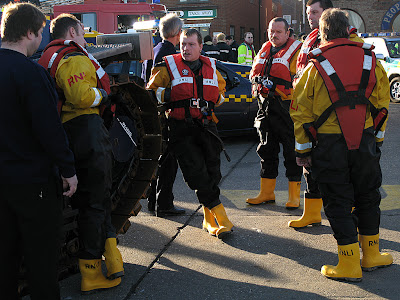 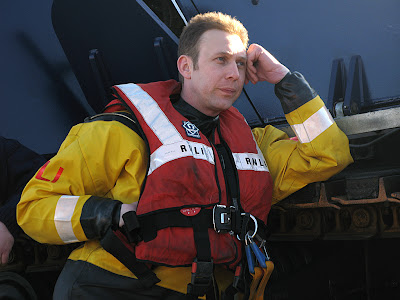 ..... TOTAL COMMITMENT
After the 15 minutes, exactly on time, the helicopter appeared, very “Apocalypse Now”, low on the horizon, and all we needed was a decent military band to strike up “The Ride of the Valkyries”, and, in my eyes at least, the day would have been complete. But Ford Coppola he was not. The photographer raised his loud-hailer to try to tell the helicopter pilot what he wanted to do, and suddenly dropped it, realising the pointlessness of what he had just done and clearly hoping that no-one had noticed.

The helicopter could only fly slowly past, since hovering at the most appropriate spot was apparently not allowed, so the photographer only had one go at getting his picture. With exquisite timing, we now had the glorious sight of some slightly disorganised old gent, who clearly had no idea of what was going on, deciding to walk slowly and painfully with his stick across the front of all the carefully orchestrated groups. He’d got halfway across before our snapper noticed him, and a couple of helpers tackled him to try to bundle him off the set before the helicopter arrived a few seconds later. He did a pretty good “Mr Bean” impression, except in this case you knew that he really didn’t know what was going on. 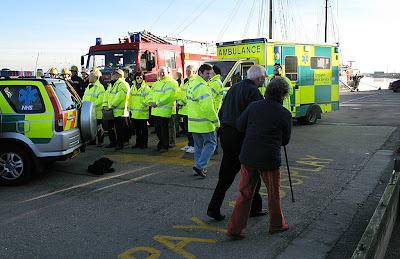 THE INTRUDER DEPARTS
It probably reflects very badly on my image as a nice, caring person, but I found all this utterly hysterical. The frantic jibbering of our man on his ladder when he saw the intruder was an utter joy to see.

The rest was, in all honesty, a bit of an anti-climax. The helicopter swung its way past, our man pressed the shutter, and he asked a henchman, who, one assumes had “Walkie-Talkie” contact with the helicopter pilot, to get him to go round again, which he did. Everyone said a communal “Cheese”, and our intrepid snapper had the luxury of two bites at this particular cherry.

I have to say that, when it was all finished, they all looked very professionaI, and gave a real sense of comfort that if you got into difficulties, there was a real team waiting to help you out. As far as the photographer was concerned, I only hope he’d remembered to put a new Memory Card in his camera, and charge the battery.

norfolk,
wells,
photography,
coastguards
Posted by rogerc at 8:57 am