It always amazes me how one simple image can set the mind racing to drag back something which I had forgotten. My friend Chris, who writes a very erudite Blog on Things Computorial (enigmatically titled http://chris-linfoot.net/ – read the entry for 22nd June), a small proportion of which I can actually understand, put up an image the other day which he had taken on a holiday recently. He had been with his family in North Wales, and the picture below jumped out at me. 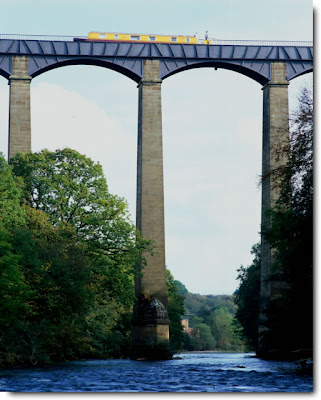 CHRIS'S IMAGE OF THE SNAPPILY NAMED "PONTCYSYLLTE AQUEDUCT"
It is of an aqueduct which carries the Llangollen Canal over the River Dee, and shows a boat crossing it. This is no ordinary bridge – it’s a Grade 1 Listed Structure and is currently up for consideration for World Heritage Status. It is one of the very first in the world to have been constructed from cast iron, and was built by Thomas Telford in 1805. Many people, apparently were sceptical when they first saw the delicacy of the design, but good old Telford believed in his sums, and went ahead. £47,000 later, the structure, which stands 126 feet above the river, and is over 1000 feet long, came into service, and on the basis that it’s still there 202 years later, I suppose you couldn’t blame Telford for waving two fingers at his detractors.

Ten years ago, almost to the day, we went on a short canal boat holiday along the self same canal. For reasons I can’t explain, it was also (to date) our last. We picked the boat up a few hundred yards before the bridge, which is actually the second of two aqueducts in close proximity, and got our comprehensive instructions from the Welshman at the boatyard. “Push this to go forward, pull this to go backwards, and pass on the left” was about it as I remember. No mention of the bridge, bless him. 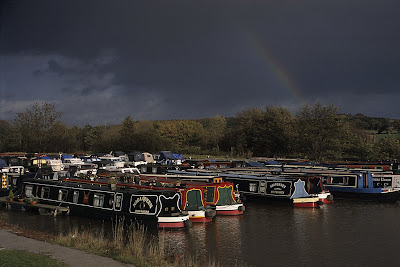 THE BOAT-YARD
It was a windy but bright day, so we gave the throttle a shove and took off. It handled like a three wheeled supermarket trolley – all over the place, and we zig-zagged our way rather drunkenly into the main channel, which was not that wide. Because the canal is built in the hills of Wales, it twists and turns to make some effort to keep on the level round the bases of the hills – very beautiful, but I could have done with a nice straight bit to get the hang of the oversteer. 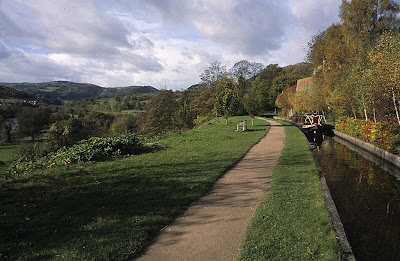 Over one aqueduct which was quite sheltered, and you thought “This is not as difficult as people say”. A sharp right turn, and you start out on this second monster. Now the laws of hydrodynamics tell you that when you force something through a narrow water channel, because you have to move the water in front of you through the gap between you and the side, the drag of the boat increases. Well, I did have a degree in Theoretical Aerodynamics, so nodding sagely to myself, I shoved the throttle forward a bit to counteract this extra resistance.

As we got onto bridge proper, the wind started to increase, and the resistance increased, and I pushed the throttle forward – and we very gradually started to slow down. More throttle, more wind, result - less speed. By about the middle of the bridge, the throttle was wide open, the wind was blowing a gale, and we elegantly came gradually to a stop, and started to move very majestically backwards.

Now when young Mr Telford built his bridge, he’d clearly got some miserable Finance Man working with him, because they decided to put a walkway on one side, with a guardrail on it. However, on the other side, they stopped the vertical side of the iron channel just over the top of the water level, and, although they put holes in to fit a guard-rail on this side, they never bothered to fit it. So, there we were, 126 feet up in the air, and if you took one pace to the left, after about 6 or 7 somersaults with pike, you spread yourself over a not inconsiderable area of the valley below. Mmmmm.

So, with yours truly as Manager, two members of the crew, to whit, one Wife, and one Son-in Law, (Yes, I know what you’re going to say) were dispatched to act as dray-horses, and add a further 2 horsepower to the engine. We slowly crept across the bridge, and after a further 500 feet reached the other side – knackered. Well, they were. 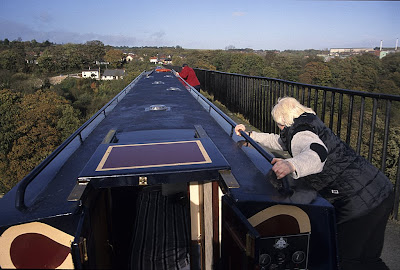 A HELPING HAND OR TWO

The rest of the holiday was, to coin a phrase, plain sailing. Watching the world go past at 4 miles per hour, walking along the tow-path with the only dog in the world which got sea-sick on a canal, and stopping in the various pubs alongside the canal bank for sustenance, both solid and liquid – there are many, many worse ways to spend three days. 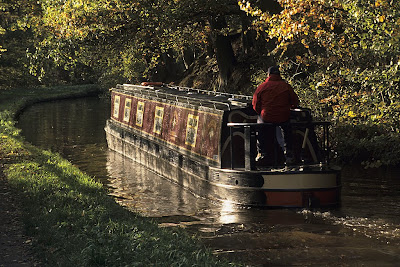 STEADY AS SHE GOES

Going back when we neared the aqueduct, the thought entered our heads “Here we go again”, but, of course the wind was behind us and we shot across the bridge like a rocket. 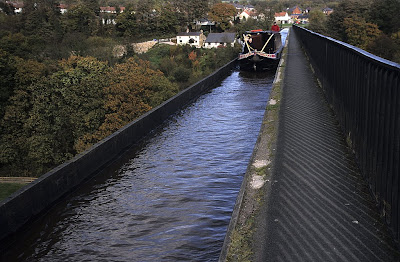 RETURN JOURNEY, JUST LOOK AT THE SIDE OF THE CHANNEL!

I have to say, in all the kerfuffle, I think I forgot to make any comment to the poor sods in the boat waiting at the other end – anyway I think they were Welsh!

You have a good sense of humour.. good for you!!!

We're going on a narrowboat later this month (August), and I wanted to show younger son a picture of the only truly frightening thing on the British waterways, and - yes, that was it - fourteen years ago, but still as vivid as if it were yesterday. Talk about a short step into Wales....