Around twenty five years ago, we went two or three times en famille to Provence for our annual holiday. It was a marvellous place to spend a couple of weeks each summer – the light, the views, the food, the people, the wine, the markets and a very relaxed way of life ….. and … and. It was no surprise over the next few years to see the semi mass migration of British people wanting to set up a second home there, or just live there permanently. For reasons I can’t explain, it has taken me until May 2008 to return.

One of the unique aspects about the place is the number and the quality of their Roman antiquities. You can’t call them ruins because in most cases, they aren’t ruined. Within a thirty or so mile radius of where we were staying, you could visit Arles, Nimes, Orange, Vaison la Romaine, Les Baux and be transported back two thousand years in an instant. You can walk inside them, outside them, underneath them, and on top of them. They are real world treasures, not screened off, to be admired from afar.

When, around the birth of Christ, Rome decided to flex its muscles and invade/educate (Delete as applicable) the Western World, the first place they annexed was Provence. The name says it all – “Provincia” in Latin means The Province. They took, among other things, their civilisation, their sense of structure and order, their vineyards, and their buildings – Oh and the Aqueduct. For further information on this, please see “The Life of Brian”. The buildings and the vineyards are still there.

Many of the Roman structures leave you impressed, but there are a select few which make you absolutely gasp. “How on earth did they do that?” will be on most people’s lips when they see the theatre at Orange, or the Arena at Nimes. But the one that does it for me is an aqueduct which bridges the River Gard, and was built around 1900 years ago to carry water to Nimes – the Pont du Gard. It’s a simple piece of utilitarian construction – but one which to my untutored eyes is quite beautiful. It performed a simple but vital function, and the Romans constructed something that simply “does exactly what it says on the tin”, but in Latin, of course. I haven’t actually set to and measured it, but I’ll bet that if you match Golden Sections and Fibonacci numbers to it, you would come up with some things of interest. It sits so perfectly in the landscape. 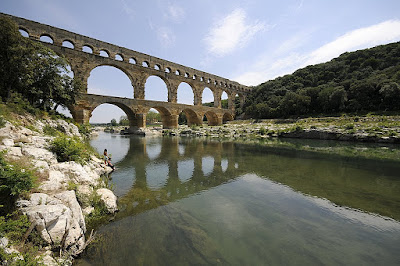 IS THAT, OR IS THAT NOT, A FANTASTIC SIGHT? 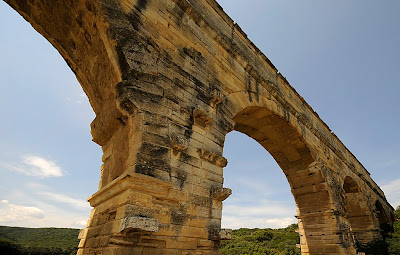 UNDERNEATH THE ARCHES
The other thing that strikes you immediately when you first see it, is its size. The top of the aqueduct is 165 feet above the river – that’s the height of Nelson’s column. It’s around 900 feet long, and the blocks from which it’s made weigh up to 6 tons each. The thing that clinches it for me is that there is no mortar between the stones – and it doesn’t leak!.

We’d have more than a little difficulty doing that today.

I approached it a few days ago with tons of anticipation. The last time we were here, we wandered around it at river level, and then took ourselves off to the top, where we walked along the massive stones which cover the water channel, gazing down 160 odd feet over the (non guard railed!!!) side onto the river a very long way below. The picture shows what it was like in 1985. Masses of people there, picnics in full flow, children waving their legs over the edge, and no-one worrying a great deal. 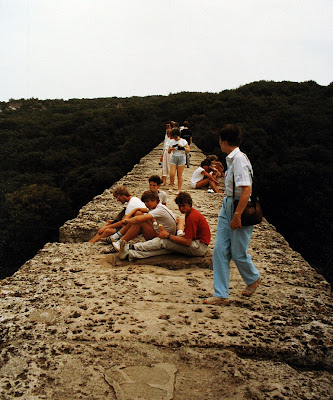 TAKEN IN 1985 - I'D LOOK WHERE I WAS GOING IF I WERE YOU
When you got to the centre, the stones covering the water in the aqueduct were missing, leaving the centre section as two vertical stone side walls, each around 2 feet wide, with the water course separating them. If you wanted to get to the other side, you simply walked across the top of one of the walls, and “Bob’s your Uncle”. Simple really. My daughter, who was 12 at the time, and I did just that, because, in 1985, it seemed the natural thing to do. We remember remarking at the time how refreshing this was. In England, the whole thing would either be cordoned off, or there would be guard rails and notices everywhere, and we said then how good it was that the French took a much more laid back approach to it all.

It’s still an awesome structure, and there are still no guardrails there, for the simple reason that you are not allowed anywhere above the base level without a guide. And then only, I think, inside the aqueduct, where you can’t fall off. I don’t know why I found this so depressing, that the Men in Grey Suits had managed to withdraw this avenue of pleasure for today’s world. I suppose I am looking at it a little through Rose coloured spectacles. I’m sure there must have been a few cases of Pierre giving his irritating little brother Lucien a push just a tad harder that was strictly necessary, resulting in an immediate and rather messy reduction in the number of family mouths to feed. But, it still left me thinking that if it’s got to the French, then there’s no hope. 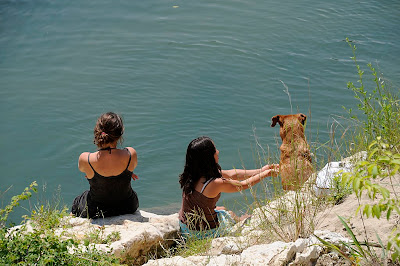 PICNIC BY THE RIVER 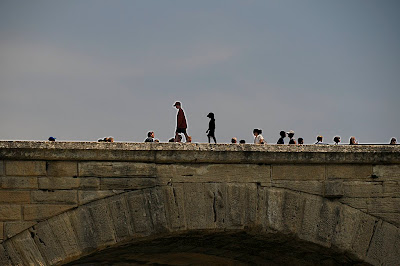 WALKING ACROSS FOR CISSIES ON THE LOWEST LEVEL - FALL OFF HERE AND YOU ONLY BREAK A COUPLE OF LEGS
So, for the average visitor, you get a huge crick in your neck as you stare vertically upwards. It’s still one hell of a sight, imposing and majestic, and something you don’t forget in a long time.
Tags:
provence,pont du gard,health and safety
Posted by rogerc at 5:21 pm

My 1974 photo on my son Peter's Flickr at http://www.flickr.com/photos/petemacleod/4889070190/in/photostream/ shows the missing centre section and the drop to the river below. I so heartily agreed with your comments that I linked your blog when commenting below the photo.