My mind must have been on other things, because the last post in this (very) occasional series was almost two years ago. Ye Gods.

Anyway, I was struck by the one here, the other day. It's a really simple picture of the sun, with the Space Shuttle passing across a section of the disc. But Wow, what a terrific image. 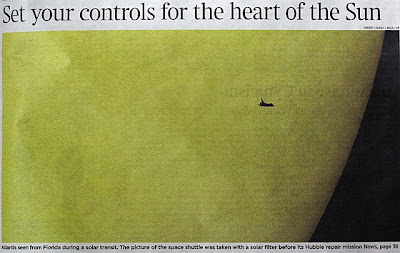 Now the picture is not one any of us could take. A millionth of a second at F8 will not work on my humble Nikon. It needs some special equipment, but that doesn't stop it being a great picture. The credits on the picture go to Thierry Lagaut, and NASA.
Given the subject, it still comes across as a humbling picture, one which puts the machinations of the odious UK Parliament Speaker, and our MP's expenses into perspective.
And I just LOVED the title that the Newspaper editor chose.
Great image.