NEVER IN THE FIELD OF HUMAN CONFLICT ....

If you have any interests in politics, and the way our country is run, you will realise that Parliamentarily speaking, the UK is currently in the throes of some pretty hefty seismic goings on. I do not intend here to hammer the same nail into the same wall as the newspapers have been doing about The Speaker, MPs' expenses, Sleaze, corruption, lack of moral integrity etc. I just read rather dejectedly about it, and wonder whether the 650 MPs collectively realise just how much damage is being done to the fragile but crucial trust we need to have in those who are in Parliament.

So No Comment on this issue, if only to avoid pushing my Blood Pressure into the stratosphere by getting wound up about Gorbals Mick or the cost of a Ministerial Bathplug or a Parliamentary tin of dogfood, or MPs who can only see the error of their ways AFTER THEY ARE FOUND OUT, and even then sometimes not. And, by the way we should also hear it for all those zealous Newspaper hacks who have let this issue pass them by on the other side of the road for decades without poking it hard enough and long enough with their stick. Where were the British versions of Bob Woodward and Carl Bernstein when we needed them?
Now look at my blood pressure!!

As a bit of an antidote, firstly, if you want to see the other side of this horror story, have a check on the people whose names have NOT appeared in the Telegraph’s Name and Shame tirade over the last couple of weeks.

Secondly, and on a much more pleasurable subject, we’re doing some building work in our East Anglian Bolt Hole, and driving around recently to pick up the odds and ends you need to finish the job off, I couldn’t help but be struck by the beauty of the countryside and villages. And the utter timelessness of some of the surroundings.

A village a few miles from where we live over here rejoices under the name of Little Snoring. Now tell me you don’t get a feeling of pleasure when you read that name. It’s a sleepy little place, although, in a quirky and pleasant Norfolk way, it’s somewhat bigger that the next village along the road – Great Snoring.
Yes, I know it’s illogical, but that’s part of its charm. The “Great” apparently refers to its age, not its size, and the “Snoring” is a corruption of Snaer, a man’s name who was the leader of some of the early settlers around here.

Each village around here has its own lovingly hand painted sign, usually made from wood and mounted on the Green in the centre of the village. This one is Little Snoring’s – 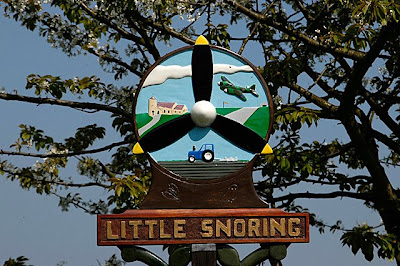 60 years ago, this place was not the sleepy backwater it is now. In the middle of the Second World War, this county, because of its flatness and proximity to the European Coast, was home to around 160 RAF wartime Airfields. The days and nights were drowned out by the sound of Spitfires, Hurricanes, Wellingtons, Mosquitos and Lancasters blasting off to take on the Germans. Little Snoring was one of these airfields and it is this which is celebrated by the three bladed propeller in the centre of the sign.

The runways have been ploughed up now, apart from a small remnant which is still there and used as a private Flying Club today. Hence the Windsock – 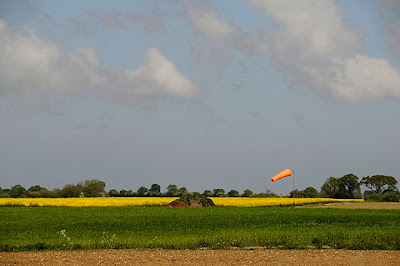 A field or two away is the local church. Norfolk churches are things of beauty. Many are far larger and more ornate than you’d expect them to be, with unusual design features. We have thatched ones, Brick and Flint ones, Beamed ones, and here in Little Snoring, the church has a separate tower which is round. 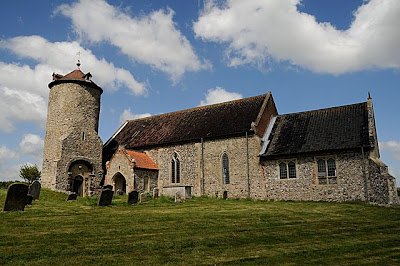 You get a strange feel walking around the churchyard on your own on a windy morning, reading the inscriptions on the gravestones – almost as if you’ve travelled back half a century in time.

I found one gravestone commemorating a lady with the same rather unusual surname as mine. 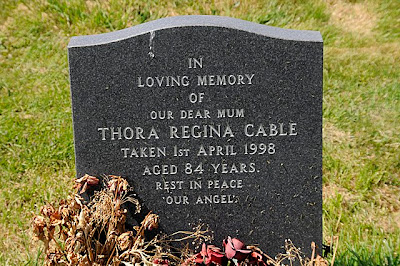 And another to the wife of the camp commander in the mid 1940s. If you do the maths, he can’t have been more than 25 or 26 years old when he was the head honcho. 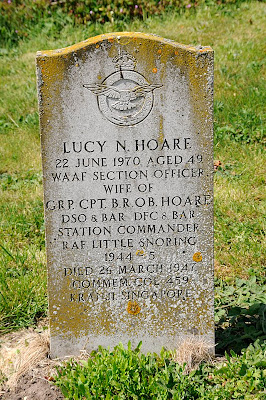 It was so different then.

Inside the church are the very poignant memorials to the many pilots and airmen, who took off one day from this tranquil and beautifully understated Norfolk countryside, and never came back.

You can almost feel the contrast between the Parliamentary goings on today, and the ways of 1942-3 - rather depressing.

Never in the field of human conflict was so much owed by so many to so few.

These were Churchill’s perfect words about “The Few” in the mid 1940s. Transpose the “few” and the “many” in the sentence, and you get a simple soundbite which sums up the way too many of our MPs are behaving today.

-shame about the corrupt politicians, but I loved the travelogue. ;-)