Michael Jackson has left the building.

And now as sure as day follows night, we’ll get the recriminations, the collective "seeking after the money" merchants, the disbelief, the conspiracy theories, the denials, the “It’s all your fault” accusations – all to be shortly followed, I suspect, by the process for canonisation and subsequent deification.
And yet, I'm not totally surprised he's gone. I've always had a feeling that he was not destined to die an old man. But the shock still pegs you back.

In truth, I was never a total out and out Michael Jackson fan, although I did think he was one of the very few genuine “superstars” of the pop music business. Presley, the Stones, the Beatles – then who? Michael Jackson came next. And who since? Madonna – possibly, but only possibly.

Along with every other member of the human race, I had a copy of “Thriller”, and the only other LP of his I bought was “Off the Wall”. So from a 63 year old’s perspective, his reign at the top of the tree started to fade around 1983. But what an album “Thriller” was. You watched “Top of the Pops” for months on end, and when one song off it started its fall from the very top of the charts, another one was released and took its place. I think there were 7 No. 1 hits of the record. Quite crazy.

I’m not sure that on balance I don’t actually prefer “Off the Wall” as an album. It hasn’t got the utter slick, perfectionism of “Thriller”, and to me it seemed to be so fresh, so simple and so different when it came out in 1979. Just look at the cover and remind yourself of what he looked like then, to show what 30 years of money, pressure and Pop Baggage can do to you. You have to be made of very stern stuff not to be engulfed by the Pop Machine. And he certainly wasn’t.

My wife recorded a programme last night which showed a wide sample of the music and the videos over his life, and I have to say, I sat there with my mouth gradually opening as I watched it. I had completely forgotten just how good he was. The songs, the presentation, the dancing, the video production. Absolutely stunning.

The picture below, lamentable quality though it may be, was taken on 15th July 1988, over 20 years ago. I had taken my daughters, who were completely mad about him, to Wembley Stadium in London, and, together with 71,999 other souls, I was treated to probably the slickest, most professional pop concert I've ever attended. All his hits, not a beat out of place, full of energy and pazazz. As well as the Moonwalk, which I still can't do. A terrific evening, and I came away far, far more impressed than I'd thought I would. 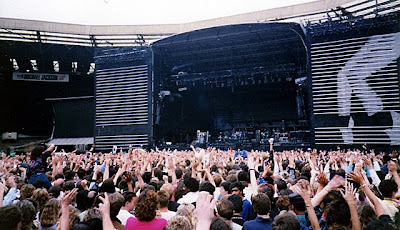 MICHAEL JACKSON IS THE PIXEL IN THE CENTRE!

And yet, so much then seemed to go wrong. He strode over the music business for more than a decade as a colossus – no-one anywhere near him in the Eighties. And then the great unravelling, They say in life that sometimes you’re Nelson on top of his Column, and sometimes you’re the Pigeon. I think most of the time, to extend that analogy, he had Wings, and not One Eye, although I suspect it swapped around later. But you still can’t take it away from him. He did things in the weird world of Pop Music that nobody had done before, and if we’ve got any sense of perspective, that is what we should remember him for.

Forget the colour change, and the facial rebuilding, forget the baby over the balcony, forget the chimpanzees and the deserved or undeserved undercurrent of rumours about him. Just listen to the music and watch the videos. It’s only when something like this happens that you try to see the man in the whole, in the round.

The Billie Jean video is an absolute masterpiece. The unforgettable music, with tension that nags away at you. The brilliant cinematography, cutting at breakneck speed from one amazing image to another. The inspired piece of genius with the street pavings lighting up – stunning. Oh, and the dancing. It’s as good as it gets.

And now he’s gone. As well as the Michael Jackson programme, my wife had recorded a concert by Elvis Presley from Hawaii, which I watched soon after. I couldn’t help, as I watched Presley’s stupendous performance, wonder if in years to come we’ll put them both in the same category.

My 8 yr-old asked me who Michael Jackson was. Through my explanation, I opened Youtube. The kid has been playing MJ videos nonstop for 2 days, especially Billie Jean. You're right- it's mesmerizing, my kid saw it instantly. Although that's how I'd like to remember Michael Jackson- as the character from that video- we both know that it wasn't the truth. Shame, that.