DARK SIDE OF THE MARS

Just occasionally, you wake up, completely unaware that your life is going to change, and change seriously before the day is out. All too often these days as the years pass, it’s not something good. But yesterday, I had one of those life-changing days which left me on a real high.

Going about my business, causing offence to no-one, I went to the local shop to pick up my newspaper, and – 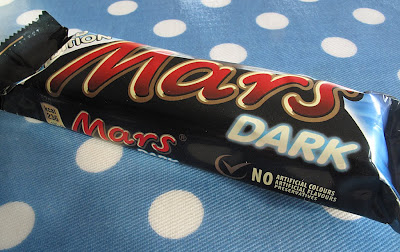 A RARE SIGHTING - AN UNOPENED ONE
You have no idea how important this is in my life. I don’t eat an enormous amount of sweets, but once in a while, I get hooked on one particular brand, and gross overload consumption, on a semi-industrial scale, ensues.

It’s really quite pathetic, but if that’s the worst thing I do, well ……

The fiendish Marketing Men from Mars (that’s the Mars in Slough, not the one on the way to Jupiter) first dreamt this product up about 10 years ago. I remember buying one in a petrol station, and consuming it on the way home from work. I think it was called the Mars Midnight then – very soft lights and “Would you care for a nightcap, my dear?”.

Its dark, slightly grown up chocolate taste mingled with a fluffy and light nougat, much whiter than normal, complemented by a layer of soft, squishy caramel. I thought it was definitely a confection for those people with taste, refinement, class and a rare touch of discrimination - the Mars Bar for the Connoisseur in fact. They are definitely to be eaten with your little finger crooked daintily in the air, not wolfed down in two bites or heaven help us, consumed in the (alleged) Jagger/Faithfull style.

So I binged on them, and became a hopeless addict. And what did the bastards do then? They took it off the market without a by-the-by, or a hint of a bit of prior notice. Suddenly they just disappeared. I’ve never been into drugs or that sort of thing (Alcohol’s not a drug, it’s a vital food, necessary for the efficient functioning and smooth operation of my body) but over the next few days I felt exactly how I imagined a crack addict must feel going down the “cold turkey” route. I drove around town looking for out of the way little shops who might have been left with a bit of unsold stock. But no luck. It was almost as if the fiends from Slough had driven round every shop they’d sold them to and taken all their unsold ones back in to captivity, just to torment me.

Not a pleasant time in my life at all.

And then, about 4 years later, the things reappeared. I don’t know why. They just did. Is there someone in Mars who enjoys irritating their customers, Mars Bar Teasers in effect who get there kicks seeing grown men driving around small rural shops late at night looking for non existent bars of chocolate. I think it’s all a bit sadistic personally.

Anyway, I am not one to make the same mistake twice. I came up with a personal Worst Case Scenario, and assumed that this time, it might also only be in the shops for about four weeks. So I bought two boxes of the things and salted them away as Strategic Stocks, hidden away from prying eyes, in a location that would go with me to my grave.
Except of course that this totally missed the point. They did indeed strip the country’s shelves bare of the infernal things again after a few weeks, and I sat back with the luxurious thought that I was safe from their actions. Two boxes, at 24 per box is 48 units of pleasure. 48 units of pleasure at 2 per day means 24 days ie 3 and a bit weeks. I don’t recall the details now, but I suspect that my re-addicted state probably resulted in me mainlining on more than the planned "One with my Morning Coffee and One with my Afternoon Tea strategy". There was possibly an "Oh I’ll just have another one before I go to bed" bit of the plan that I may have forgotten to include. So, a couple of weeks later, they’d got me again. And this time there was the added personal guilt and inadequacy of trying to outwit them and failing so dismally.

Anyway, this time it’s going to be different. I’ve checked on the website and it’s a “Limited Edition” on sale for four weeks. Why the hell do they do this? Nastyness for its own sake? The whole point of sweets and confectionery is to give people instant pleasure, so where is the need to behave in such a despicable and unpleasant way? Is it just to show a small section of the population that Multinational companies are all powerful, and just don’t you forget it? I’m not a litigious person, but I'm sure most liberal minded Human Right Lawyers (is there any other sort?) would advise me that a test case in Strasbourg was a winnable proposition.

I think there’s two weeks to go. My local shop has 4 boxes in store, and I’ve also scouted around to find secondary, back-up sources of supply. I’ve measured the size of the box, and done a 3-D space review of my fridge to investigate the close packing capabilities on the shelves. If, without being noticed by the lady of the house, I get rid of the non essentials like Milk, Butter, Vegetables and the other fripperies, I think I can get around 1000 inside. Unfortunately, the boxes will not fit vertically in the door bins, so the 15 bottles of wine currently in them there will have to stay. Maybe I can live with that.

At a strict ration of 2 per day, this will last around 1½ years, which is better than the previous 5 and a bit weeks, but still not long enough to span the four years or so enshrined in Mars’s devilish Product Cycle.

Apart from buying some additional shelving in the coolest part of the garage, for additional overflow storage during the winter, I’m worried that this 2½ year gap is unfillable. I could consider planning on One per day, rather than Two, splitting each one up in the morning into two halves, but I’m not sure the early morning will-power needed for that strategy to work, would be strong enough.

Perhaps my children, who live quite close, or some well meaning friends, might squirrel some away for me. Except, most of them are quite partial to the taste as well, so when I went to collect them, it’s quite possible that they may have “disappeared”, a bit like the “Angel’s Share” in a Whisky Distillery.
All this means that it’s already beginning to look a bit like being on the 10th day of a two week holiday, when the thoughts of the end of the holiday begin to crowd in on the unalloyed “Away from it all” pleasure you’ve felt up until then. The Dark thoughts.

Ah! Dark Thoughts. Excuse me. I’ve just got to go to the fridge. I might be some time.
Tags:
mars bar,
mars dark
Posted by rogerc at 3:32 pm

And While I was at it I also found this article about the history of the MARS bars wghich seems to indicate that since last month they are on permenent distribution in Canada as a limited addition. So maybe you can get them shipped regualrly from there and eleivite the panic and need to stock up every 4 years when the come your way.
Though I've never tried the dark MARS bar the regualr was always my my favorite growing up. But now you've piqued my interest abiout this one. Maybe I'll have to order some myself unless I can find some here in CA
anyway, I hope this info helps! Happy Munching!
Shirley Marshal Kesler
San Juan Capistrano, CA
A Theatrical Properties Master who get a kick out of finding things

Forgot to include link for history article:
http://www.answers.com/topic/mars-bar