IT'S ONLY A GAME

Regular readers may possibly have noticed that I have a rather unhealthy interest in Cricket.

Pause for Groan – but, although this little piece is related to cricket, it isn’t really. It’s about a man who plays the game at the highest level, and the way that greatness sometimes brings problems to blight someone’s life seriously.

Marcus Trescothick. He currently opens the batting for Somerset, and he’s pretty good. Actually, he’s bloody good. One of my absolute favourite players. 33 years old, he played for England for many years, and was a key part of the England team which won the Ashes in 2005 – Player of the Year in fact.

I don’t recall a better opening batsman in the country in the last 40 years. I suspect, for the first few years of this century, his was the first name the England selectors wrote down when they selected their team, apart from the captain. Actually, given some of England’s recent captains, I’m not sure that the captain’s names got written down before him that often, but that’s another story.

Trescothick played some stupendous innings for his country, and amassed 5,825 runs during the 6 years he was in the England team. To put that into some sort of perspective, only 10 men have ever scored more runs than him, with Graham Gooch’s 8,900 topping the list. None of the 10 above him played for their country for less than 12 years amassing their totals, and some of their careers actually lasted more than 2 decades. His rate of scoring must be the highest ever.

His style of play is very individual. He does not move his feet as the purists say you (or he) should. He has exceptional Hand/Eye co-ordination, and when you watch him, he seems to have all the time in the world to stop the ball in mid flight in his mind, examine what it’s doing, decide on his shot and then play it. An English Virender Sehwag – and that’s a compliment of the very highest order. He’s a big, solid man – 6ft 3in – and he hits the ball very, very hard, but with a slow, almost languorous, even contemptuous swing that looks so simple, but is so effective. You only have to look at the bowler’s face when Trescothick gets his eye in. They know they’re in for the equivalent of a sporting execution. There are very few players who you’d run to the TV to watch if you heard they were batting, but he’s absolutely one of them. 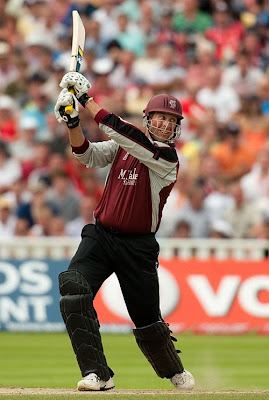 IN FULL FLIGHT, PLAYING FOR SOMERSET

But ….. there had to be a but. When he went out to India in 2006 to play Test Cricket out there, he was found collapsed and sobbing his heart out the Dressing Room. He came home under a media driven secrecy cover. “It’s a bug”or “Family problems” were some of the media's explanantions. Speculation about his marriage, the reasons were many – and all wrong. Trescothick didn’t help because he tried to cover it up, probably from a shame viewpoint. The truth was that he had clinical depression, and it had finally exploded. Why? Perhaps being a long way from home, or playing for England, or something else. Who knows? 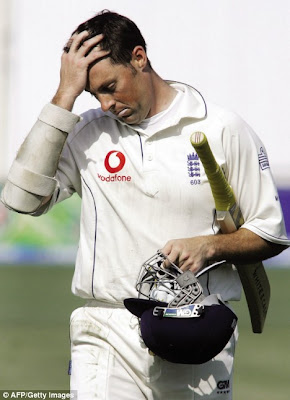 Two years later, and after several failed attempts to return to the world cricket stage, it’s still there. He wrote a very moving and honest book about it all (called “Coming back to Me”) which takes you through the awful build up to his breakdown, and its consequences, in painful and gruesome detail, a book which gripped me totally and won the William Hill Sports Book of the Year in 2008.

He still played on for his county through all this. England missed him dreadfully, and some well meaning but wrong people clearly tried to get him to return to Test Cricket, because he had left a gaping hole which is still quite unfilled. Thankfully he decided that his health was more important than any cricket match, so he concentrated on playing for Somerset. And in 2009, when you look at the Batting performances of all the hundreds of County Cricketers in this country, guess whose name is at the top. He scored the prodigious total of almost 3,000 runs this year – mind boggling - and he looked as relaxed as could be doing it.

A couple of months ago, with Somerset taking the World Stage in India for the Champions World Twenty20 League Series, he agreed to go and represent his county. You watched him with a good deal of trepidation and, rather depressingly I for one immediately felt from the start he was not the man you’d seen playing County Cricket in England during 2009. Out of sorts, timing all over the place, and not scoring any runs. Lo and behold, the “black demons” had come back, and he had to fly home prematurely, probably for the last time. How very sad.

He clearly wants to be back on the world stage, otherwise he wouldn’t keep subjecting himself to the ordeal, but the time must be here where he realises that “That was then, and this is Now”. I suspect he’ll now put it all behind him and just play county cricket for a few more years. I also suspect that he’ll stay right at the top of the County averages when he does that. Lack of pressure, and being comfortable with yourself.

A real crying shame for England, but for those of us who watch County Cricket, I, for one, think I’m in for a real treat.