DISPOSE OF THIS AEROPLANE RESPONSIBLY

I’ve decided to collect some of my images together and publish them in book form to be given to friends and family. I want to use one of the many on-line “Photobox” type set-ups where they offer a system which allows you to upload your pictures and text into one of their book templates. You pay them money, you wait a few days and they send you back your photos in a nicely bound book. Simple.

Except that, having a degree of perfectionism about me in this sort of thing, none of them quite offer the layouts which I actually want. And since there are still parts of me that haven’t progressed beyond the “I want it EXACTLY as I want it, not how you want me to have it” phase, I’ve decided to do it myself and do all the page set ups at home, and send them the pages as finished products, thereby bypassing their templates. Simple, once again.

So I purloin a very fancy, Industrial Strength Desk-Top Publishing Program, called Adobe InDesign, which is, in the English vernacular, the “Bees Knees” of Desk-Top Publishers. The Rolls Royce of DTPs. So, off we go on the learning process to get to grips with it all.

Into the minefield again. We have all learnt the ways of myriads of machines and gizmos in our life, but the number of these I have had in my life where the Instruction Manuals are models of clarity, simple to read, easy to understand, logical in their thought flows, and capable of answering the questions the new user can’t fail to ask, in a precise and succinct way, can be numbered on a single hand – and one with the odd finger missing as well. Why is it so difficult to explain simply and logically what a product does and how it does it, without the reader needing to have been a founder member of the product’s design team to understand it?

It may, of course, be me. I may just be thick, stupid or hard of understanding, loose of thought, incoherent where logic is concerned or incapable of understanding simple instructions. I might be, but I’m not.

I have a degree in Aeronautics from what is currently the 5th best University on the Planet, I have an Accountancy qualification where, during one of the many exams we needed to pass, I came 3rd out of 3,845 other aspirants, and I have a reasonable understanding of how the UK Pension system is currently constructed. Ignoring the fact that the last claim may in fact be the most impressive of the three, this is not written to indulge in a bout of personal “halo-polishing”, merely to show that intellectually, I’m not useless.

So, what is it about Instruction Manuals? Why do they fail to do what they are there to do ie INSTRUCT?

There is, of course, a fundamental “Catch-22” in all this. The guy who writes the Instruction Manual needs to know himself exactly how it all works, otherwise he can’t possibly impart the information to someone else. Except that he then needs to write it for someone who knows absolutely nothing about the thing he knows everything about. It’s the difference between being an expert in a subject and being a good teacher in that subject. In the same way that Architects should be forced to live for a year in the houses they design, and aircraft designers should be forced to be part of the crew when their baby takes to the air, then Instruction Manual Writers should have to man the telephones in the call centres answering the calls from confused customers of products they’ve designed. They'd soon learn.

When I at University, we were taught in our last year by a few Post-Graduate Students, who probably knew more about what they were talking than anyone else in the world. Except they had no clue whatsoever how to impart that knowledge to anyone else. What was “obvious” to them, as they admired the acres of equations they had just scribbled on the blackboards around them, was, at least to this poor soul, NOT in any sense “obvious” at all. George Bernard Shaw said “those who can, do; those who can't, teach”. He might have been a really clever guy, but he got that bit completely wrong. The ability to impart something well is a completely separate skill which is just as important as the ability to do the same something in the first place.

I can recall buying a computer a few years ago and the Instruction Manual’s first words were “Switch the machine on”. Could I find the switch? Could I hell. It was cunningly recessed into the base of the machine, accessible only if you turned the thing over. You ring the Manufacturer up to explain your problem, and are met with a “Yes, you’re not the only person who’s asked that question”. Oh well, that’s all right then.

The person who’d written the Instruction Manual knew perfectly well how to switch it on: he just couldn’t put himself in the place of the poor soul who didn’t so failed totally in his job.

If I look back at Instruction Manuals and Text Books which I have laboured over in the past, there is only one where I thought “The guy who wrote this knows his subject perfectly, and he also knows perfectly how to impart his subject to a pupil.” His name was Captain Smith, and he wrote the Tax Manual for my Accountancy Course. It was the model of simple, connected, flowing logic, with nothing being assumed that hadn’t been explained earlier, each fact or subject building seamlessly on the previous ones, so nowhere did you look for the missing page which covers the bit of the subject where otherwise the “leap of faith” needed to occur. The result was he got me through the subject, and I found out later that in the Army, where he taught the subject, he had never had a student fail. It was a cheap looking book typed rather than type-set, and you’d walk straight past it these days to the glitzier, shinier ones on the shelf, but as a model of excellence in its sphere, I have known no better.

The problem today is compounded by the complexity of things. The last camera I bought was a Nikon D300. It is a quite remarkable piece of technology/engineering, and I admire it unfailingly. As a tool for taking pictures, it has transformed my photography. It is quite, quite brilliant.

BUT, its Instruction Manual is 310 pages long. And that’s just the English version, it’s not one of those multi-language jobs we get these days. I doubt if there is one person on Earth who has read every word in it. The only saving grace is that the machine is so intuitive in the way it operates that the Manual is almost superfluous. I mean, 310 pages! My life has a finite span, and 310 pages is just too much.

Discussing this with a friend, the other night, he said that the Instruction Manual for the Avro Lancaster Bomber used in the Second World War was available in print. So, off to Amazon, and guess what, there it is. It has 532 pages, and that’s the complete Operating Manual for the Aeroplane, hydraulic and electric circuits and all. Everything. 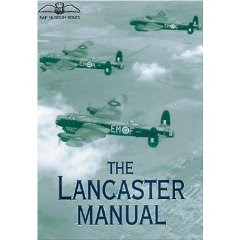 Some wag apparently wondered how they could cram the whole of the information needed to operate a complex State of the Art Bomber from the Second World War into 532 pages, when the new DVD Recorder they had just bought needed significantly more pages. His response was that the Lancaster Manual did not need the longish section his DVD recorder manual had on how to dispose of the Product safely, and also, for the Lancaster, the German and Japanese translation sections were not needed.