SEHWAG DOES IT AGAIN

Once again, I’m glued to the TV watching two of my favourite cricket teams in action – India and Sri Lanka. They are playing the last of three Test Matches in Mumbai in India. It’s hot and humid, and Sri Lanka have just been bowled out for just under 400. Not a bad score.

Except my favourite batsman, Virender Sehwag, is opening the batting for India. He has made a few false starts so far this year, although he did get 131 in the last match. Today, he made complete amends, and showed why, when he is on form, he’s the most exciting batsman in the World. He opened very gently for him, scoring only 15 off his first 31 deliveries. Very unlike him. But that was a bit like “Light the blue Touch Paper, and Retire”.

Suffice it to say, he batted for most of the day, and gradually turned the screw on the Sri Lankan bowlers in a display of utter professional batting. He ended up smashing a Not Out 284, scoring the fastest 250 ever seen in Test match Cricket’s history. If he scores another 16 runs he will stand as the only player ever to score three Triple Centuries in Test Matches. 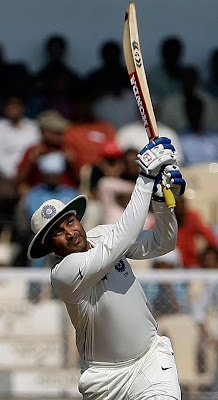 ON HIS WAY - ONE OF HIS 7 SIXES
He plays with a ruthless attack, with defence being the last resort. It was clear today that he wanted to hit Muralidaran, particularly, out of the game – which he did stupendously. You simply can’t place a field which will restrain him, and one suspects that around 17 men would be needed in the fielding side to slow him down when he’s in this sort of mood. Unfortunately, the rules only allow 11.

Tomorrow is another day, and India are already 50 ahead of Sri Lanka with 3 days left. They will plan to bat all day tomorrow to remove any chance of Sri Lanka even thinking of winning. Sehwag scores at such a rate that any team he plays for can get themselves in a winning position very quickly. I would love to see him get another 100 and beat Brian Lara’s 400 runs record, but that’s a really tall order. Apparently, he has a bad back. Imagine what he’d be like if he was fully fit! 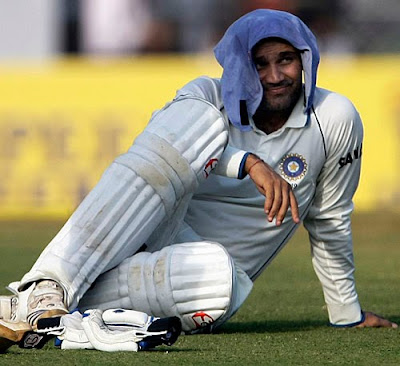 HAVING A BREATHER AFTER SCORING 250

The TV recorder is on for 4 in the morning. I can't wait.
Pictures by Associated Press.
Posted by rogerc at 12:32 am