CDs AND MARS BARS - AN UPDATE

Sometimes, posts on this blog are like buses. You wait ages for one, and then two come along together. This is simply an update to a couple of relatively recent pieces – the Ghosts of Blogs Past.

Firstly, musing musically over Christmas about a late 2009 post about CDs/LPs where each track hit the bell, made me think of two more. So, in order to maintain some form of editorial completeness, these are offered for posterity. The real reason for their non-inclusion was probably something to do with the gentle alcoholic haze in which that post was put together not actually aiding my aim of Total Artistic Recall.

ABC – Lexicon of Love – one of the best albums of the Eighties – still sounds fresh 25 years on.

Eagles – Hotel California – Yes, I know it’s right down the white line in the Middle of the Road, but I still think it’s terrific. I remember playing it about a dozen times in one day not too long ago. It absolutely reeks of whatever it reeks of. 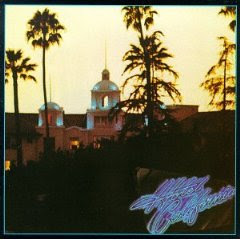 And Secondly, a culinary update for fellow Mars Bar Afficionados.

Following my purchase of several thousand of the Limited Edition Dark Mars Bars and my subsequent creation of a structured stockpile in several secret locations, I developed a plan to consume my strategic stock of them on the strict basis of One per Day.

You will no doubt be overwhelmingly impressed to hear that, as long as tomorrow is May 1st 2010, my consumption is absolutely dead on target. Self Control of an exceptionally high order, I think you'll agree.