Well, “The Wire” is finished and I still think of it as a piece of televisual genius. To me, the storyline was so overwhelmingly encompassing in the way that it dealt with the real, big problems of today with each of the five series given over to one over-arching theme. The balance of good and evil in everyone of us, contrasting the good in the bad with the bad in the good, the disappearance of heavy industry in Western Society, and the despairing effects it has on people whose life are being destroyed with it, the emergence of an original uncorrupted vision and the gradually corrupting effects of the taking of power within complex American conurbations, the potential of enlightened Education to change, or fail to change, underprivileged children almost on the toss of a coin, and the diminishing capability of the newspaper Media to mould and lead public opinion as they come under pressure from the presence of new forms of information dissemination.

Powerful stuff indeed, welded together by a near flawless cast, brilliantly realistic and unremittingly honest dialogue, fabulous photography, editing and cutting all combining with a beautifully paced way of telling the story. I found it quite spellbinding, and still think of it almost every day.

How to follow that? I’m in the middle of the "Sopranos", and it’s very good, but it’s not a match for McNulty and his colleagues. So perhaps a change of direction. Cue Christmas. Cue pressies.

I think I must be losing the odd marble or two, but I ended up with two Box Sets to watch – “Mad Men” and “Shaun the Sheep”. The Sublime and the Ridiculous you might think, although I’m not sure which is which yet. My current view is that it’s going to turn out to be The Sublime and The Sublime. I’ll hold fire on the adventures of our ovine friend until a later date, as I’ve only watched 16 of the (8 minute long) 42 episodes so far, although I have to report on an interim basis that I haven’t collapsed into fits of hysteria so much and so consistently for many a long year. And it’s supposed to be a Children’s programme! 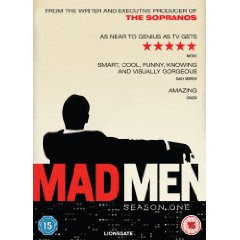 Back to “Mad Men”. HBO famously passed on it, and it ended up being produced by another American Studio – AMC. It’s a period drama set in the very early Sixties in a large American Advertising Agency on Madison Avenue (hence “Mad Men”). You are transported perfectly back to the age of Triple Martinis at work, colleagues who have at least two faces, a perfectly caught demonstration of casual sexism, pre Martin Luther King racism, a mind boggling amount of alcohol and cigarette smoking, and a macho-ness among the almost exclusively male elite in the organisation which is like an alien culture today. To think it was only two generations ago makes you realise just how frighteningly quickly the way of life can change - perhaps one of the reasons for the “They don’t know they’re born” attitudes of Grumpy Old Gits of my age.

The real irony of the whole production is that everything goes on with a security of belief in the way it is, which is unerring in the eyes of the protagonists. And yet, a couple of years hence their World is about to undergo a total seismic change in social attitudes. And we have the luxury of the hindsight which shows us these Ad Men, whose job it is to mould, change and manipulate the American Public in their chosen direction, being totally oblivious to the tornado which is about to hit them. As a clue, the closing credits to the last episode of Series 1 is Bob Dylan - "Don't think twice, It's alright". Just hum the words to yourself to get the drift.

It’s a series where nothing happens. Or at least, nothing seems to happen. Seen mainly through the eyes of Donald Draper, a Senior Ad Exec, we see the glossy Ad World colliding with family relationships where wives are almost fashion accessories, where business “relationships” between Secretaries and executives are acted out in a completely different universe from the home environment. Gradually in Series One, we start to see behind the slick Draper Business Persona, and glimpse what is washing around underneath.

It’s very underplayed, with a lovely feeling of the time. A huge effort has gone into the accuracy of the production values, and to very good effect but in the end, as always, it’s the people in it who grab your attention. The almost black and white stereotypes you are invited to observe gradually dissolve into a range of fragmented shades, and simplicity is slowly replaced by complexity.

I find it quite beguiling, and have devoured Series 1 in a bit of a rush. In our house, Father Christmas got his knickers in a bit of a twist when he wrapped my presents, and sent me two copies of Series One, when I remember quite distinctly asking him (very politely) for Series One and Series Two. But his franchisee (Amazon, I believe) is currently looking to find a spare reindeer to hot foot it through the snow send a replacement Series Two down my chimney.