I don't usually put up images taken by other people, but here I make an exception. I was going to say "it's an ill wind that blows nobody any good", but you might take that in bad taste, seeing as all the Airports in the UK are closed because of the fall-out.

But - The Volcano eruption in Iceland has resulted in a raft of pictures. I saw this one, and it blew me away (that's not particularly funny either). 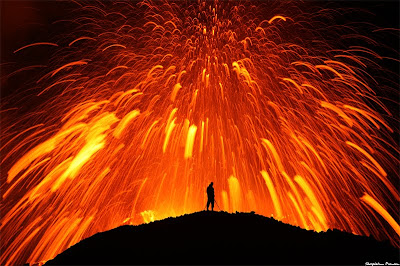 IF YOUR PICTURES AREN'T GOOD ENOUGH, YOU'RE NOT CLOSE ENOUGH -

It was taken by a guy named "skarpi" and can be found on Flickr. His title for it is "Playing with the Devil", which is a bit more eloquent than my version - see Blog Title.

Note - "Scarper" is a verb meaning "To Run like Hell away from where-ever you are".

It's an amazing image...