PETER GABRIEL - SCRATCH MY BACK

I've been a Peter Gabriel fan for a long time. For the last 30 odd years, he has been one of the most inventive, intelligent and thought provoking singer/songwriters around. Ever since his Genesis days in the mid 70s, when he would appear onstage wearing a fox's head or a sunflower, or a women's dress, the one thing you could say about him was that he was unpredictable, and you never knew what was coming next. His songwriting was always on the eccentric and somewhat bizarre side, but it was always interesting, absorbing – and different.

He has never been one to follow the crowd, thank goodness, and sitting back on his laurels is absolutely not his style. He hasn't produced a new body of work for something like 7 or 8 years, so it was with a fair amount of anticipation that I heard a new album was about to appear, and that he would be setting off on one of these “Saga” like tours they all seem to do when 60 is around the corner.

I had not bothered to read much about what was going to happen, so expectation hung heavy in the air with me. Mr Gabriel tends not to do the “more of the same” routine.

3 months ago, I got my ticket, and last Saturday, I dutifully set off to London for a day of "Kulchur". Firstly, a visit to Tate Modern on the South Bank, and then off to the O2 Arena in the old Millennium Dome to see "yer man" in the evening. I have to say that the O2 Arena is a terrific Concert Venue. It’s a marvelous looking building, especially when seen at dusk from the other side of the River. Its purity of line and simple but striking design mark it out as a real landmark construction. It’s a great pity that Politics almost managed to drag the building down with the ineptitude of what Our Leaders originally put inside it, but all’s well that end’s well. It’s very well set out, easy to get to, and seats huge numbers of people in pretty reasonable comfort. The acoustics of the place are also good, so, all in all, an excellent place. 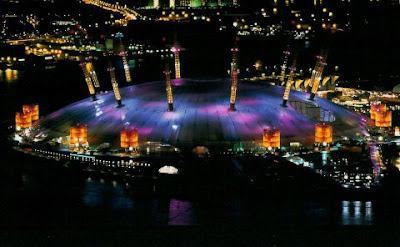 ARENA FROM ABOVE
Not my picture, I'm afraid. Author unknown. 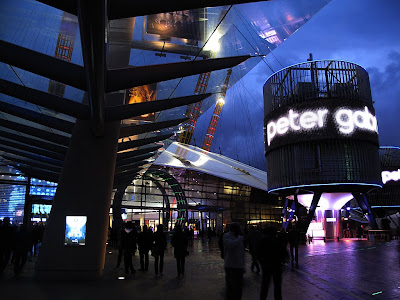 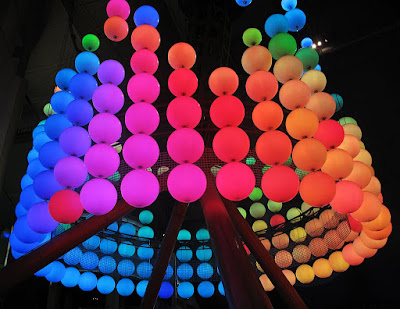 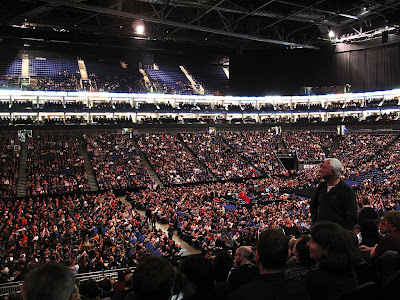 THE ARENA FILLING UP
The Tannoy system made a real point of emphasizing that he would be onstage at 7.30, so everyone found their seats in good time. There's always a real expectant buzz when 10,000 people sit there waiting for something like this. Of course, 7.30 came and - Nothing.

20 minutes later, a large 50 piece Orchestra had assembled behind a screen which cut off the main audience's view of the back of the stage. We were seated close to, but to one side of, the stage, so could see the magician's tricks going on behind the screen. Then, out he came, sidling onto the stage. He was dressed all in black, looking like a cross between a slightly portly Olden Day Sage, and a scruffy Undertaker’s Assistant. The days of the fancy dresses are clearly a lifetime ago. No matter. Here he is.

To me the show didn’t start well. He introduced a tall Scandinvian girl named Ane Brun who sang 3 very samey songs, accompanying herself on a guitar. The poor girl was on a hiding to nothing. The songs were unexceptional, and everyone was waiting for Peter Gabriel. The guy next to me summed it up with a comment “Now I know why the Norwegian Suicide rate is so high”. Not totally fair, but there you go.

Peter Gabriel’s new album is called “Scratch My Back”, and is a collection of 12 cover versions of other peoples’ songs. The plan is that they record one of Gabriel’s songs in return – presumably that will be called “And I’ll Scratch Yours”. We’ll see. Before tonight, I couldn’t imagine Peter Gabriel doing a cover version of anyone’s music. It just seems so alien to the man. He’s ploughed a very lonely furrow for the last 30 years, so for him to copy other people’s ideas seems quite strange.

The whole of the first half of the concert was given over to a performance of the 12 song project in its entirety. As soon as it started, the difference between the original songs and the versions we were hearing here seemed like a chasm. These weren’t cover versions, they were total reworks and reconstructions. No guitars, no drums, and a semi Classical orchestration of people like Bowie, Paul Simon, Lou Reed, Aerosmith and others was laid out in front of us. I’m not a pop music anorak, and many of the songs were new to me, but the ones that I did know came across as totally different in this performance, almost unrecognisable. 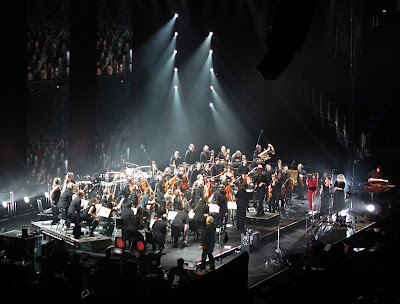 They were almost all slowed down dramatically, with the lyrics taking on a sparse character of voice, piano and strings. Even a song as bouncy as Paul Simon’s “Boy in the Bubble” was turned into a mournful, introspective contemplation. All the up beat rhythms, and the bright, bouncy tempo were discarded. And yet, if you read the words of the song, you could argue that this version was truer to the meaning of the lyrics. It's always good to hear a another view of any song, but this was from a different planet. 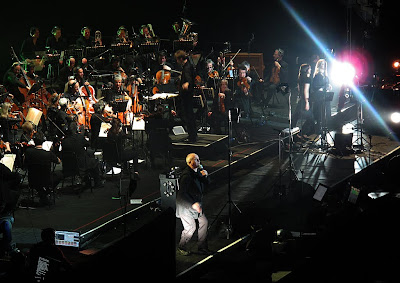 On the negative side, you could be forgiven for thinking the orchestrations were all a bit samey. Or that the tempo of the songs verged on the monotonous. There wasn’t a fast song in any of the 12, and the whole project took on an almost classical span, which clearly got some of the audience in a bit of a dilemma. The 3 minute Pop song this was not.

It demanded attention and concentration. Now I think Peter Gabriel has one of the most remarkable voices in music. He has such a purity of tone, overlaid with a husky edge which is quite distinctive and true. His top register is remarkable. What he gave us was the result of somebody paring down the original to an almost skeletal form, distilling down the essence of the song and reforming it in his own totally different view. In many places in the songs, he was almost talking melodically rather than singing the words, and you felt an almost intimacy coming over. And there were 22,999 other people in the Arena sharing this approach!

On several occasions, I wanted to rewind the performance, and get him to sing it again, because I’d failed to keep up with the message. There’s always the CD to do that with though.

The lighting effects were not spectacular in their scope. But, in some ways they matched the music. There was a backdrop of LED lights, and a perfectly synch-ed animation of red and white accompanied it all. No colour changes, nothing to distract, but gentle and beautiful animations which were very thoughtful, sympathetic and appropriate.

It was absolutely not one of those “Dancing in the Aisles” nights you sometimes get on the big venue, superstar nights. It was a thoughtful, contemplative couple of hours which stayed with me on the long journey home. Only for the last song of the whole evening, an orchestral reworking of “Solsbury Hill” did the audience jump up and get animated. “Here’s one you might know” was his telling introduction which said that he knew perfectly well what he was doing. I’m sure for some this was a bit of “Too little, too Late”, but with a guy like this, he leads and you decide if you want to follow.

I thought he produced some very haunting music, something I want to listen to again. It didn’t have an immediate “impact”, but you could feel it creeping up and engulfing you – something which would mature and burrow its way into your mind. I would imagine a Review of Reviews would result in a real polarization of opinion. Some would love it, some would hate it. No middle ground.