Just read this if you think that everything printed in a newspaper these days is "Gloom and Doom". 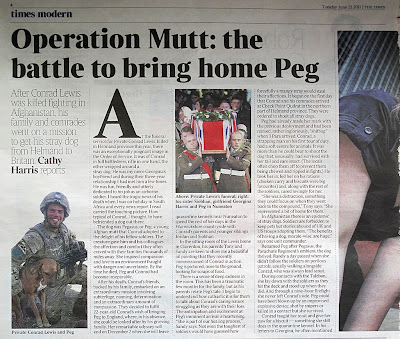 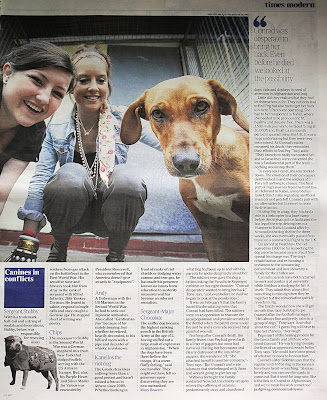 To read the story, click on each of the images above
to enlarge them in a separate window
The two pages are from The Times yesterday (21 June), and tell the story of a family's efforts to bring a stray dog from Afghanistan back to their home in the West Midlands. The dog had befriended (and/or been befriended by) a 22 year old soldier, Conrad Lewis, in Helmund. Earlier this year, Conrad was killed whilst on patrol out there, helping to make sure all of us in this country could sleep a little more safely at night.
I worked alongside Conrad's father for the best part of 10 years. He was Sales Director and I was Finance Director, and (apart from periods during Annual Budget times!) we worked together to help run a large vehicle manufacturing plant in Birmingham. The fact that our next smallest competitor was probably 100 times larger than we were meant that we had to punch way above our weight just to be in with a chance. Hence my particular interest in this story.
Conrad's funeral, in the main church in Warwick was the most memorable church service I've ever been to. It was attended by many hundreds of people, and you could be forgiven for thinking that it would have been a good day to invade this country, given the number of Army personnel of all ranks who were there. And if anyone ever says to me now that the young people of today are not what they were "in my day", I simply tell them that they should have been alongside me on that Friday.
That was three months ago, and yesterday the lovely story above appeared in the newspaper. Conrad's family had managed, by means only hinted at, to recover the 3 year old pooch, whose name was Peg, from the depths of Afghanistan, and it is now in quarantine in Nuneaton until December. We are a Grade 1 Dog family, and understand only too well the unique power of the bond which exists between dogs and humans. One can only imagine what Conrad's family must feel in these special circumstances. It must be almost like having a small piece of their son back with them.
I have to say that I can't remember reading a newspaper article which gave me as much pleasure, and which gave me such an uplifting feeling.
If when you read this, you feel the same, you can record your appreciation by giving a small donation to justgiving.com/conrad-lewis/.
If you're in any doubt, just think what Conrad Lewis gave.
tabs:
conrad lewis,
nowzad dogs
Posted by rogerc at 5:32 pm