It’s July, and my daughter has just read out my youngest Grandson’s first School Report.
Cue immensely proud Grandfather, Stage Left.
Coincidentally, yesterday I was rummaging around in my garage for some errant piece of paper, and I came across a small bundle of documents, contained within which were a couple of blue bound books emblazoned with the Bedford School Crest – my School Reports. 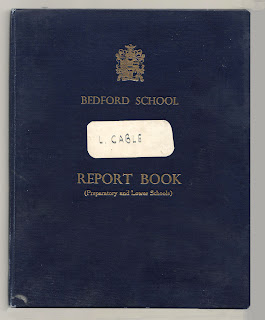 Ye Gods. Was I really ever 4 feet 10½ inches and 6 stones 8 lbs. Units and measures of a bygone age, which I even had to translate and explain to my children. Gone for ever it would seem are the days of the Rod, the Pole and the Perch.
But, just read the reports. The style is of another age. They were all written between around 1957 and 1964, and encapsulated the ways and the mores of that era. Now what follows may all end up sounding like a blend of “Outraged of Tunbridge Wells” and “They don’t know they’re born”, but the extracts are a clear example of how it was done by the Men in Gowns of Bedford School at that time.
The modern idiom of only praising the positives, and writing any withering criticism in a way that makes it look like a complement was something only invented much, much later. At that time, the schoolmaster wrote his report with a degree of individuality, saying exactly what he wanted to say, with an occasional wry piece of wit, and also the odd sardonic or even sarcastic jab at the poor recipient. You sensed that the School Report offered a rare opportunity to the teacher who often seemed to possess a barely suppressed desire to be a writer of some renown. Here, through the medium of the School Report, they could release a few of their choicer phrases onto the Great Unwashed. The current vogue for Political Correctness, and the construction of School Reports to parents from a Multi-Choice selection of bland, pre-determined and often meaningless sound-bites was most definitely a thing of the future.
The end result of all this was formally handed out at the end of each term in a sealed envelope to be taken home for review by one’s parents. Even 45 years after the event, the possibility that the Report may not have actually arrived home in the same envelope in which it was handed to me at school should probably remain shrouded in mystery. But as they say, Forewarned is Forearmed.
The school authorities however, on whom (to quote the late, great Henry Longhurst who attended the School for two terms in 1915) there were no flies at all, demanded that each term’s school report had to be signed and dated by the scholar’s guardian. This was presumably to confirm that they had read, learned and inwardly digested its contents, however indigestible they might have been. I’m not sure however if the idea that a parent’s signature could conceivably be forged had crossed the minds of the purer intellects which ran the school, a possibility which is now thankfully lost in the sands of time.
Just to show that, as one gets older, one develops a modicum of humility, as well as the ability to laugh at oneself, here are a couple of pages from my own reports. Schoolmasters then, like doctors seemed to revel in a writing style only just this side of incomprehensible, so there is a translation below. 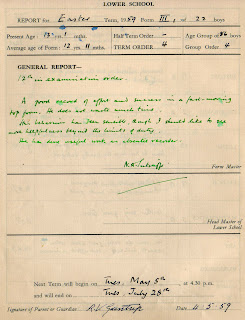 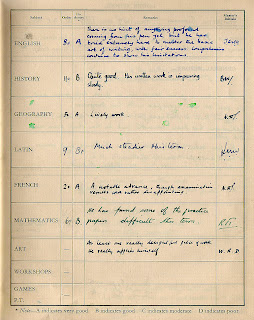 You may possibly gather that English was not one of my “star” subject.
Aged 11 years 9 months –
English - Good competent work. He can express himself clearly and shows interest, though I have yet to persuade him of the importance of the paragraph.
Rugger (note NOT Rugby!) – Not very outstanding, but quite useful. (Author’s Note. I was almost blind, and played without my specs. It was not much more than a 50/50 chance that I even played towards the correct goal-line. So I took this comment as a glowing tribute!)
Aged 12 years 8 months –
English – Much more effort was forthcoming in the last two fortnights after a miserable start but he finds advanced work very hard. His paragraphs have improved, but comprehension and paraphrase show him to lack perception.
Aged 13 years 1 month –
English - There is no hint of anything profound coming from his pen yet, but he has tried extremely hard to master the art of writing with fair success. Comprehension continues to show his limitations.
Aged 13 years 5 months –
English – He has not found it easy to write convincingly, although he has tried hard. He must try to expand his vocabulary, and be a little more realistic.
Geography – Sound knowledge. Appears interested. (Author’s Note - Appears?)
Mmmm.
Without wanting to blow my own trumpet above a sotto voce, my position in the School Year was 4th out of 86 boys, so I can’t imagine what the poor soul who came 82nd must have been faced with when Pater opened the envelope at the end of term. It would be interesting to find out.
I assumed that the above extracts were the ways of a peculiarly “Bedford” approach to these things, but this would seem not to be the case. A while back, I came across a little book, cleverly entitled “Could do Better” (by Catherine Hurley) which captured some School Reports from the Great and the Good. To my slightly warped sense of Humour, they seemed very funny and left me with a feeling that I wasn’t the only one in the world to be have been slightly singed by the Schoolmaster’s delicately acid wit. Try these for size.
Richard Briers (The Good Life) - "It would seem that Briers thinks he is running the school and not me. If this attitude persists, one of us will have to leave,"
Dame Judi Dench (National Treasure) - "Judi would be a very good pupil if she lived in this world."
Peter Ustinov – (Wit, and general Good Egg) - "great originality which must be curbed at all costs"
Sir Michael Heseltine (Tarzan) – “rebellious, objectionable, idle, imbecilic, inefficient, antagonising, untidy, lunatic, albino, conceited, inflated, impertinent, underhand, lazy and smug”. (Author’s note – Come on, get off the fence and tell us what you really think!)
Alan Coren (Journalist and Broadcaster) – “Coren's grasp of elementary dynamics is truly astonishing. Had he lived in an earlier eon, I have little doubt but that the wheel would now be square and the principle of the lever just one more of man's impossible dreams.”
Sir Norman Wisdom (Actor) – “The boy is every inch a fool but luckily for him he's not very tall.”
Stephen Fry - "He has glaring faults and they have certainly glared at us this term."
So, make of that lot what you will. It’s probably just a sign of the times, but something tells me that it will not be quite so entertaining to read a collection of such extracts in 2050. Unless of course, the spirit of such teachers lives on in some schools today. Who knows?
I’ve shown you mine, so now you show me yours!
Posted by rogerc at 9:56 pm

Every person has the passion in any aspects or things. If you love something and
it came in front of you it completes your day and your mood turns into something
you won't expected. I love your work and I want to read more about it. Visit my site
if you have time . Thank you.