THOSE MAGNIFICENT MEN IN THEIR FLYING MACHINES

Note - Double click on the individual pictures to enlarge
them in a new window
My journey into the world of British Industry started in 1964 when 12 of us started hammering and filing lumps of metal in the Apprentice Training School of the British Aircraft Corporation (now BAe) in Weybridge Surrey.
Today, 47 years on, we have a reunion once a year to chew over how we all are, what we’ve been doing, what we can’t do anymore and generally look happily backwards over a decent meal and a not inconsiderable number of drinks. We discuss our bodies and our minds to compare notes as to those parts we can’t see anymore, what’s not working as well as it used to, what has become atrophied and those bits which may have finally fallen off completely. All in all, given such a morbid agenda, it's probably a surprise that it’s actually an event we all look forward to.
This year’s bash was held in Bedford, with the intention of eating and drinking our way through Friday evening (and significantly into early Saturday morning for a couple of the hardier and less wussy members) and then spending Saturday at some vaguely Aeronautical event. This year, we went to the Shuttleworth Collection in a delightful village called Old Warden in rural Bedfordshire. This looked like a pretty decent Museum of old aeroplanes, and the plan there was that the day would finish with a flying display on the airfield next to the museum.
Waking up early on Saturday, the view out of my bedroom window was seriously unpromising. Wind and rain lashing down. The prospect of standing out in the middle of an open field in such weather was not one I even began to relish. But, optimism is all, and we finally set off in a rather shambolic convoy to Old Warden.
Our arrival was met with an encouraging improvement in the weather, and we spent a good few hours wandering around the eight or so hangars which housed the collection. I had been born in Bedford, even going to School with the son of the man who ran the collection in the Sixties, so I had been there before, but I was not expecting what I saw today. The collection had been significantly added to and was now huge, totalling around 100 aeroplanes, most of which were either in flying condition, or were being restored to a condition where they would be able to fly in the future.
They were really beautiful to look at, most of them from the 1920s, 30s and 40s. There was a decent section of really ancient and historic planes, and one of the prize exhibits was the oldest aeroplane in the world which was still flying – a 1909 Bleriot. A seriously important piece of history out here in the middle of nowhere. 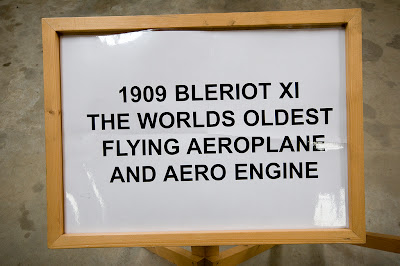 Even the lunch there was a step up from what is normally on offer in such places, and I had a slice of Pear Charlotte which was absolutely scrummy. By mid afternoon, the weather had really started to clear up, and the clouds turned into those lovely white, fluffy jobs which enhance anyone’s outdoor picture taking. We all progressively took off the various layers of protective clothing we’d come in, and in the late afternoon sun, albeit with a bit too much wind, the flying display got under way.
For two hours or so, about 20 of the Collection’s planes took off, buzzed around, and did a few aerobatics and stunts like cutting ribbons held across the runway in front of us. It was absolutely delightful. The result of the wind was that a few of the older aeroplanes were unable to fly because they were in danger of turning over on the ground, but if there’s a better place to see the foundation of this country’s place in the development of the Aeroplane, then I don’t know where it is.
Because the planes were not as fast as those of today, they spent far more time in front of the crowd than a jet doing 500mph or so. One of them could only just fly faster than the wind, so in one direction, it almost hovered in front of you as it passed, and as it climbed it looked almost as if it was ascending like a balloon.
The light was perfect for such an event, with a deep blue sky, lovely cloud formations and occasionally a long raking sun picking out the planes very dramatically under a darker grey background. Wonderful conditions for photography. With little or no commercialism there, the overall atmosphere was like going back 30 or 40 years. Totally professional with everyone seeming to know exactly what they wee doing, and yet the feel was of a very slick and well run County Show.
Very highly recommended.
They put on displays throughout the year, the next one being on 7th August. Their website is here -

http://www.shuttleworth.org/tickets/event-details.asp?ID=111.
Here are a few more of the pictures I took of the planes on display.