TOP OF THE POPPETS 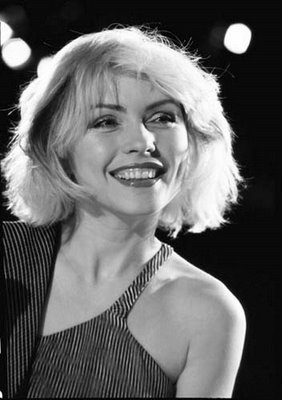 Fan worship, if we are grown-up about it (and we are all grown-up about it, aren’t we?) is not very logical. But then, I suspect it’s not meant to be. You’re actually responding to a myth or someone’s manufactured image rather than to a real individual, and that’s asking for trouble. So we don’t do it.

However, we’re talking about the heart here, and not the head, and there are always a few exceptions to every rule. This short piece is about one of them pictured above – one Deborah Ann Harry, aka Debbie, aka Blondie.

For those of us “of a certain age”, that’s between 50 and 60 as I write, Debbie Harry was quite simply IT.

Around the early 70’s, every adolescent had at least one picture of her on their Bedroom wall. If the academic researchers ever start to look for a reason why there is a blip in the occurrence of Early Onset Short-Sightedness among Middle Aged Males in the Western World, it will not take them long to work out the underlying cause.

Deborahitis, it will be dubbed – with extremely good reason. She was outrageously attractive, and (before the word had even been invented) – the utter epitome of COOL.

The good lady is now over 60, and watching recently (just out of academic interest, of course) a film about the band, she still has something about her which keeps you riveted to the screen.

She had an unusual upbringing, which, without a doubt, goes some way to explain why she is like she is. Adopted at an early age, and living in the suburbs not too far away from New York, she was attracted to the bright lights, and would take the Subway into the city each week-end. Apparently for a time, she went through a phase of really believing that Marilyn Monroe was her mother.

By her own admission, at a very early age, she really got her own share of the bright light lifestyle – Vocalist, Waitress, Bunny girl – get the picture? Almost inevitably, she ended up in the New York music scene, just when the punk scene was taking off there. After a couple of false starts, she met Chris Stein, and over a short period they clicked, and together with a couple of other guys Blondie was formed.

Now, you can argue that no Pop Group will ever plumb the ultimate depths of human emotion, but that’s not the issue here – Pop music is about excitement, insanely loud and addictive upfront sounds, glamour, the “Sex, Drugs and Rock’n’Roll” thing and generally being something your parents, usually tutting, look disapprovingly over their spectacles at. Rule 1 of Pop Music is that your parents mustn’t like it.

So, with Blondie, trailing a whole stream of these “unacceptable” attributes along with them, the stage was well and truly set for them to be another budding band. Except, however, that this band was fronted by a stunning looking girl rather than some Neanderthal Missing Link Male figure. Her super-cool attitude and upfront streetwise style set her way apart from anyone else singing at the time. Immediately 50% of the population, strangely all male, become instant admirers. And oddly, the band was also accepted by the young female set as well. Instant popularity – very simple!

As a band, they were not on the intellectual wing of the Rock Band spectrum, although there is a thread of irony, strange for an American band, running through their lyrics.

If you look at their output, they tended to follow trends rather than forge new ones. But they did it bloody well. With a lot of help along the way from a far sighted Sound Engineer, Mike Chapman, they started off in Punk, graduated (or defected as some Punk die-hards saw it) to Disco when that came on the scene, and ended up in the latter part of Phase 1 of their life, heading towards Rap.

What they did extremely well was to write and perform outrageously catchy Pop Songs which, for more than two decades, caught the fleeting moment and feel of the times superbly. Without getting anywhere near to putting my anorak on, they are without doubt the best band fronted by a girl EVER – 6 Number 1 Hits, the first in 1977 and the most recent in 1999, 30 million records sold and so on …..

If you trawl through the band’s personnel history, you start to get a flavour of the delicious internecine fighting, rivalries, battles (both drug and legal) that went on not just below the surface, but all around them. The list of band members is quite long, with frequent comings and goings of bass players, drummers etc. Their one time manager, for instance, who on the one hand could be seen as a real key driver creating the group’s changing style, seems (at least if you listen to the good lady herself) to have taken most of the money they had earned previously, and the future as well, leaving the band’s members hugely in debt. They needed to keep on playing into their 60’s just to get their finances back into the black. But that’s Pop Music, isn’t it?

One thing which does shine out quite virtuously, in a business where Mother Theresa type moral attitudes are a bit rare, is Debbie Harry’s reaction when Chris Stein became very ill. Over a long period, you could be forgiven for thinking that here was another victim of the dreaded white powder, as you watched him physically wasting away. In fact he was suffering from Pemphigus, a rare form of auto immune disease.

Although their powers were by then, a bit on the wane, they were still Division 1 material, but she in effect gave up singing to nurse him through what was to come. They all thought he was going to die, but over a period of 5 years or so, he slowly recovered.

“Time and tide” played its inevitable part, and when they were all back on the rails, the Pop Train was several stations up the line, and they had to play catch up. This left them as a less global presence on the Music scene, but still a great band. She still managed (pass me that anorak again, will you?) to grab another record in 1999 which she still holds, by becoming the oldest female, at 53, to release a UK No.1 record – and that was when No. 1’s still meant something!
So there we are. The brighter ones among you will see a slight buzz of adolescent Pop fan in me coming out here. It’s not normal for me – my usual Pop fare is more Dinosaur waddling along the white line in the exact middle of the road – Pink Floyd, Genesis, Dire Straits (he says in a whisper).
But when I compile (and those who know me will possibly recognise a history of compilation!) the list of my personal 8 Pop Records to go with me to my Desert Island, Debbie Harry and Blondie are near the top. With her heavily backlit blonde hair (or most of it blonde at least!) wafting around, her long legs seemingly stretching way above the top of her head, her beautifully featured face, and the lady herself languorously, but O so Coooolly, blasting out “Heart of Glass” with its gnawingly addictive disco beat - her position in my Top 8 has never been in the slightest doubt.
Posted by rogerc at 10:09 pm

And now for a brief selection of spellings which I enjoyed:

We're all tinged with imperfecshun.
Suggest we corl a troose.
Hope kippers were OK.

You missed one instance of "adolsecent". It's still there.