RAGE AGAINST THE MACHINE No. 2 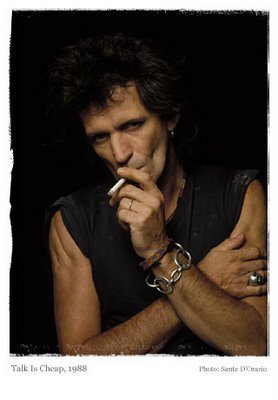 The saga of Mel Smith’s “Will he, Won’t he” (in the end, he didn’t!) light up the infidel weed in a Scottish public place, to whit one theatre, steps up a level. It’s now getting serious.

The Match – Smoking in a Public Space – since March 2006, a new deadly offence in nicotine teetotal Scotland.

The Rolling Stones, in the middle of a world tour, played Hampden Park last Friday night. Allegedly, Keef “appeared” to light up, AND SMOKE, a cigarette on stage during the performance, an offence for which he can now be fined up to £50.

The Chief Executive of Action on Smoking and Health Scotland, one Maureen Moore, said “If Mr Richards has broken the law, he has to pay the penalty like anyone else.” Note it’s “Mr Richards”, not “Keith” - clearly a common criminal! I don’t know why, but something tells me going out for a beer with Ms Moore wouldn’t be a bundle of laughs.

This crime, for that is what it would be, was reported to the evangelists of the local authority, who issued a statement saying “This has been brought to our attention and we will be looking into it.” Cripes!

I simply can't imagine there is any doubt as to whether Keef lit up - of course he did. That's not the issue - what we don't know is whether he did it to wave two fingers at the local council, or he genuinely hadn't boned up on the latest Scottish law, or even, he was under the influence of something far more effective than a Marlboro Lite, and had absolutely no idea of what he was doing.

You choose, but I know where my money's going.

You can just imagine the massed troops of the Glasgow City Environmentalists meeting last Friday night deciding to go to Hampden Park and stop Mr Richards in the act, or to close the offending venue in the middle of the concert. The vision of assorted Council Jobsworths stumbling off stage later that evening, each with a Fender Stratocaster protruding from one of their bodily orifices at least offers a bit of light relief in this farce.

I Can’t get No Satisfaction? – Oh, I think you could.

Who’s next? Perhaps what should happen is that a renegade Scottish MP should, having formally alerted the Massed Pipers of the Tobacco Stormtroopers, light up in the Scottish Parliament and refuse to pay the fine. We could then enjoy the sight of the whole of the Scottish Political system being closed down.

It appears the the definition of enclosed public space is open to interpretation.

Do we smell a whiff of "chickening out" here? Excellent.