DON'T MENTION THE WAR ... I THINK I GOT AWAY WITH IT ALL RIGHT.

“Every morning I get up, I read the obituary page. If my name’s not there, I shave.”

It must be my age, but I love reading obituaries – they often contain some of the most elegant writing to be had in a newspaper. Often full of wit, mirth, sardonic understatement and barely disguised innuendo, they also draw you attention to the lives of people who can intrigue you, mystify you and often amaze you.

By custom always anonymous, the ones I like the best are in the “Telegraph”. Yesterday was no exception. One was on John Gardiner, probably the best restorer of old racing cars in the world. A man who, literally, without whom, Vintage Car racing today would not be possible. Together with Dick Crosthwaite, he founded Crosthwaite & Gardiner (C&G), a vehicle restoration company which on its own demonstrates that this country can still produce true champions in the field of Engineering.

Just look at their website, www.crosthwaiteandgardiner.com and see what they’ve achieved.

John was in his mid 60s, and by all accounts a tad prickly, sounding as if fools were people he did not suffer gladly. He was clearly an utter engineering perfectionist, totally tuned into avoiding the fine line of prissy over-restoration, but getting it back as the original would have been, however that needed to be done.

A small sample of yesterday’s piece –

"After C&G had restored and prepared an original pre-war Auto Union Grand Prix car, Crosthwaite talked Audi into funding production of perfect running replicas of these complex machines. Gardiner master-minded the project, and visiting Audi engineers were astonished to find him working from a modest farm at Buxted, Sussex.

When Audi insisted on manufacturing the V16-cylinder engine crankshaft for these cars, it failed Gardiner's rigorous inspection; and when an Audi committee quibbled endlessly over technical details Gardiner told them: "Listen, all you've got to do is sign the cheques and tell us how big you want the swastikas painted."

It may not be quite the same car, but to get an idea what these guys created in their “modest farm”, look at this picture I took at Goodwood this year. This is one very serious motor car – way over 500 HP, and built originally in the mid 30s. 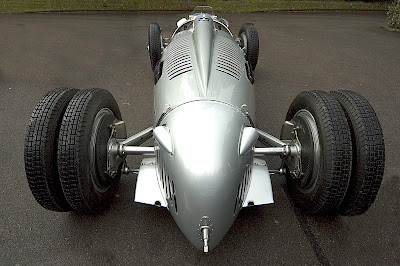 NOW THIS IS A RACING CAR

The quality of their work, to use a much overused word, but one which is absolutely applicable here, is awesome.

As far as the obituary is concerned, you get a really clear picture of your man in a very few paragraphs, and you can't ask any more than that. I don't know why they are all anonymous, and I don't know who decides, in a newspaper, that J Bloggs is worthy of a few paragraphs, or not. There must also be a covert army of people writing these things, and slyly updating them when some worthwhile misdemeanor befalls their subject. A whole world about which, to extend the Fawlty Towers reference, "I know nooo-thing".

The "Telegraph", actually I think it's Pan, have published a series of collections of them, including a good one on Rogues, which will have you chuckling, and a quite sobering one on Military people which will have you wondering very seriously what this country is coming to. If you're the sort of person with a library in the loo, these books, for their content, and very apposite story length, rather than their absorbent properties, are a great buy.