THE MEANING OF SPROT - 2

And now for The Whinge.

I’m sure it’s not just me, but is Proof-reading becoming a lost art? I don’t know if I’m becoming more attentive to the actual words I read in a book, or that the people who proof read, or are being paid to proof read, author’s books are getting less good at what they are supposed to do.

Anyway, and this is going to sound really mealy-mouthed and Meldrewish, I seem to find an increasing stream of spelling and typographical errors in the books I read. The more recent the book, the more chance there seems to be of sloppy spelling.

It doesn’t normally get in the way, apart from the occasional feeling akin to a fly landing on your arm when you’re reading something. Your attention is diverted for a second, you “tut”, even though you are alone in the room, you recover concentration, and move on. But it is still an unnecessary irritant.

Maybe, it’s a bit like buying a new Red Fiat – you suddenly see thousands of red Fiats on the road. Once you realise that books contain mistakes, when previously you thought differently, your mind is henceforth “switched to receive”. Perhaps they’ve actually been there all the time, but something now alerts you to noticing these mistakes, and they tap on your mind.

I seem to recall an article by Doris Lessing a few years ago, bemoaning this, where she puts it down to the wholesale change in the type of people undertaking this sort of task. A couple of decades ago, it was an elderly, probably wizened, person, whose knowledge was almost encyclopaedic and past whom nothing got. They could spell for Britain, they knew all the arcane references, and had a breadth of knowledge upon which an author could rely totally.

Nowadays, she argued, the job is given to a bright young thing, 22 or 23 years old, straight from University, whose level of general knowledge is still, shall we say, maturing, and whose spelling has flowered under the somewhat more relaxed regimes of recent Government’s Educational policies.

And, it shows, and not just in the more trivial, “less important” books. It actually hit me first when reading Roy Jenkins’s Biography of Churchill. Even in such a “Division One” Book as that, I noticed a few spelling howlers – only around three, but you felt as if you’d spotted a mistake in the King James Bible. Since then, mind alerted, it seems to have become a Twenty First Century fact of Life.

The last book I’ve completed was Simon Barnes’s excellent “The Meaning of Sport” – a truly wonderful piece of work. The scribble previous to this extols the book’s virtues, and I have deliberately kept this small point away from it, by writing about the sloppy proof-reading separately. The book is too good to be contaminated by an anorak’s spelling niggles. But they are still there, and in profusion.

About a third of the way through, I felt this “itch” about the pattern of mistakes, so I decided to keep a bit of a score. The book was far too absorbing to do this accurately, but whenever I came across something that I felt was not right, I put a marker in the page.

Just look at the picture below – there are twelve items which I, very much in a non proof-reading mode, came across. I suspect there are several more. 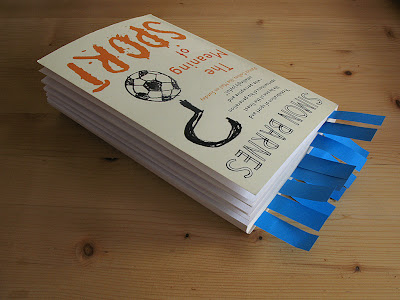 SOMEONE'S BEEN PAID TO ELIMINATE THAT LOT

Does it matter? No, and Yes.

The book is a marvellous read. Full stop. New paragraph.

But if these issues move a reader to be even slightly diverted from the writer’s intended course, then that’s contrary to the author’s aim. Did it stop me thinking that the book was out of the top drawer – No.

But it did irritate me enough for me to get a pile of little blue stickers out of a drawer and put them in each imperfect page, and I’m absolutely sure that was not what Mr Barnes wanted, or set out to achieve.