I’ve been sorting through some old pictures, and came across a few that caught my eye. Most are family images, but some may be of interest to a wider audience.

I’ve had a camera since the Year Dot, and started by playing around in the 1960s when I was Secretary of the School Photographic Society. One of our Wizzard Wheezes, which today would probably come under the business category of “Cost Saving Strategies” except I don’t suppose today’s National Curriculum includes a section on this, came out of our “A” level Chemistry Course. We somehow got hold of the list of chemical constituents that would allow us to process Colour slide film at home or in the Chemistry Lab. So we dutifully went through the “Eye of Newt, and Toe of Frog” bit, and lo and behold, we became proficient at processing slide films for about Ninepence each.

It’s easy to forget today just how far we’ve come with Technological matters since that time, and how Sci-Fi advanced it all seemed when we saw America’s “Put it all on Red” approach to landing a man on the Moon. Watching some of the heartbreaking failures, the fairytale journey of Apollo 8 around the moon one Christmas, and finally in 1969, Apollo 11 setting off in July with Neil Armstrong, Buzz Aldrin and Michael Collins aboard to create a bit of history that was probably the most important achievement that Man has made in my lifetime. I suspect most people won’t agree with that, but I don’t really mind.

Sitting there watching it all happen, in real time, was just so thrilling. We all learnt to love the fabulous intro to Strauss’s Zarathustra Tone Poem, and was there ever a piece of music more suited to such an epic voyage. You simply didn’t know what was going to happen, and it felt just like a Boy’s Own Story playing out in front of you.

Watching on our State of the Art Black and White TV, we almost prayed as Armstrong and Aldrin landed, walked and bounced around a bit, got back in the ludicrously shaped Lunar Module – inevitably called the LEM, and on the absurdly simple TV camera they left on the Moon’s surface to record their (hopeful) departure, we watched it blast off. 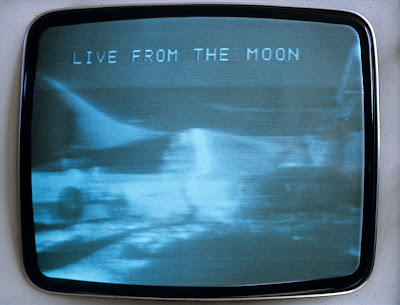 PURE WHITE TVs WERE THE IN THING IN THE 60s - I'VE CROPPED OUT THE LAVA LAMP!
You only got one swing at that ball, so I took a picture of the TV screen at 17.54 Coordinated Universal Time (UTC) on 21st July 1969. There were no Video recorders then. TV was a transitory phenomenon, and I wanted this one to keep. The picture is awful, but the words “Live from the Moon” had never been seen by Man before.

...love reading your blog site- so thanks much!
Your image off a TV is of a later Apollo flight (...looks like Apollo 15 at the Hadley Appenines [in the b/g])- not of Apollo 11. Also you state you watched the Lunar Module lift off via the camera left by Apollo 11. No such thing occurred- the only 3 lift offs returned from any of the 6 manned landings were the final 3 Apollo landings- 15, 16 and 17. The Lunar Rover (which were only carried on those missions) had Color TV cameras that witnessed the ascent of the LM ascent stages (in fact Apollo 15's camera on it's pan tilt unit hung up so we viewers back on earth saw it leave the frame, while Apollo 16 & 17 had fully functioning pan tilt units that tracked the ascents until out of range (and frame). If you saw an ascent for Apollo 11 it was a simulation from a TV studio covering the mission (all 3 of the major news coverages here in the US- ABC, CBS, NBC did simulations).