It’s so easy to get dispirited by what you read in the newspapers - the unending saga of the unravelling of Gordon Brown (didn’t Blair SO get his timing right?), the whole economic situation, the impending demise of the planet due to my inability to remember, when in a supermarket, to use the plastic bags I’ve once again left in the car, Andrew Flintoff getting out twice in five balls the other day (although I bet they pick him for the Test next week), and we’ve now got to endure Cherie Blair’s memoirs being remorselessly serialised all next week in the Times.

It’s easy to get really wound up about all these things, and wonder where the world’s going. Except, I’ve just come back from a short trip into Holt in Norfolk, and driven through one of those things which seriously makes you glad to be alive – the next village from where we are staying, is putting on - you'd better believe it - a Scarecrow Festival.

Outside the houses, the pubs, and the guest houses, life size scarecrows have been planted – at least I’m assuming they didn’t get there on their own. Who knows – we are in a very rural part of the country – it could be Norfolk’s answer to the “Wicker Man”.

They (the scarecrows) are sailing on the village pond, chatting over the garden wall, mending their cars (as one does) and generally loafing around doing not a lot - apart from presumably Scaring a few Crows. They look brilliantly zany, and are just what England needs just at the moment – a touch of utterly pointless, but charming, silliness.

In typically English fashion, you watch a good proportion of the tourists driving through the village, eyes facing forward, and completely missing the whole thing. Quite odd. They don’t know what they’re missing.

I’ve put a few pictures below, and there’s more, which I’ll include in Episode 2 in a couple of days. 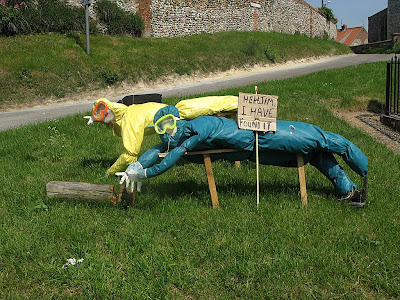 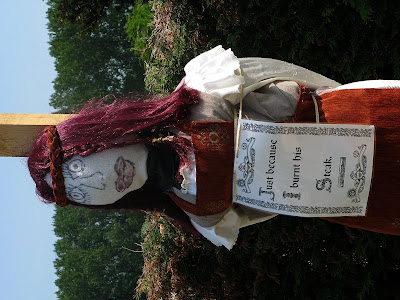 JUST BECAUSE I BURNT HIS STEAK - NORFOLK HUMOUR 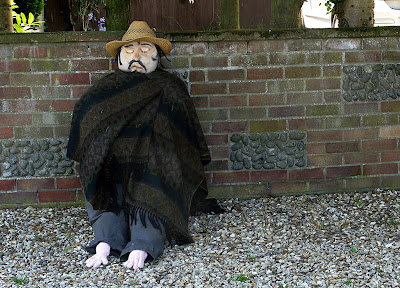 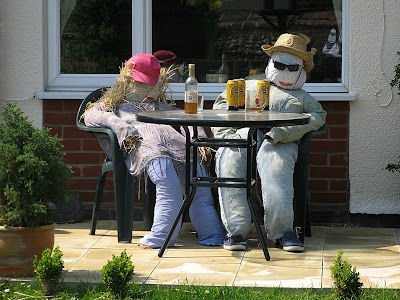 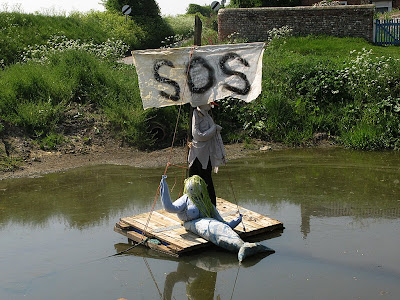 ON THE VILLAGE POND 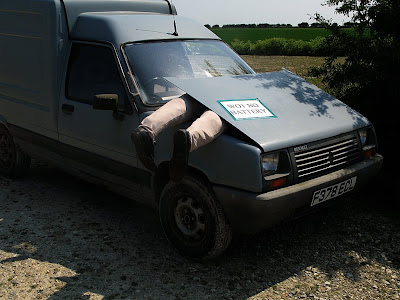 ON THE BONNET IT SAYS - "WOT, NO BATTERY! 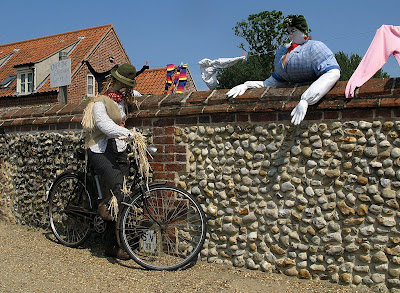 OVER THE GARDEN WALL - THE SPITTING IMAGE OF LES DAWSON! 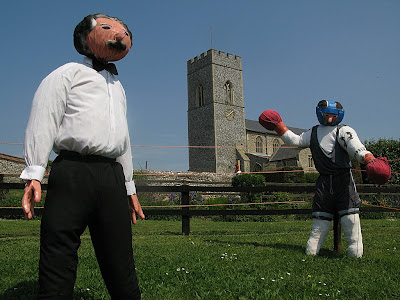 BOXER AND REFEREE IN FRONT OF THE LOCAL CHURCH
- NORFOLK SURREALISM AT WORK
You’d never get this in Manhattan! It makes you proud to be English.