It would be fair to say that I'm not the greatest fan of "Toys Я Us".

I suppose you could say we get not only the Government but the Toy Shops we deserve, and it's really all our own fault. But, ignoring the Government (which is actually quite a good idea in this country, at the moment) for the purposes of this short note, places like Toys Я Us do seem to exploit their position in the way they contribute to the development of the minds of the nation's offspring, and the way they are taught to play.

I'm no statistician, and having visited the place on no more than 6 occasions in my entire life, I can say with absolute certainty that my own views do not form a meaningful sample. But, the impression I have from these 6 visits is that, for all the girls in the world, the only colour existing today in the inhabited Toy Universe is PINK. Not pink, but that PINK which only exists inside the cores of ill-maintained Russian Nuclear Reactors. And is it me or do all the boy's toys on sale aim to progress the destruction of as much of the Human population as quickly as possible?

I am prepared to admit to a soupçon (I've just spent a few days in la Belle France, hence the cedilla) of bias here, but I have to say I find the whole toy shopping experience hugely depressing in such places. My personal "6 visit poll" has found the staff unhelpful and uninterested. And no-one in there seems to smile, an odd situation for a toy shop, where I'd have thought pleasure was one of the main aims of the game. 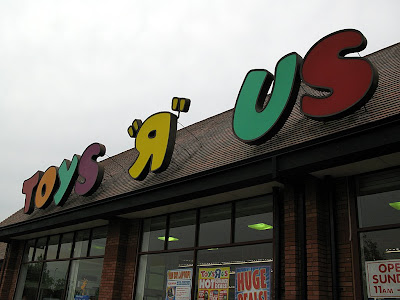 Even the name irritates me – the nation's ability to spell is under enough threat already without a responsible retailer calling itself something that reads as if they are teaching us the basics of Cyrillic Texting. Perhaps I've missed the plot completely, and it's actually educational, but I don't think so.

Anyway, just to support my point, here is a picture taken outside one of their stores the other day. It purports to explain their Opening Hours to the public at large. 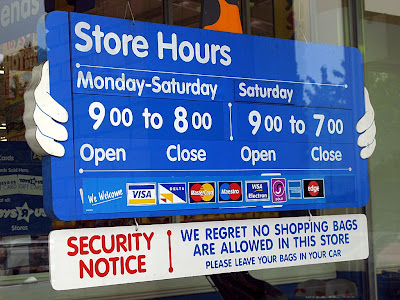 If it makes sense to you, you're a better man than me. Or again, maybe, it's an early adoption of some new EEC based Flexible Working Initiative.