IT'S DEJA VU ALL OVER AGAIN

“May you live in interesting times” is reputedly an old Chinese proverb, although the pundits don’t seem to be able to decide if it’s meant to be a blessing or a curse. With all the fun and games going on in Wall Street and the financial capitals around the world, I suspect that they’d probably come down on the curse side of things at present.

My opinion of what’s going on and what to do about it is quite worthless, unless the Government asks me to vote. Then I’ll have my say.

I was really struck though by the front page of today’s “Times”. A very moody, dark and threatening picture of Capitol Hill was spread across all 5 columns of the paper, under the headline “The Eye of the Storm”. The image was taken by J Scott Applewhite, and what a super image it is. Talk about a picture speaking a thousand words - well picked Mr Picture Editor. 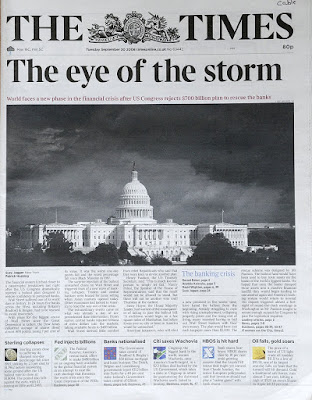 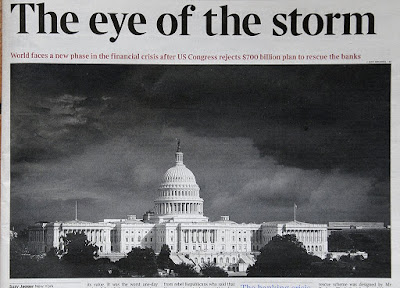 CAPITOL HILL - J SCOTT APPLEWHITE 2008
The way pictures illuminate the news of the day has always fascinated me, and my mind went straight to another picture which ended up having a real effect on the Second World War. It was taken in 1940 by a remarkable photographer named George Rodger. Rodger was an outstanding British War Photographer who, among other things was the first person with a camera into Belsen when it was liberated.

Along with Cartier-Bresson, Robert Capa and Chim Seymour, he was one of the four founder members of the Magnum Agency, simply the most important Photographic Agency the world has ever known. Just Google them and be impressed at what you see. He was seriously good at what he did, but the effect of what he saw in Belsen overwhelmed him and he changed track completely and went off to take some remarkable images of the tribes in Sudan and other parts of Africa. 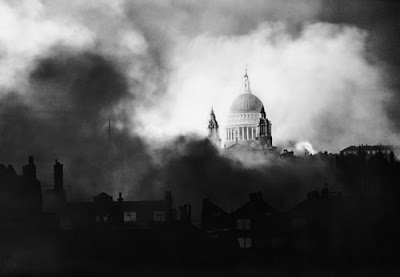 ST PAULS CATHEDRAL - GEORGE RODGER 1940
His image of St Pauls Cathedral, taken during the Blitz in 1940 is an absolute stunner and one of the true iconic images of the Twentieth Century, not just for what it is, but also for what it represents. The “We will pull through” feeling, the utter simple, resolute, permanance of the dome surrounded by the dark uncertainty which is the rest of the picture summarises perfectly where Britain was at that moment. A visual version of Churchill’s greatest speeches.

I don’t know if the similarity is intentional, but by God, it struck a chord in me this morning.
Tags:
george rodger,
st pauls cathedral,
capitol hill
Posted by rogerc at 2:40 pm