A few post ago, I showed some pictures of the unintended first flight of a new Airbus A340 airliner – Look up “Oh Dear” on August 14th.

The frailties of man in an increasingly complex world are always worth a second look – to me at least. We sometimes do the oddest things, particularly when technology is concerned. It's just the juxtaposition of the stupifyingly complicated and the utterly stupid that appeals to me. The humour (black though it may be) is caused by the fact that the result that plays out before you was, never in a Million Years, in the minds of the poor souls involved in it. If it was, it wouldn’t be funny.

There’s nothing remotely funny about someone taking a $200 million aeroplane and trashing it before it ever had the chance to fly – except that I found it hysterical.

Rather depressingly, I had an anonymous comment from a gentleman called Shane who wondered, presumably because I had mentioned that the aircrew were Arabs, whether I was actually setting up a “sinister racist plot” against Arab people.

For the avoidance of any doubt, the answer is -

I like to think of myself as a relatively simple soul – not too many hang-ups, just writing for pleasure about things that fascinate me, excite me, amaze me, irritate me and often just amuse me. I may not be a good writer, I may Bore for Britain, I may have a sense of humour that leaves you cold, I may be a rubbishy photographer, I may just be a dreary old git sitting in front of a computer wasting his time, but I don't think I'm a racist.

If the aircrew had been Norwegian, then the first line of the post would have been “I don’t know the Norwegian equivalent of “Schadenfreude”, but after seeing this, they sure need one.” The same one word change if they’d been Venezuelan, or Hungarian. The only one exception to this rule would have been if the crew had been German.

But they weren’t, so I was alright.

So Shane, just for you, this next photograph is absolutely not meant as any form of racist comment. It’s just a photograph I took the other day at Telford Railway Station which amused me (the photograph that is - Telford Railway Station is not a laughing matter). For those of you who want a clue, the original notice was meant to say “Trains to Shrewsbury”, but clearly someone in the town had just bought a new wallpaper scraper and wanted to get some practice in with it before his train arrived. 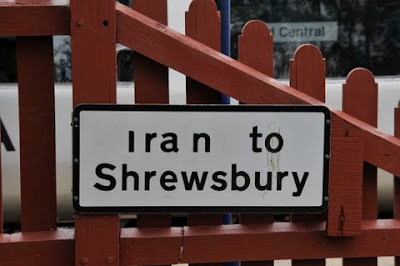 Here in Canada, we pose the riddle "why don't the English make computers?" The punchline is: "because they can't find a way to make them leak oil..."

We mock the french, pretentious Paris, Airbus... We shake our heads at the stereotypical "ugly American" and his jingoistic war machine. We criticize the Italians for mistresses and needlessly complicated engineering, we even try to laugh at ourselves and our "holier-than-thou" attitude.

One can poke fun at collective groups without being a racist, sexist or xenophobe. The whole political correct movement has gone much to far and society needs to be more thick skinned and less picayune.

And you, sir, write very well- with an approach that is thankfully a notch or two above the typical blogger fare.