I was listening to "The News Quiz" on Radio 4 a night or so ago, and the excellent Jeremy Hardy said something which answered a little issue which had been niggling me on and off.

A couple of posts ago, I scribbled down a few Home Thoughts from Abroad about the adequacy or inadequacy of our Prime Minister. The unsaid thing for the Labour Party today is that – if not him, then who?

Enter Stage Left, the Boy Milibrand. In an attempt to out-youth Dave, they’ve come up with somebody who to me seems still to be in the throes of early puberty. How can someone like that possibly have the experience to lead this (or any other) country forward. Now I know that this could sound like a build-up for someone like John McCain, or even, Heaven Help me, Gordon Brown. But you do want somebody whose bike has had the stabilisers removed for more than a few months when he takes office.*

But Milibrand looks so – well, what is it he looks like? That’s what’s been bugging me for a while. He reminds me of someone/thing. I mean, just look at the two pictures which the newspapers took to their hearts last week. The first has Gordo and YerBoy glad-handing each other, which at least makes it more difficult for each of them to launch a pre-emptive stab in the back on each other. 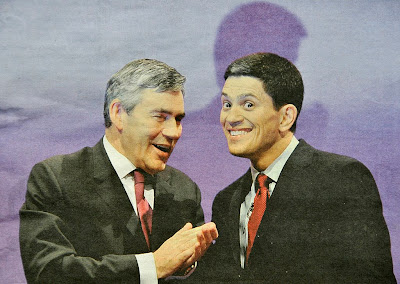 ONE DAY MY SON, ALL THIS WILL BE YOURS
And the second, well it’s a newspaperman’s dream, to be trotted out in perpetuity and ad infinitum. Jeremy Hardy brought it all into focus for me when he said that Milibrand had clearly forgotten one of the main rules of Politics - If you look like a monkey, never get photographed with a banana in your hand. 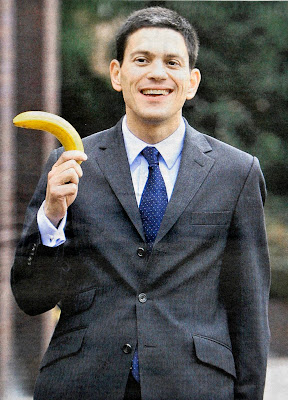 DAVID MILIBRAND WITH HIS BREAKFAST
All together now - A One, A Two, A One, Two, Three, Four –

Now I'm the king of the swingers
Oh, the jungle VIP
I've reached the top and had to stop
And that's what botherin' me
I wanna be a man, mancub
And stroll right into town
And be just like the other men
I'm tired of monkeyin' around!
I’m solid gone!

*Memo to self – check whether Pitt could ride a bike.

I'm not familiar with the political personae, but here's the Jungle Book vid (one of our household favs...)

You can embed the video directly onto your blog by pasting that code bit they provide on the upper right.