JUST A MINUTE, THAT'S ANOTHER ONE GONE

Sir Clement Freud is dead. At 84, not a bad innings.

A strange man, who will, I imagine, be described by most writers as “lugubrious”, a word which probably means that 99% of the population will not understand what the writer of a tribute to him, is trying to convey. Just look at the dog he paired up with in a petfood commercial and you’ll get the message. The dog is the one on the left. 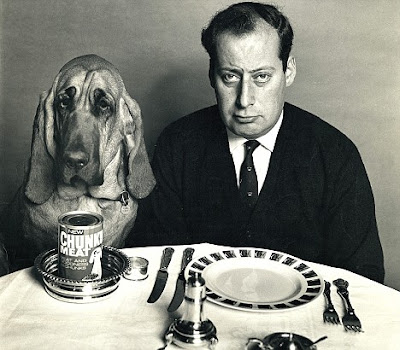 THE DOG'S NAME WAS "HENRY"

He (Clement Freud, that is) was one of those fascinating, increasingly rare characters who managed to dip his fingers, very successfully, into many pies. He was Aide to Field Marshall Montgomery in the Second World War, a Celebrity Chef, a Writer, a Radio panellist and broadcaster, an inveterate gambler – and a Liberal Member of Parliament for 14 years – a very rare beast indeed!! Grandson of Sigmund Freud, brother of Lucien and father of Emma, his family seems to be a collection of high achievers.

Speaking of MPs, coincidentally, or not, we’ve seen this week a particularly nasty bit of the underbelly of current British politics, with the Derek Draper/Damian (well named?) McBride saga of smear e-mails about Conservative MPs wives etc reaching a new low in the way our Political Parties (or at least, the Labour Party) choose today to conduct their business.

The contrast between Sir Clement’s approach to being a Member of Parliament, and the way it seems you have to behave as an MP today to ensure that your progress up the greasy pole is upwards rather than downwards is all too depressing. How many of the people who represent us in the mother of all Parliaments today are people who really merit a place there?

I’m not saying that yesterday is always better than today, but when you look at the way MPs behave, it’s certainly true in this case. I’ve just finished a book of World War 2 Diaries by Sir Allan (Tommy, don’t ask me why) Lascelles, who was Private Secretary to King George VI, and the comparison in these diaries between the way MPs handled themselves in the mid 40s when the country was, literally fighting for its life, and today, when, for the most part, it’s a “snout in the trough”, and bugger the rest of you attitude, is enough to make you lobby for a revolution.

Parliament then was a club where almost everyone got there on the back of achievements made in other walks of life. There was therefore a much wider level of experience, a wider knowledge, and much more of what I call “wisdom”. It used to be said that, somewhere among the 650 or so members, there would be a world expert on just about any subject on earth, and all you had to do was find him. Bee keeping, Nuclear Power, Indian History, there was usually someone there who knew more about it than anyone else. And so, the quality of debate was guaranteed to be higher. In addition, the integrity of the members, their diligence and sense of honour was of the highest order. We seem to have lost that – big time.

Today, following Blair’s deliberate, conscious, and unfortunately, successful, attempt over the last 10 years, to emasculate and destroy Parliament, the way the seat of Government actually operates today, almost makes it a pointless organisation. Only on very rare occasions, the last one I can remember being the revolt on the quite unnecessary 42 days detention proposal for terror suspects, does Parliament stand up and reflect the will of the people. And, even then, it only got the chance because the House of Lords threw the Bill out. By a million miles, that’s not what the population of this country wants from its governing body. But that’s what we’ve got.

The Clement Freuds of the world, independent people who did not have to rely on the MP’s salary to put bread on their family’s table, are an almost extinct species. A few of the others like Frank Field, Dennis Stringer, Tony Benn, the late Allan Clarke, are people who you would travel a long way to listen to – they held an opinion, with which you might not agree but you still wanted to hear it. They said what they thought, not what the party boss told them they needed to think, and the world (or at least this country) was a better place as a result.

The faceless automatons who drone on in Parliament today, using a language which is quite alien to most of us, follow the party line in a Stalinist-like slavish way. They are depressingly all too common, and seem to be the only ones who progress upwards in their respective parties.

Quite how we get Parliament to recover its rightful position as the forum for the highest level of debate in this country is quite beyond me. Perhaps Guy Fawkes had the right idea in 1605. It was just that he couldn’t keep his mouth shut, and someone blabbed about his intentions, that screwed him up. At least we still celebrate what he tried to do once a year, although I suspect too few of us really recall his intentions when the fireworks and the party starts.

This is something that really gets me wound up. Nobody in charge of any of the political parties seems even to care about this fundamental change. Mr Brown and his acolytes continue to trample systematically on the ways of democracy, and just occasionally something like this week’s email smear saga shows just what it’s really like if you lift the edge of today’s Political Carpet, and see the utter nastiness and ruthlessness which sits underneath it all. Brown adopts his standard “Nothing to do with me, mate” approach. But perhaps we now start to see Brown’s position, with Ed Balls’ involvement becoming more visible. It looks something akin to the way Watergate crept up to engulf Richard Nixon. If he didn’t know about it, he was incompetent, if he did know about it, he was complicit. You choose.

The parliamentary system in this country used to have a reputation which was held up throughout the world as a shining example of how to run a country. Today, it runs more like a corrupt Banana republic, and I hope that’s not being unfair to those Banana republics which still exist in the world. It’s not as if the way it’s run today even works.

Sometimes I’m not too proud to be British.

Unfortunately, that sort of news doesn't usually make it across the Atlantic.