REPEAT AFTER ME - "SAVES COST AND WEIGHT"

Rumours have been spreading for a couple of years now about how Ratan Tata, the Chairman of Tata Motors in India, was planning to build a “One Lakh” car. That’s 100,000 rupees or around £1,400. Now all of us bigheads who work in the European Motor Industry know perfectly well that building a car for that amount of money is quite impossible, so we all ignore the whispers and get on with our jobs. After all, replacing the cloth seats in my Audi with leather ones costs a bit more that that, doesn't it?

Except that a couple of months ago, he showed the car off in its final form. And it is a remarkable piece of work.

Tata’s aim is to offer a way for a massive section of the Indian population to stop carrying their family around on a scooter, and to have access to a new car for the first time ever. So, he’s done what the designers of all the really iconic vehicles do, and tear up the engineering history books, don’t even look at the competition, and start with a very simple question –

“What is it EXACTLY that I’m trying to achieve?”

When he had got the answer to that sorted out he clearly made sure that all the minions under him who were doing the detailed and strategic design work, keep looking at everything they were doing, and asked if the results of their labour was in line with the brief. If YES, carry on, if NO, start again.

Setting yourself a target of One Lakh as a selling price, as he did, forced some very unconventional thinking. Your first thought is – “That’s simply impossible.” And, in some ways you’d be right. You couldn’t produce a car for around 50% of the cost of the current cheapest car in India without addressing and changing some pretty fundamental things. 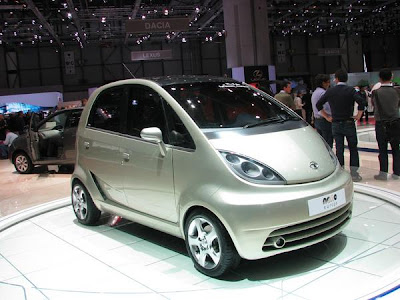 ACTUALLY, THIS IS THE EUROPEAN VERSION - NOTE THE ALLOY WHEELS!

The amazing thing, to my eyes at least, is that it still ends up looking pretty good. But when you look underneath the skin, you can start to see just how it has been done and that the sort of questions which were asked. Things like “How many wheels should it have?”, “How many doors, what sort of engine can we have, what’s the minimum level of performance we can live with, how low can we get it to weigh and so on.” Each of the answers leads to a way of improving the performance of one of the other important criteria. The more you lower the weight, the less power the engine needs, the simpler (say) the braking system needs to be, which in turn lowers the weight, which ……………….. - you get the point.

He ended up with a modern design that looks rather “cheeky”, but bears comparison in the way it has been conceived with the Citroen 2CV I eulogised over a couple of posts ago.

Although disputed by Tata, I have little doubt that its crash performance may not be up to the levels of European cars (which also saves weight and cost by the way), and some of the petrolhead journalists will whinge about this, missing the point completely. Tata was not trying to match European safety levels, but trying to offer an alternative to the current "MPV" mode of transport in India – in their case, the rickshaw or the scooter, seen everywhere carrying whole families around. The improvement which the Nano offers in terms of safety should be compared to the scooter/rickshaw alternative, not a fully specced Volvo.

The new car also gives birth to another argument, which is unwinnable by either side. This is where the additional CO2 emissions caused by introducing a whole segment of Asia to hundreds of thousands of this new fangled motor car, to which they currently don’t have access, in one fell swoop, speeds up the course of the Planet’s demise. Yes, it possibly does (if you actually believe everything you read about Global Warming, which I most certainly don’t), but the answer is simple – What are you going to do about it? Ban it? Bomb the factories where it’s built? Tax it out of existence? Actually, just there, I was about to set off a tangential ranting about the Global Warming, Flat Earth, Hair Shirt, lobby, but it’s Good Friday today (anyone know why it’s called “Good”?), so perhaps I’ll leave that one until another day.

So, back to the Nano. It they ever bring it to Europe, as they have intimated they will, the danger is that it will have to undergo a massive redesign, because it’s not "safe" enough for us. It will end up getting the full set of European safety standards built into it, as well, no doubt, as a turbocharged diesel engine with a six speed semi automatic gearbox, air conditioning, power steering, a full Bose sound system, electric reclining seats and all the gizmos none of us in Europe can live without. The weight will double, as will the price. They may even get round to think of calling it a Smart Car, except some of our German friends have got there already. And some people will think they’ve done a really good thing, missing the point, once again, completely.

I still fail to understand why there is such a fetish in Europe about occupant safety in cars. In this country we kill about 8 people a day in car crashes, and yet the industry is forced to spend billions of pounds improving the cars to be even safer and safer. The poor souls injured in these crashes are transferred into hospitals where they are subjected to such things like MRSA, which kills 10 times as many people, and which can be reduced/eliminated by getting a few people to keep washing their hands, which I suspect might NOT cost billions. Yes, I know it's not as simple as that, but there is a real element of truth in it.
My simple mind keeps coming back to the outlandish (or is it?) idea that the best way to improve vehicle safety is to put a large, sharp spike sticking out from the centre of the steering wheel just touching the driver’s sternum, as well as totally banning the fitment of airbags. This could, at the same time, be allied to the banning of comprehensive insurance for vehicles, so that you had to bear the cost of any accident yourselves and could only get the other party’s insurance Company to pay, if you were blameless.

If we introduced these small changes, everyone would drive more slowly, the level of noxious emissions would go down, the number of pedestrians injured by the car would diminish, the cost of motoring would reduce, you could fit more cars on any given road, so congestion would reduce, the number of car accidents would be lower, and the construction of the car could become so much simpler (saving cost and weight). I’m not sure where this all leads, but it seems to me that there is therefore a reasonably logical case for banning all the current cars being built in Europe, and turning all the current factories over to building only Nanos.

And Nanos with spikes sticking out of their steering wheels at that!

I just can’t imagine anyone in our Government having the balls even to think about such a thing. Perhaps a Royal Commission is needed, chaired by Jeremy Clarkson.
Posted by rogerc at 5:19 pm