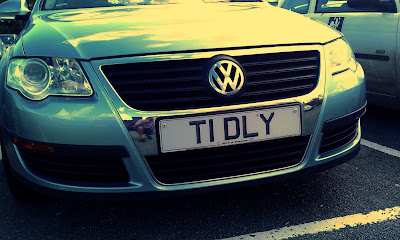 I wonder if he’s in the AA?
Notes to the above – If you live in the UK, you will immediately find that hilariously funny, and be truly amazed at the genius of the writer for pointing it out to you. If however, you live further afield, you may be wondering “What in heaven’s name is all that about?”

“Tidly” – in the UK, those of us with very short “sticky-out” bits improve our inner self confidence by paying huge sums of money to the Government who will then allow us to put hysterically amusing witicisms on the Registration plates of our cars. I’ve met an Accountant who had AUD1T on his (presumably Tax deductable) car, and I was overtaken recently by, I think, Paul Daniels in a mauve Jaguar sports car, with a very long bonnet and the number MAJ1C. All very clever.

In the far distant past I used to live in Buckinghamshire (which explains what follows rather well actually) and a gentleman, or at least I assume he was a gentleman, owned a Jaguar XJS, the one with another very long bonnet or hood which stuck out over the engine for several feet.

His Registration was PEN15. You had the feeling that you’d want to wash your hands before you met him.

Anyway, back to the plot. “Tidly” is not an English word as afar as I, and Chambers Dictionary know, but “Tiddly” is.

That’s the first semantic hurdle one needs to jump.

That’s the second semantic hurdle one needs to jump.

The third hurdle is the amazing pun on “AA”, which is the key, the kernel, which unlocks the explosion of hysteria to be found in the first sentence of this epistle.

In this country, when your car breaks down you call the Automobile Association (AA, get it?), who, after waiting for about an hour, drive up in a bright yellow van, poke around in the engine bay, tell you they can’t fix it, and that it will have to be towed away/put on a lorry to go to a garage. Many millions of UK drivers belong to the AA, which gives them a great deal of automobilistic comfort. In the USA, I think it’s called the AAA, the American Automobile Association, and in other countries I suspect something different. Canada doubles up the CAA (Canadian Automobile Association) with the CAA (Civil Aviation Authority), which is helpful, but destroys the point of the joke completely.

Now, in this country, if you end up getting “tiddly”, but in a serious, long term, having a quadruple Vodka for your breakfast, type of way, you can find salvation in the arms of Alcoholics Anonymous – or AA. The Twelve Steps and all that.

You may be getting some clues as to the nub of the joke by now.

Perhaps humour, like cheese, or a good friend of mine who shall be nameless, doesn’t travel too well.

Anyway, it seemed to amuse me at the time.

Sorry may well be the hardest word, but it is utterly inadequate here.

You should be down on your knees, begging for forgiveness.

Want some real (and topical) humour?

North Americans, eh? Unfortunately I needed your explanation to get it. ;-(