BEND OVER, OR THE DOG GETS IT! 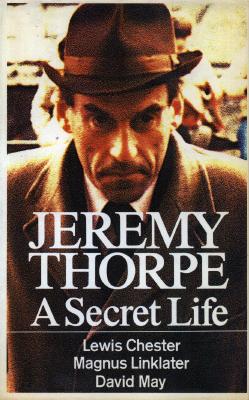 I watched the revelations about Charles Kennedy and the extent of his alcoholism and who knew about it last week, with that fixed fascination which always seems to accompany tales of the “Mighty Fallen”.

It immediately reminded me of the goings on of another Liberal politician, who, in the early 1970s, set off a far bigger story – one which today seems almost unbelievable but equally is almost forgotten – Jeremy Thorpe.

Jeremy Thorpe, with his Edwardian style tailored topcoats, fancy waistcoats, brown trilby and dandified demeanour, seemed as close to the heart of a Country Tory as could be imagined - or if not that, a rather ambivalent Undertaker. Yet, following an Eton, Oxford and President of the Union education, he became a Liberal politician. With his youthful looks and flare for publicity, he soon became Leader of the Liberal party in 1967, presiding over a significant party revival over the next 7 years. He even entered into significant discussions with Edward Heath, the well known sailor, conductor and Prime Minister, to form a coalition and become not just Liberal leader but to take on the position of Home Secretary in the Government –serious stuff then!

Rumours abounded all through his life about his sexuality, with a particular focus on an alleged affair with a former male model named Norman Scott. Scott said he had a homosexual affair with Thorpe in 1961, at a time when homosexual acts were still illegal in this country. Scott tells of his first physical liaison at Thorpe’s mother’s house where, in order to remain silent, he had to resort to “biting the pillow”. A compulsively delightful image!

Scott pushed these allegations during the early 70s, even selling love letters, purportedly from Thorpe, to the Press, one of which included the classic line “Bunnies can and will go to France”. You couldn’t make it up, could you?

In 1975, Scott was out walking on Dartmoor with a friend’s dog, when he was confronted by a former air-line pilot named Andrew Newton, who was armed with a gun. Newton shot and killed the dog, whose name was "Rinka", and pointed the gun at Scott, but it apparently jammed.

Newton was sent for trial and found guilty of the offence in 1976, with Scott, still presumably wanting his pound of flesh (no pun intended), reviving his claims of an involvement with Thorpe during the trial. The pressure from all this ultimately led to Thorpe resigning as Party leader.

When Newton was released from prison, he claimed he had been hired as a “hit-man” to kill Norman Scott. A year later, Thorpe, David Holmes (Deputy Treasurer of the Liberal Party) and two other were charged with Conspiracy to Murder. Thorpe was also charged with inciting Holmes to murder Scott. Heady stuff, what?

Another Liberal MP named Peter Bissell claimed to have had inside information within the Party about the conspiracy, and sold his story to the Press, appearing as a witness in the trial in exchange for immunity from prosecution.

Thorpe elected to remain silent throughout the trial, his defence’s case being that – Yes, he did know Scott as a friend, and that in order to put a stop to Scott’s continuing blackmail claims, Thorpe and his colleagues had discussed putting the frighteners on Scott, but not to kill him.

The case itself has gone down as one where Mr Justice Cantley was heavily criticised for showing a hugely “pro-establishment” bias. As part of the exquisitely balanced summing up required from any judge, he described Scott as follows –

“He is a fraud. He is a sponger. He is a whiner. He is a parasite. But, of course, he could still be telling the truth. It is a question of belief.”
That believe it or not is the judge speaking, not the Prosecution!

This amazing, one sided nature of the summing up was perfectly satirised by Peter Cook, at “The Secret Policemen’s Ball”, with a short piece cobbled together just minutes before the show. If ever you have the slightest doubt as to Peter Cook’s Comic capabilities, just read this.
Quote from The Secret Policeman's Ball (
1981)
Judge: [aloud] Ladies and gentlemen of the jury, it is now my duty to advise you on how you should vote when you retire from this court. In the last few weeks we have all heard some pretty extraordinary allegations being made about one of the prettiest, about one of the most distinguished politicians ever to rise to high office in this country - or not, as you may think.

We have heard, for example, from Mr Bex Bissell - a man who by his own admission is a liar, a humbug, a hypocrite, a vagabond, a loathsome spotted reptile and a self-confessed chicken strangler. You may choose, if you wish, to believe the transparent tissue of odious lies which streamed on and on from his disgusting, greedy, slavering lips. That is entirely a matter for you.
Then we have been forced to listen to the pitiful whining of Mr Norma St.John Scott - a scrounger, parasite, pervert, a worm, a self-confessed player of the pink oboe; a man, or woman who by his, or her, own admission chews pillows! It would be hard to imagine, ladies and gentlemen of the jury, a more discredited and embittered man, a more unreliable witness upon whose testimony to convict a man who you may rightly think should have become Prime Minister of his country or President of the world. You may on the other hand choose to believe the evidence of Mrs Scott - in which case I can only say that you need psychiatric help of the type provided by the excellent Dr Gleadle.
On the evidence of the so-called "hit man", Mr Olivia Newton-John, I would prefer to draw a discrete veil. He is, as we know, a man with a criminal past, but I like to think - ho, ho, ho - no criminal future. He is a piece of slimy refuse, unable to carry out the simplest murder plot without cocking it up, to the distress of many. On the other hand, you may think Mr Newton-John is one of the most intelligent, profound, sensitive and saintly personalities of our time. That is entirely a matter for you.
I now turn to the evidence about the money and Mr Jack Haywire and Mr Nadir Rickshaw, neither of whom, as far as I can make out, are complete and utter crooks, though the latter is incontestably foreign and, you may well think, the very type to boil up foul-smelling biryanis at all hours of the night and keep you awake with his pagan limbo dancing.
It is not contested by the defence that enormous sums of money flowed towards them in unusual ways. What happened to that money, we shall never know. But I put it to you, ladies and gentlemen of the jury, that there are a number of totally innocent ways in which that £20,000 could have been spent: on two tickets for Evita, a centre court seat at Wimbledon, or Mr Thrope may have decided simply to blow it all on a flutter on the Derby. That is his affair and it is not for us to pry. It will be a sad day for this country when a leading politician cannot spend his election expenses in any way he sees fit.
One further point - you will probably have noticed that three of the defendants have very wisely chosen to exercise their inalienable right not to go into the witness box to answer a lot of impertinent questions. I will merely say that you are not to infer from this anything other than that they consider the evidence against them so flimsy that it was scarcely worth their while to rise from their seats and waste their breath denying these ludicrous charges.
In closing, I would like to pay tribute to Mr Thrope's husband, Miriam, who has stood by him throughout this long and unnecessary ordeal. I know you will join me in wishing them well for a long and happy future. And now, being mindful of the fact that the Prudential Cup begins on Saturday, putting all such thoughts from your mind, you are now to retire - as indeed should I - you are now to retire, carefully to consider your verdict of "Not Guilty".

(Note – the line in pink italics was contributed to Peter Cook’s script by an up and coming young comedian named Billy Connolly.)

And Not Guilty, it was.
The jury spent 15 hours trying to break a 6-6 stalemate. But they came down on Thorpe’s side. It seemed that the Establishment had circled their wagons around Jeremy Thorpe, and the ring had held. His Establishment friends soon showed their other face however, when, as soon as the trial had finished, he was totally shunned in the world of politics. He disappeared from the public arena immediately, hardly ever having been heard of again.

There are continuing attempts to bring this story back to life – it beats anything Peter Mandelson, David Blunkett, Edwina Currey or any of the Division 2 scandals we see today. I suspect it will take Thorpe’s final demise to allow the 6 part TV drama, for that’s what it deserves, to be written and transmitted.
The only problem is, when it’s shown, most people will see it as a fanciful work of imaginative fiction. Those of us with a slightly odd interest in juicy political scandals over the years will know differently.
Posted by rogerc at 12:53 am

Very nice! I found a place where you can
make some nice extra cash secret shopping. Just go to the site below
and put in your zip to see what's available in your area.
I made over $900 last month having fun!
make extra money