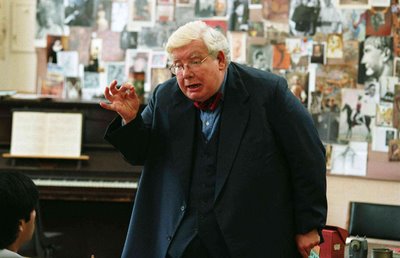 The point of the film is to contrast the effect on potential university students of two very different types of education in their school. The first is where the teaching is aimed simply at “improving and expanding the minds of the pupil”, but taking little cognisance of the future university, educational or indeed any specific needs of the boys – a pure “Pass the Parcel” style of learning where the simple expansion of the mind is seen as all important. The second, introduced into the school by a rather intense and zealous Headmaster is aimed at “tuning” the pupils for “Oxbridge” entrance. This style of teaching is aimed at maximising the University entrance rate, with pass rate being the be-all and end-all of the process. Written by Alan Bennett, and clearly extremely autobiographical, it started life in the theatre as a play, and most of the action, if that’s what you call it because there's not much of it, takes place in a school classroom.

It’s rather like a Yorkshire version of “Dead Poet’s Society”, set in a theatrical environment, with its exquisite dialogue reflecting Alan Bennett’s very personal attitudes to his upbringing. It's simply the best evocation of growing up, and the pains, pressures and joys of scholastic adolescent flowering I have seen.

The film uses the same cast which has been performing the play in the theatre for the last couple of years, and this shows brilliantly in the interplay between all the boys and the schoolteachers involved. They all seem to be so comfortable with each other, a state you get when the actors have been performing it together for a long time. You have to look beyond their real ages, which all seem older (because actually they are) than the “Upper Sixth” age setting of the film. But when you get past that, all the individual boys and teachers seem simply so “right” in themselves and with each other.

The star of the film is Richard Griffiths, as the “Pass The Parcel” ageing teacher - it's a real, subtle, jewel of a performance. His performance brings my own schooling back to mind vividly and immediately – the teachers at Bedford were often just like him. There is one exquisite sequence where he sits in a classroom explaining the meaning of a World War One poem to one of the boys - I suspect it was the boy in the group who Bennett wrote to represent himself. Richard Griffith’s acting here is subtlety brilliant – you see him in extreme close-up, and if ever you wanted to show someone a Masterclass in acting for film, showing how the slightest facial or vocal inflection can build the tension in a “take”, just watch that sequence. It’s simply perfect.

Whilst I had a real science “bent” at school, finding Physics, Chemistry and Maths a relatively comfortable combination, my efforts at the more “arty” subjects were, to say the least, much more of a struggle.

And yet, a couple of teachers, as a result of their force of personality, zest for learning and skill in teaching, wrought miracles on me, in the areas of Art and Music – Ted Amos and Ron Dalzell. I entered their classes being a perfect definition of a Musical and Artistic “philistine”, and as a result of their amazing ability in both subjects to “Pass the Parcel” onto an originally very unwilling me, they changed my life immeasurably. I have loved pictures and all sorts of music since their genius and magic was sprinkled over me, and I am eternally grateful for their efforts and the change they made in me. The sad thing is that neither of them would have even realised just what they had done.
Such is the profession of the teacher, and probably explains why “The History Boys” made such an impression on me. It’s not an “exciting” film, and there are no real action sequences, but as a film to savour, written by a master and vividly bringing back a large chunk of one’s personal history and putting it in context, it’s a real joy to watch.
Posted by rogerc at 9:33 pm