Cartoon by "Matt"
There’s a real sense of enjoying the power of the electorate when you see the changes brought about by the American voters last week. Even though only 2 in 5 voted, there has been a significant rebellion against the antics of Dubya and his cronies, and the seeming “single issue” polarising effect that the Iraq war has had on electoral politics over there shows what can be done by disaffected voters. It remains to be seen whether this is a “One Off” protest vote, with next time showing a return to the “It’s the Economy, Stupid” Issue winning the next election for the Republicans.

Those of you who are aficionados of “The West Wing” will see all kinds of resonances in the goings on last week. Sometimes I think the best idea is to sit through the 156 episodes, and then watch reality copy the plots you saw first in Aaron Sorkin’s masterpiece. I swear the politicians are just following the scripts to make it easy for themselves.

The message is clear though, and the departure of that nice Mr Rumsfeld, seems to signal at least a belated start on the road to digging themselves out of the awful mess they have all created. One has to say that seeing the back of Rumsfeld gives one a bit of a rosy glow. Is there anyone out there who regrets his departure?

Even Richard Nixon, 35 years ago, thought him to be a bit of a hard man. Nixon’s comment in 1971 was - “…at least Rummy is tough enough, … He's a ruthless little bastard. You can be sure of that." For reasons none of us over here can begin to comprehend, he is both the Youngest (1975-1977 – age 43) and the Oldest (2001-2006 – age 74) occupant of the position of US Secretary of Defense (Sorry about the spelling, but America’s a very young country). You would have thought they’d have learnt, wouldn’t you? 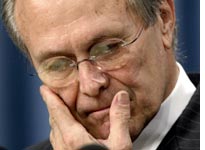 I think we all agree that the man has a fair amount to answer for, but, in the end, it’s his poetry which we will concentrate on here. There’s a lovely web-site dedicated to the outpourings of Rumsfeld’s Inner Wit, set in some form of demonic Iambic Pentametric blank Verse, known only to a select band of US highflyers.

I am indebted to Hart Seely (http://www.slate.com/id/2081042/) for these heartfelt jewels, culled, if that’s the right word, verbatim from the great man’s lips. Winston Churchill, eat you heart out and turn in your grave – You choose the order.
The Unknown
As we know,
There are known knowns.
There are things we know we know.
We also know
There are known unknowns.
That is to say
We know there are some things
We do not know.
But there are also unknown unknowns,
The ones we don't know
We don't know.
Clarity
I think what you'll find,
I think what you'll find is,
Whatever it is we do substantively,
There will be near-perfect clarity
As to what it is.
And it will be known,
And it will be known to the Congress,
And it will be known to you,
Probably before we decide it,
But it will be known.
A Confession
Once in a while,
I'm standing here, doing something.
And I think,
"What in the world am I doing here?"
It's a big surprise.
I was going to say, “Don’t give up the Day Job”, but he just has!

Well, that’s one down. Who’s next?
And to finish, a litlt snippet from last Thursday's newspaper. The voting machines in Illinois were playing up apparently, and one frustrated voter was moved to smash the screen with what was described as a cat shaped paperweight (Now why would anyone going to vote carry a .... - Oh forget it!). The officiating officer's typically PC response was "It's a Touch screen, but he overdid it!".
Excellent!
We should sell them some little brown pencils attached by string to the side of the booth. That would sort them out.
Posted by rogerc at 11:23 pm