I have spent the last week recovering from our Cricketers’ amazing performance in throwing the 2nd Test away, and finally managed to write my thoughts down, which I finally published last Wednesday, just after the first day of the 3rd Test had finished. True to my form as a pundit, I got it completely wrong, haranguing most of our team for playing, for the first two matches at least, like a team of Big Girls Blouses.

In that blog, I threatened to eat my hat if they ever managed to get their act together, and start to make a game of it all. As is the way of things, the first day of the Perth test showed England in a totally different light, winning the day all ends up. Australia was bowled out for 244, and we ended the day on 51 for 2. Panesar took 5 wickets, so that at least is a resounding “Yaa Boo Sucks” to the England team selectors.

My faith was therefore recovered, all was well in the house, Duncan Fletcher wasn’t an idiot after all, and I felt pretty good. So, in a fit of Sauvignon Blanc driven magnanimity, in spite of England’s terrific performance, I Published.

Or so I thought. The next two Cricketing days were, to say the least, not England’s finest. Watching Adam Gilchrist put together the second fastest 100 EVER was astounding. Anyone who thinks cricket is a gentle game should watch a replay of his knock. It was utterly brutal – a man on a total mission to destroy the other side. He will probably never have another day like it, and although it put a huge dent in England’s chances, it was quite riveting to watch. And, to make it even worse, it built on centuries from Hussey and Clarke, as well as a nearly one from Ponting, to put Australia into an position where an England win, or a draw seems a tad unlikely.

So, by rights, I should stand on ceremony, and keep my hat firmly on the hat-stand. But being ever the optimist, after the first day, I thought England might just do it.

And in an attempt to help them along, I thought if I did indeed eat my hat there and then, that keeping my side of the bargain would put them under some form of moral obligation to keep theirs. 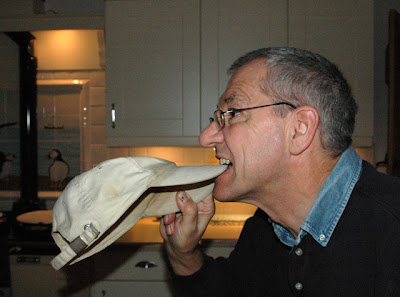 THE AUTHOR SHOWING AN UNCOMMON LEVEL OF HUMILITY

Oh well, you win some, you lose some!

This is a great article. It gave me a lot of useful information. thank you very much.
sushi-cat2.com