YOU CAN'T MAKE IT UP, CAN YOU? 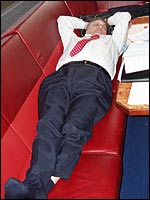 What is Prescott about?
We seem to have lost him off the radar recently, what with the Croquet, and the Affair. But, here he is again, this time anointing the Portuguese with spatterings of his “Green” credentials at Meeting of the Party of European Socialists.

Firstly, at short notice, he had to condense a prepared ten minute speech into five minutes. Apparently his novel technique to solve this problem was to speak twice as quickly as he had previously planned to do – actually for him, that’s a terrifyingly logical solution to the problem. Mind you, the thought of listening to the Good Man précising a speech on Socialist Greenery, on the fly, would have us all hiding behind the sofa. His approach to the concept of the Precis would probably be to read out each alternate word, and coming from him, that might just make as much sense as the original would have done.

But no, instead of that, the audience were treated to a uniquely Prescottian “scattergun” approach to oration. Actually, as a bye-the-bye, what is the adjective pertaining to Prescott – Prescotty (as in the dog), Prescotts (as in the Guards), Prescotch (as in the Whisky), Prescottish (as in the Highlands), or Prescottian (as nearly in Nova)?

Anyway back to the story, in the middle of his speech he seemed to get really wound up, and lost his way a bit, and in response to the inevitable “Spit it out!”, he did precisely that ,and fired one of his incisors at a member of the audience. He had presumably just got to the rousing “We shall fight tooth and nail …….” bit at the end, and got a bit carried away with the metaphor.

In his defence, it would seem the man has been undergoing dental work (A Bridge Too Far?) and what came out of his mouth was a part of the Work in Progress.

He managed to finish the speech, though I simply can’t get my head around John Prescott lisping his way through an extemporised Green speech in Portuguese. There seems way too many pitfalls there for the DPM even to contemplate. But there you go.

In normal Blairite fashion, the Labour apparatchiks at home had to put their spin on the issue, to try and recover some sort of normality out of this little gem. But even they seem to have failed here. All that seemed to come out of the Machine, when asked for the inevitable comment by the Media, was that his Private Office was “tight-lipped”.

Ho, Ho, Ho! Bit late for that, I'd have thought.
Christmas Humour, Westminster style.
Posted by rogerc at 12:01 am