NOW THIS IS AN ADAGIO

THE STORY SO FAR

There I was yesterday, sitting in the doctor’s, waiting for the practice nurse to give me my annual bollocking for not eating enough nuts and berries in my quest to avoid another heart attack, when I picked up one of their magazines to read. The small article I read, I simply thought someone was pulling my leg – big time. Especially when I looked at the date on the cover, and saw it was April 2006.

It talked about a piece of music by John Cage, an avant garde experimental American composer who died in 1992. The piece rejoiced under the catchy title of Organ2/ASLSP. Now the only piece of music I’ve heard (if that’s the right word) by John Cage is his 4’33”, which is a work performed in three movements, and lasting (yes, you’ve guessed) for 4 minutes and 33 seconds, without a single note being played. It was broadcast a while back from the Barbican, and a very strange feeling it gave off, watching a packed house sitting quite still during the performance. 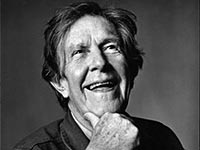 JOHN CAGE
This other piece, where the ASLSP means “As slow as possible” is actually being taken very, very, very literally. Originally written as a 20 minute piece by Cage, the work is currently being performed in a beautifully restored church in Germany.

This particular performance is planned to last for 639 years. It started in 2001, and its completion is expected in 2640. In this piece, Cage was fascinated by “the discovery of slowness”, and the symbolism of the “planting of a musical apple tree”. Apparently his aim was to “rediscover calm and slowness in today’s fast changing world.” Well, even after his death, he’s done that in spades. The location for the performance is St Burchardi’s Church, in Halberstadt, Germany, an old ruined building which has been painstakingly restored to act as the home of this strange project. The 639 years comes from the length of time which had passed between the building of the church in the mid 14th Century, and its recent restoration. The team putting on the concert, wanted to match the life of the building with the length of the music’s performance, so 639 years it is. 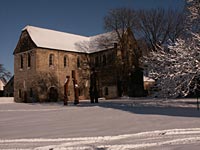 Apparently the first 1½years of the performance were total silence, and then a couple of notes started to play in July 2004. The piece is playing continuously (click on http://www.john-cage.halberstadt.de/new/index.php?seite=cdundtoene&l=e to hear it), and you can visit the church during the week to hear the action. The notes are held lovingly down on the keyboard by weights, and the next new note is due to be played on July 5th 2008.

Rather bizarrely, to fund the project, you can “Book a Year”, and the performance during that year will be “yours” for €1,000. You may think this would have no takers, but the first year currently available is 2014, and the range already sold is quite mystifying. You can understand someone buying the last year, so they could be there, at least in spirit, at the music’s climax, but 2553? Someone must know something I don’t.

I have to say, I thought this was an April Fool’s prank when I read the short article, but a swift trawl of the Internet proved my suspicions totally wrong. Some wag has seemingly already tried to get the 72 terabyte download from KaZaA, and apparently there are people already waiting for the 5,597,640 CD Box Set, even though the timing of its release is still unconfirmed.

I really don’t know what to say about this – I find the thought of it all quite unnerving. But listening to it for a few minutes does set your mind going, and if that was Cage’s intention, well he’s succeeded. I even suspect that an afternoon in the exquisite surroundings of St Burchardi's in Halberstadt would be a strangely moving experience.

I’ll bet you the seats for July 5th 2008 are already sold out. Extraordinary!

I heard some of this on the radio, shortly after the end of the initial 1.5 years' silence.

Sounded pretty good to me.