CRICKET'S A GIRL'S GAME UNDER IT ALL

This piece was written a couple of days ago, and due to, as Harold Macmillan once said, “Events, Dear Boy, Events”, I’ve only just got round to publishing it. I’ve also just heard the score after Day One of Test Three, and hope that I may yet have to eat a good part of the hat I’m currently wearing.

Nothing would give me greater pleasure. And anyway, none of us know whether the team’s underwear is different for this match – See Below!

You see it written today that, for many people, Sport has now taken the place of War and Tribalism. It does seem to sit toweringly in many (usually Men’s) people’s list of the Most Important Things in Life. That’s not the case with me, so I’m probably a bit weird.

Except for last week, and THE CRICKET.

I simply didn’t understand why at the time, but the personal impact of our team losing the 2nd Test Match was far more dramatic than I could have imagined. I’d been daft enough to sit up until what a friend eloquently described as “Burglar’s Hours” watching the first two matches in Australia. Last week, for the first four days of the game, I had four 3 o’clock in the mornings on the trot, and interestingly not a great deal of sympathy from The Steering Committee as a consequence.

Come the last day, I chickened out at 1 o’clock in the morning, with our batsmen, at 61 for 1, getting some batting practice in, as the Draw obviously and inevitably approached.

To hear the ghastly details of what actually happened, painfully spelled out later in the day, brought me up with an involuntary shudder – something very few sporting occasions have ever done.

There have been acres of punditry since Black Tuesday, explaining the whys and the wherefores, and I’m not sure anyone has stood back and got the whole picture yet. One of the reasons Cricket is such a good game, is the huge psychological element which plays itself through the whole of the period covering the lead-up, the actual game itself, and the aftermath of the action. It’s literally part of the game’s fabric.

One writer was looking back to find a sporting parallel where such a crushing defeat was carved out of such a strong winning position, and the best he could come up with was Devon Loch blowing it all 50 yards from the line in the 1953 Derby. I think he should have looked at the 1981 Ashes where the Australians must have felt much the same after Botham with the bat, and Willis, with the ball, pulled a cricketing rabbit out of the hat.

But the event which comes to my mind was in the 1996 Masters Golf tournament, where Greg Norman led by 6 strokes from Nick Faldo going into the last round, and managed to lose by 6 strokes to Faldo, eighteen holes later, having played a life-changingly disastrous round of golf. Norman, gracious in defeat, claimed basically that it was only a golf game, and that no-one had died that day, so no big deal. Except that, magnificent golfer that he was, he never won, or got anywhere close to winning, another Major. Whenever he got anywhere near contention, you can just hear those whispers of doubt coming into his mind – “Remember Augusta 1996”, and that was it gone. Let’s hope that’s not the mind state of the England team out in Perth.

But here we are, at the start of the next test, and what have we learned? Apart from the fact that the Australians have some really top class Premier league batsmen, and in people like Shane Warne, a decidedly useful bowler. The other thing they seem to have is an utterly burning desire, not just to win, but to crush us. They never let up, and you’ve got to admire that immensely. I think they have a desire not just to win back the Ashes, but to take this series 5-0. Just to show the world that 2004 was an aberration, and that they are simply resuming their rightful place on top of the world.

But it’s not all gloom and doom. We’ve shown, in fits and starts, the capability to bat well – just remember Collinwood and Pieterson in the last match. If that wasn’t a class act, I don’t know what is. But look at the bowling. Our fastest strike bowler Harmison is playing like a .... You fill in the detail here. His attitude and demeanour says it all – he seems as if he’d rather be almost anywhere else other than on a cricket pitch, and don’t you think the Australians haven’t picked that up. His combined bowling figures in both Tests are 1 for 288. And when you add Anderson at 2 for 303, and Giles, the man at the other end, stopping the flow of runs and spinning them into a state of bamboozlement with figures of 3 for 262, you don’t have to look far for one main reason for the current state of play – between them that’s 6 for 853 in 4 innings! Bring on Monty!

But what about our self-belief, our confidence and our inner desire to thrash the living daylights out of them - that’s where we simply don’t come up to scratch. We need some form of psychological brainwashing to erase the memory of the first two matches, and instil a new self-belief in the players. You can just imagine the whisperings of Warne and Co, as soon as we get anywhere near a winning position – “Remember Adelaide, Remember Adelaide”!

I’m reminded of the film “Bull Durham”, starring Kevin Costner, Susan Sarandon and Tim Robbins. It’s a real, feel-good Baseball film which focuses on the mind games which go on aimed at making people play well. Tim Robbins, as the rookie Pitcher was throwing the ball all over the park and couldn’t get his pitching act together at all (an interesting resonance with Harmison). To make him focus and play his natural game, she got him to wear one of her suspender belts under his kit – to free up one half of his brain, and to stop him thinking too much about the next pitch. And it worked! 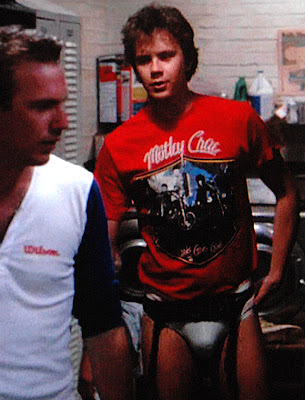 Now I bet Duncan Fletcher, who to my mind bears a lot of blame for where we are in this series, hasn’t thought about that one. I mean, Harmison’s playing like a big girl, so wearing their underwear probably isn’t that bad an idea. I think I’ll send them a copy.

I have a feeling they’ll need something a bit different.
Posted by rogerc at 12:50 am